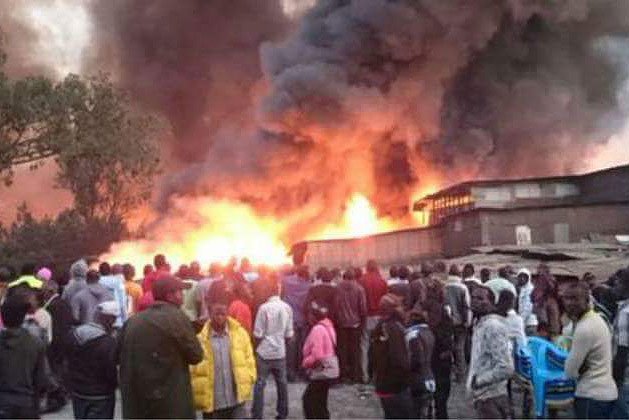 More than 900 traders at Gikomba market have sued Nairobi County government demanding Sh20 billion in compensation over frequent fires that have razed the market and their property including stock.

In a case at the High Court, the traders are demanding payments for direct financial loss and compensation for loss of business opportunity and re-establishment costs as they list 15 fire incidences since 2015 where the county government has failed to take adequate precautions for their safety and that of the public while doing their business at the ultimate second hand clothe market.

Gikomba traders also cited a fire incident that occurred on June 28, 2018 which claimed 15 lives while hundreds escaped with severe injuries. Through their lawyer Adrian Kamotho, they claimed that all their attempts to rebuild their businesses have been devastated by recurrent fires.

They are further accusing the county government of negligence and failing to put in place a suitable continuity plan to sustain the business environment at the market which has had adverse effects on the economy.

But fire accidents have remained rampant at Gikomba despite the traders remitting levies, rates and license fees among other charges collected by the reluctant county government.

“The Plaintiffs are at a loss as to why the Defendant would act so negligently, in breach of contractual and legal duty,” Kamotho said.

The traders are also pushing the court to compel the county government to establish a fully equipped fire station in the market within 60 days to help in combating future fire accidents.

In June, fire razed down a section of the country’s largest open air market, leading to losses amounting to millions of shillings after past promises by the government to curb the menace proved futile.

President Uhuru Kenyatta once promised stern action against anyone found culpable but even investigations he ordered in 2017 have not provided answers to the numerous fire outbreaks which have caused destruction at the market. Traders suspect that the fires have been fueled by tussles between tenants in county houses and land grabbers.

Kenya Insights allows guest blogging, if you want to be published on Kenya’s most authoritative and accurate blog, have an expose, news TIPS, story angles, human interest stories, drop us an email on [email protected] or via Telegram
Related Topics:Gikomba fireGikomba land tusslesNairobi city county
Up Next