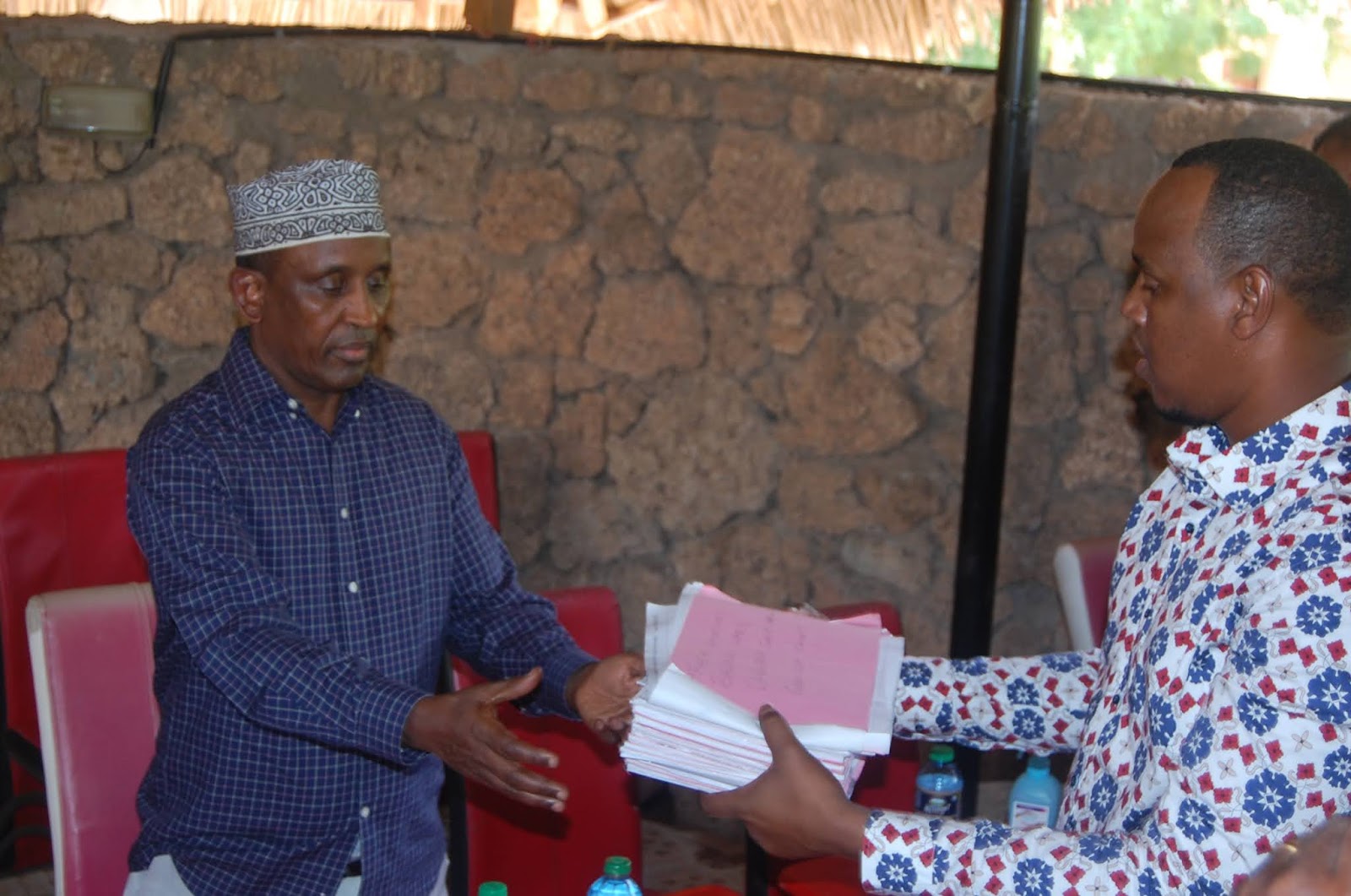 A   section of leaders from Garissa county have thrown their weight behind the Building Bridges Initiative (BBI) report saying they will continue lobbying for inclusion of their proposals left out in the document.

Led by Garissa governor Ali Korane, the leaders who included Dadaab MP Mohamed Dahiye said that they would rather lobby from within, other than totally oppose the document, which they termed as ‘generally good’.

Speaking at the Government Guest House Thursday, where they received BBI signature collection booklets from the 7 sub-counties of Garissa Township, Hulugho, Ijara, Balambala, Fafi, Lagdera and Dadaad, the leaders said that they will continue engaging the two BBI proponents’ President Uhuru Kenyatta and ODM leader Raila Odinga saying ‘it’s never too late to slot in their proposals’.

Korane said as leaders they will continue pushing for hiving off of Hulugho constituency out of Ijara parliamentary area because it meets all the required threshold.

His sentiments were echoed by Dahiye who said that the entire of North Eastern region was given only one constituency in Mandera county in the proposed BBI recommendations.

“I want to support my fellow leaders in pushing for the creation of Hulugho constituency and also the splitting of Wajir south constituency into two. We shall rally all the leaders from the region in parliament and senate to push for inclusion of the remaining proposals,” Dahiye said.

Korane said, ‘it would not go down well for leaders from North Eastern to oppose the BBI even after the Garissa senator Yussuf Haji was given the singular honour of chairing the BBI taskforce.’

“We have had faith in the process all along because our elder and senator Haji was chairing the taskforce. It will not augur well with us as leaders to now turn our backs on a process we have all along believed in,” Korane said.

Garissa county assembly speaker Ibrahim Abass urged the MCAs whom he termed as well learned to critique the document before passing it.

Abdirizak said that Ruto has since the handshake been opposed to every move to unite Kenyans through the BBI process.

“I want to ask our deputy president to come out and declare his stand on the BBI. If he is opposing it, let him tell us and we meet at the ballot. He cannot keep on shifting goal post each day,” Abdirizak said.

On Tuesday, Amani National Congress (ANC) party leader Musalia Mudavadi hit out at Ruto over his push for consensus on the BBI bill.

This comes after the DP on the same day hosted his allies at his Karen residence and thereafter held a press conference saying the BBI referendum should be held in 2022 alongside the general election to allow time for consensus-building as well as to save costs.

Mudavadi, in a post on social media, told off Ruto saying that despite consensus being important, time is of the essence as far as the BBI issue was concerned.

The ANC party boss further accused the DP of taking Kenyans into endless circles as he was afraid to commit to a particular stand.

Related Content:  Explainer: States To Watch Closely On Election Night
Kenya Insights allows guest blogging, if you want to be published on Kenya’s most authoritative and accurate blog, have an expose, news, story angles, human interest stories, drop us an email on tips.kenyainsights@gmail.com or via Telegram
Related Topics:
Up Next