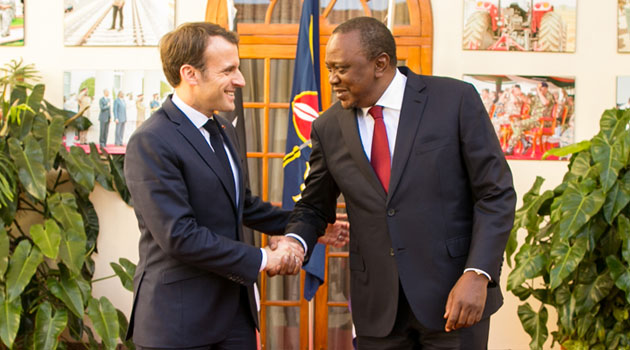 Kenya was expected to ink the deal during President Kenyatta’s two day visit but Transport Cabinet Secretary James Macharia said the trip did not bag the deal, which was expected to fund the construction of the five kilometre metre-gauge line linking the airport to standard-gauge rail (SGR) terminus in Syokimau.

“No agreements were signed, we just reviewed progress towards the launch of the project,” CS Macharia said.

The president’s previous visits to the French capital had signaled that an agreement on the loan would have been closed by June 30 when he was back in France.

Failure to secure the loan now spells doom for the project that was initially set for August according to the talks between French President Emanuel Macron and President Kenyatta in March 2019. A number of French investors also signed deals worth over Sh300 billion when Macron visited Nairobi but French-Chinese rivalry over the railway deal has continued to play out. 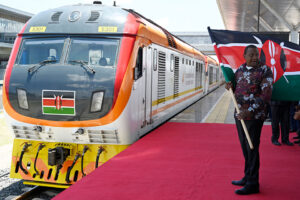 The Chinese Embassy in Nairobi hurriedly took Kenyan government officials, Mps and journalist on a tour of the SGR project just days after Macron left Kenya- a PR exercise that was meant to pull Kenya out of the deal with France.

The JKIA-Nairobi city centre railway line is part of an ambitious plan to ease congestion in Nairobi and shorten the time taken between the CBD and JKIA which handles more than 11.7 million domestic and international fliers in a year.

Jomo Kenyatta International Airport is 20km from the capital’s central business district, a distance that should take less than 30 minutes but takes up to 2 hours due to heavy traffic on the busy Mombasa Road.

But tender wars have also derailed the construction of the linking rail and the deal that was expected to be signed between Kenyatta and Macron.

The National Treasury had read mischief over the secret procurement of a consortium of five French firms including Egis group that had lined up to build the new railway line on the back of a financing deal between France and commercial lender BPI France Assurance Export.

Other french firms eyeing the construction deal include Sogea-Satom, Alstom, Thales and Transdev but the Egis was dropped for failing to comply with the law.

China which provided about Sh500 billion in loans for the construction of the SGR line from Mombasa to Nairobi is also interested in the deal despite critics raising concerns over Kenya’s ballooning debts and Chinese loans. They are hell bent to ensure that Kenya’s deal with France does not see the light of the day.

Kenya Insights allows guest blogging, if you want to be published on Kenya’s most authoritative and accurate blog, have an expose, news TIPS, story angles, human interest stories, drop us an email on [email protected] or via Telegram
Related Topics:Emmanuel MacronJKIA-CBD railKenyan debtsPresident Uhuru Kenyatta
Up Next