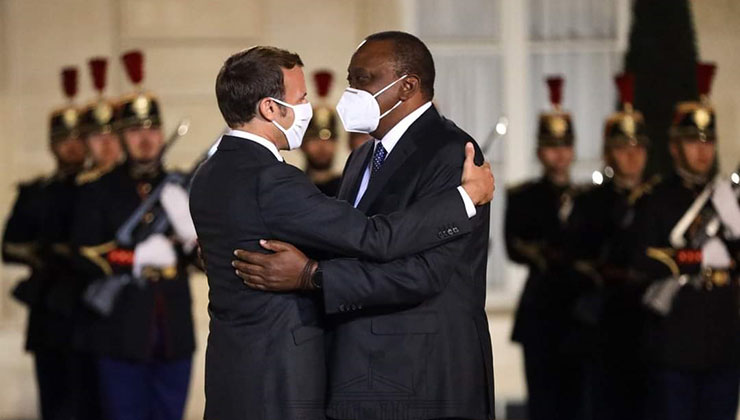 President Uhuru Kenyatta kicks off his official visit to France at Elysee Palace where he was received by his French host Emmanuel Macron on Wednesday night, September 30, 2020.

Africa’s booming economies and population have created lucrative opportunities for international players, making the continent a hotbed of geopolitical competition over the past decade. The International Monetary Fund found in 2019 that Africa had become the world’s fastest-growing region, with the World Economic Forum predicting its population would double to around 2.2 billion by 2050.

China is Africa’s biggest bilateral trading partner, having surpassed the US in 2009. Before the coronavirus crisis hit the world economy, the value of Sino-African trade reached €161 billion ($192 bn) in 2019.

“Right now you could say that any big project in African cities that is higher than three floors or roads that are longer than three kilometres are most likely being built and engineered by the Chinese,” Dave Roggeveen, the founder of specialist publication MORE Architecture, told Forbes in 2018.

As well as infrastructure, China has invested massively in media in Africa – with state-run Xinhua News Agency developing the continent’s biggest network of correspondents. Nairobi is at the centre of China’s African media presence, with Xinhua moving one of its headquarters from Paris to the Kenyan capital in 2006.

France is now also seeking to make new inroads on the African continent by tweaking its strategy towards developing nations. Paris has managed to increase its global aid budget even amid the coronavirus crisis, with development spending rising from €10.9 billion in 2019 to €12.8 billion in 2020.

On March 2, French MPs approved a bill increasing France’s aid budget to 0.55 percent of GDP by 2022. President Macron’s government is also stepping up efforts to ensure the aid money is effective. The draft law enshrines five key objectives – “to fight against poverty, to counter climate change, to bolster public health, to expand education services and to achieve gender equality” – focused on Sub-Saharan Africa and also Haiti.

“International solidarity has never been more necessary than it is now,” said Louis-Nicolas Jandeaux, a spokesman for Oxfam France. “The Covid-19 pandemic shows us how so many major challenges – like fighting poverty and protecting public health – are connected. Given that France is a leader on these multilateral issues, and given that French President Emmanuel Macron has spoken so much about boosting international co-operation, France really has to set a good example on issues like aid spending.”

The bill also seeks to give France more bang for its aid buck by merging its two development agencies. The French Development Agency – which bestows loans and grants – will be merged with France Expertise – which focuses on the nitty-gritty of development project logistics. This merger will allow French aid workers to “respond better and more directly to the needs of the countries we’re working in”, said Jérémie Pellet, director of France Expertise.

The law includes a plan to repatriate “ill-gotten” assets the French justice system has confiscated from foreign leaders. France has made efforts to go after corrupt politicians who have stashed millions on French soil. In 2020 a Paris court sentenced Teodorin Obiang, vice president of Equatorial Guinea, to three years in prison and a €30 million fine for laundering money through French properties.

Redirecting illicit money back to the people is also part of a diplomatic strategy to boost France’s image in Africa.

“This aspect seems so morally sound that it’s almost impossible to be against it,” said Magali Chelpi-den Hamer, the head of the humanitarian and development programme at Paris-based think-tank IRIS (the French Institute for International and Strategic Affairs). “However, the volume of money concerned will be relatively low.”

France has had a long and complicated relationship with Africa. It gained control of vast swaths of the continent – mainly by seizing most of western Africa – in the competitive conquest of the continent launched by European powers from the 17th century.

After a wave of successful independence movements in the 1950s and 1960s, France maintained close relations with many Francophone ex-colonies in a policy that came to be known as Françafrique. Advocates of this approach saw France as a guarantor of stability on the continent, but critics saw France as loath to give up its colonial-era influence and continuing to play a clientelist role.

The French state’s focus on Africa waned in the 1990s as it turned its attention toward European integration. But France has once again set its sights on the continent to counter China’s rising influence.

And this time France seeks to ensure that its activities on the continent do not carry any reminiscence of neo-colonialism, with a new aid policy favouring grants over loans.

Analysts have become increasingly concerned about China creating debt traps with its hefty loans to African countries, for which it is the biggest bilateral lender. Chinese loans to underdeveloped countries are even bigger than indicated by the official figures: around half of them are not reported to the International Monetary Fund or World Bank, a report for German think-tank the Kiel Institute for the World Economy found in 2019.

Until now, France has not had a stellar record on loans either: in 2018, half of its development aid was in loans instead of grants, according to Oxfam. Nevertheless, while “Western countries also use debt to gain influence in African countries, unlike China they’re very keen to avoid setting debt traps,” said IRIS’s Chelpi-den Hamer.

“We’re fighting China in a battle for influence – and a battle over what system of government countries should see as their model,” French Foreign Minister Jean-Yves Le Drian told France Inter radio last month.

China’s increasing involvement in Africa threatens to “end up being negative over the medium to long term”, Macron warned at a press conference in Djibouti on his 2019 African tour.

“I wouldn’t want a new generation of international investments to encroach on our historical partners’ sovereignty or weaken their economies,” he added.

France’s aid reform bill now goes to the Senate and is expected to become law this summer.

This article was translated from the original in French.