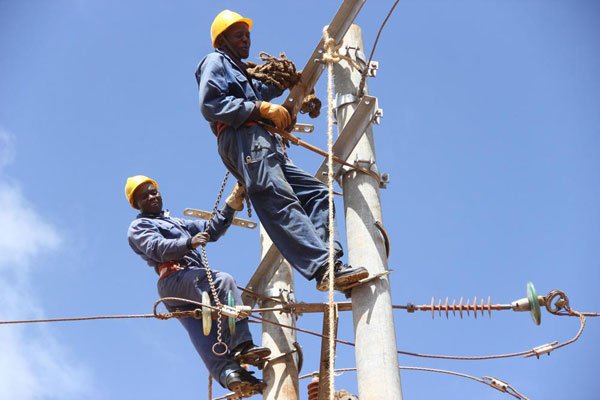 Kenya Power in February said in tender documents that it was seeking 76,657 treated wooden poles from local firms to connect more consumers to the national grid.

This was to complement concrete poles.

In a U-Turn announcement, the company had announced the search for commercial tree farmers to supply mature logs that will be processed into electricity poles.

Unshockingly, Kenya had put a ban on logging in February 2018 following a public outcry over diminishing water levels in the country’s key rivers. The utility firm restricted the tender to local manufactures of wooden poles with outstanding order balance of less than 50 percent of the contracts with the power monopoly firm.

According to new investigations done by The Nation, the winners of the tenders have been unveiled as tycoons and well connected individuals in the country.

Equity Bank founder Peter Munga leads the pack. His Greystone Industries Ltd, owned by Mr Munga and Kiewa Group Ltd, which is owned by his family, has won a tender worth Sh35 million to supply concrete poles. Mr Munga’s concrete poles plant was established in 2015, through a Sh1 billion investment commissioned by DP William Ruto. It sits on a 30-acre piece of land.

Munga himself is not new to controversies, over the past few the Bank’s founder has been embroiled in a bitter court battle with his friend turned enemy Joseph Muturi Kamau.

The battle involves Sh. 150 million which Kamau says Munga has refused to pay him.

Kamau alleges that since 2011, Munga has refused to pay him and his firm Bethany Vineyards for three million Transcentury shares worth Sh. 150 million that he purchased from the firm. Kamau sold the shares in 2011 at Sh. 50 each to Mr Munga after failing to settle a Sh. 40 million loan he took from Equity Bank. The deal was to see Mr Munga clear Mr Kamau’s loan and remit the balance to him and his firm.

However, court papers say that Munga only cleared the loan balance then refused to remit to him or Bethany Vineyards the balance.

At one point during the court fight, Munga is said to have asked to be allowed to settle the case with Kamau outside the court. He offered to pay Kamau Sh. 90 million. However, Kamau declined the offer and returned to court asking for the full amount.

Also in a different matter, Munga was mentioned in a whistleblower report in what nearly collapsed Housing Finance Bank. Munga was alleged to have liaised with the then bank’s CEO Frank Ireri who’s also his in-law to acquire a dangerous unsecured loan.

Court filings showed that Mr. Ireri signed off one of three loans worth Sh660 million awarded to firms owned by Munga.

Apparently, Ireri also extended a Sh133 million loan to his in-laws through a company called Ryan Properties Ltd, Sh10 million, which has never been paid, to his nephew’s Ecomaji Ltd and Sh150 million to Munga’s Equatorial Nuts.

In signing off these loans, Mr. Ireri overruled his colleagues from the credit department which had found the applicants not fit to be granted loans.

“The developers are Ireri’s in-laws and despite my indicating to him that he should not be signing this without disclosure, he continued…” HFC’s former Credit Director Kevin Isika said in the court documents. “An unsecured (loan) excess of Sh150 million was approved by Frank alone,” Isika said

This was the loan given to Munga’s Equatorial Nuts Processors, a 23-year-old firm that processes peanuts, macadamia and cashew nuts.

He further alleged that another mega loan given to Ireri’s brother-in-law through a company called Shade Systems has also never been repaid. Ireri is also accused of aggressively blocking attempts to recover another loan from a defaulting borrower called Amazing Tours and Travel.

Munga was also swallowed in a Ponzi scheme in a Sh71B scandal in which Mauritius seized Sh58M shares. Mauritius seized all the assets in the wake of the alleged Sh71 billion fraud and sold the 452.5 million shares in 2016 to a consortium led by businessman Peter Munga.

On with the Kenya Power poles tender winners, Thika Town MP Patrick Wainaina secured Sh40 million tender for the concrete poles through Jungle Energy (K) Ltd, which he owns with Ms Hellen Wambui Kimani. They share an address. The MP owns 90 per cent of the shares in the company, which according to records at the company registry, was registered in 2013.

Other big names on the list include Rai Cement Ltd, which has won Sh43 million tender to supply the poles. The Rai family has interests in sugar, cement, paper and farming, among others.

Timsales Limited which is associated with the Tai will supply wooden poles worth Sh112.87 million while its sister company Rai Cement will deliver concrete poles valued at Sh70.13 million.

Ironicaly and coincidentally in the wake of wooden poles, in 2006, environment CS Keriako Tobiko appointed Jaswant Singh Rai to sit on the board of the Kenya Forest Service. Singh Rai is the Proprietor of Raiply, bought Panpaper Mills LTD and is also one of the biggest illegal sugar importers. No way he will protect forest. Killer of forests in Kenya. And he now gets bigger chunk of the new deal.

The family has also spread its wings to Uganda, where it owns the second largest sugar mill – the Kanyara Sugar Works. It also owns Mufumbira Paper Mills in Tanzania.

Then there is CP Power East Africa Ltd, which won a tender worth Sh30.7 million. CP Power is owned by two companies Bluescope Group Ltd and Midan Investments Ltd. Bluescope Group is owned by Ms Salome Gatachew and Mr Dawit Wondwossen Bezuneh, who own 50 per cent stake each in the company. Midan Investments is owned by Ms Makeda Tsegaye Tadeese, an Ethiopian national and Mr Dawit Wondwossen Bezuneh, from the US. Meru Supreme Industries, owned by Mr Justus M Nguu, Mr Wilfred Mwiti Nguu and Mr Kelvin Mwenda Nguu, also walked away with a Sh28.7 million tender, while World Poles Ltd got Sh28.1 million tender.

Line Enterprises is owned by Ms Wangui Kimathi and Ms Susan Njeri Macharia while ABM Holdings Ltd is owned by Mr Ali Yislam Ali Bashamakh, Ms Manprit Kaur Manku, Mr Mohamed Islam Ali and Pall Mall Holdings Ltd, a firm owned by a maze of companies associated with the Amin Manji empire, that is known for its mini bakeries in Nairobi and Mombasa.

Revealed: How Sh2.2B Was Lost At The Nairobi Hospital Within A Year