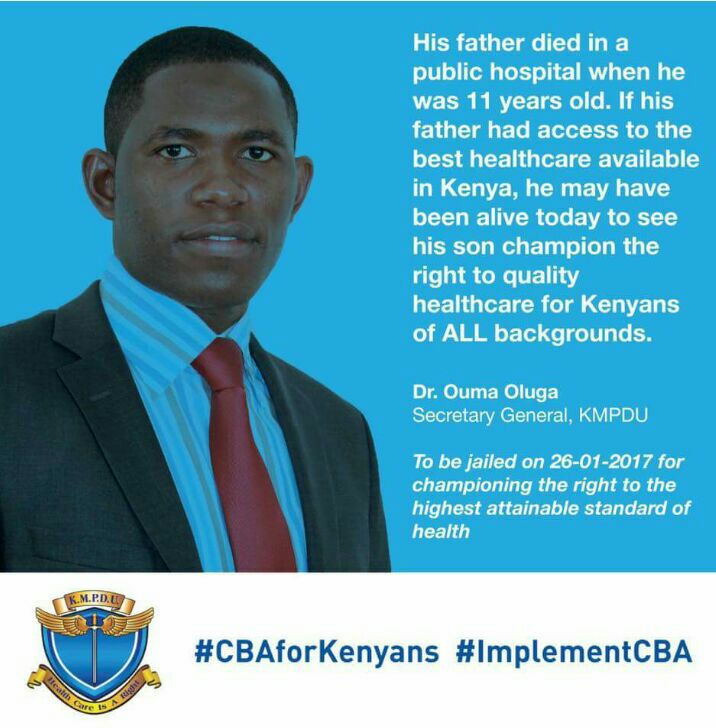 The Government has displayed open dishonesty in solving the health standoff that is on its 51st day running and instead opted for blackmail tactics through sustained propaganda in doctors painting them as selfish and unpatriotic. There has been a maintained script demonizing doctors throughout the strike period on various media platforms with Twitter taking the lead with paid pro-government ‘bloggers’ pushing government rhetoric on doctors say in.

Doctors, however, have shown extraordinary resilience and focus through this course that now leaves them at a stage of serving a month jail term over contempt of court that demanded them to call off the strike. It’s important to note at this point that this is a traditional arm-twisting move using the judiciary to intimidate and coerce officials heading industrial standards to submission. KMPDU officials are a rare breed that studied the game well before the coaches.

In their propaganda, the government has deliberately ignored the elements of CBA that were engineered to overhaul the pathetic state of public healthcare that has been on its deathbed for over 50 years. Instead, they’ve focused on the salary component which is just but a leaf from the pages. This is a psychological warfare to incite the public against doctors. Luckily enough and thanks to social media since mainstream is under anesthesia, doctors took to social media giving their personal experiences working in public hospitals, deplorable. CBA in entirety seeks to make the working environment the doctors better, and public get quality healthcare that has now become the reserve of private institutions.

Related Content:  How To Politely Turn Down Handshakes Without Offending

With Thursday deadline given by magistrate Lucy to call off the strike collapsing in few hours, KMPDU officials have resolved to serve the one-month jail term with a no deal smoke coming from failed talks with government staff members who’re unsurprisingly pointing fingers at the doctors union. The jailing of the officials is set to open a new layer of flame with things going from bad to horrible. Jailing the officials for a month would mean the strike not being called off for that period and no surety that it would end with their release at the end of the term.

The Government is charged with ensuring health security to its citizens and its a shame the country has moved 50+ days without doctors in hospitals and yet the President and his deputy shamelessly still have the audacity to put the sick society through massive voters drive and giving zero hoots on their health state. In fact, the President recently made it clear that voters registration is the top priority giving the doctors standoff a horse kick. Here you’re on your own as a voter who elevated them to power. When ruling class get sick with minor bruises they’ll fly abroad as for You; you’ll walk into an empty hospital and die.

Our priority now is to urge voters to register, making sure every citizen of this country has an opportunity to vote. pic.twitter.com/4K6nQ27r0X

With hours fast dropping, will the State go ahead with their plot to jail doctors as one of their best bargaining tools or rise above ego and dick measuring to put interest of the public that they’re mandated to serve and give a treasury go ahead to implement CBA and have a healthy nation or choke with a hot potato to death with public healthcare? Kenya watches Milimani Courts intrigues and outcome in a few hours.

Related Content:  Opinion: The Gender Balance Debate Let Nature Take Course
Kenya Insights allows guest blogging, if you want to be published on Kenya’s most authoritative and accurate blog, have an expose, news TIPS, story angles, human interest stories, drop us an email on [email protected] or via Telegram
Related Topics:
Up Next