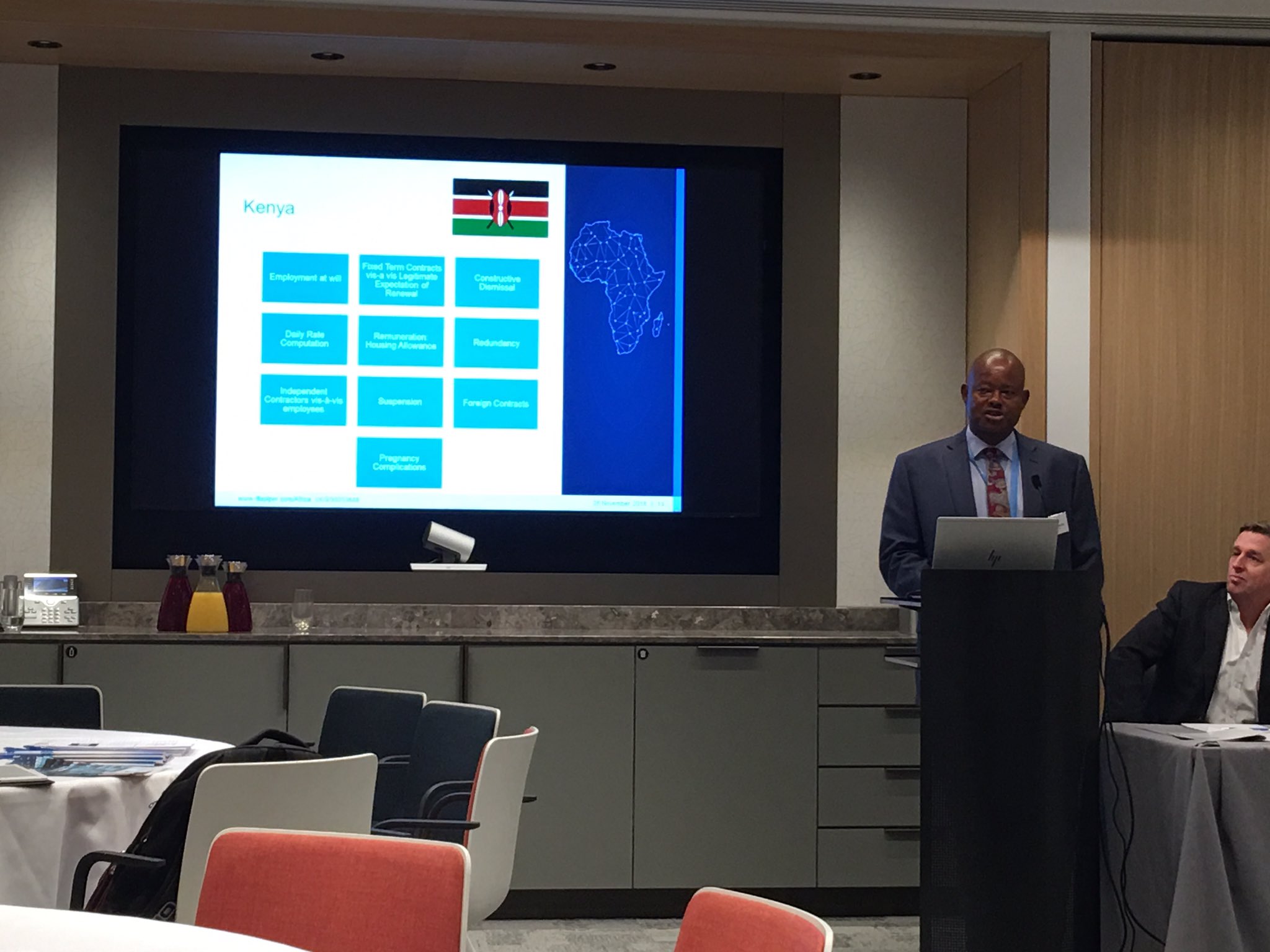 Kenyans are now accustomed to corruption cases that never seem to end, each and everyday the headlines are splashed with prints of billions lost. Billion has even lost its value in Kenyans faces who’ve been numbed by corruption.

A parliamentary investigation has concluded that the Sh63 billion leasing of medical equipment for counties was a “criminal enterprise” designed to enrich a few individuals but fell short of naming those responsible.

Senators recommended all public officers found culpable of illegalities in the Managed Equipment Service (MES) procurement, which they said was done “in the furtherance of the adverse commercial interests” at the expense of Kenyans be prosecuted and barred from holding public office.

The report by the Senate ad-hoc Committee said that, although the programme had a noble goal to help the public access quality healthcare, the persons involved “from start to finish implemented the project in a manner that violated the very constitution and the sacred principles it was originally conceived under.”

According to the report tabled in the House Tuesday, the project signed at State House Nairobi in 2015 had a pre-determined outcome as the suppliers of the multi-million equipment were well known by Ministry of Health officials even before tenders were advertised.

The Ministry of Health went on a buying spree despite a needs assessment confirming that counties lacked adequate capacity to absorb the equipment.

Some of the equipment was either overpriced, substandard, delivered late, or not delivered at all and the committee recommends that private firms as well as individuals found culpable of illegal acts in procurement should be barred from doing business with both levels of government.

“As a matter of fact, the committee has established that the MES project was a criminal enterprise shrouded in opaque procurement processes and that the Ministry of Health relied on a faulty tool to justify a pre-determined outcome in relation to the award of tenders that likely resulted to impudent use of public Finance Management Act that forbids wasteful expenditure,” reads the report.

“The MES project is the only project where conditional grants meant for county governments and appropriated under the County Allocation of Revenue Acts are unconstitutionally paid directly to the Ministry of Health instead of being deposited in the respective County Revenue Funds contrary to Article 207 of the Constitution,” the report further reads.

To amend this, the Committee recommends that money meant for the project should be deposited to the County Revenue Fund as required by the Constitution.

Behind the tendering lay a heap of controversies and consultants dragged into the mud.

IKM Advocates were brought in to provide legal advice on the optimal MES procurement approach (PPP vs. PPDA). IKM would then recommend a PPDA that would ultimately cost more than the original PPP.

The law firm headed by CS Paul Muite and managing partner Mr James Kamau told the parliamentary committee that MoH appointed their firm for the provision of legal transaction advisory services from a panel of prequalified law firms with the approval of the Office of the Attorney General and Department of Justice (OAG & DOJ). As per their testimony, their services were lawfully singlesourced under section 32 of the Public Procurement and Disposal Act, 2005 (now repealed) which was the applicable law at the time.

In retaliation, the committee observed in a Special Audit of the MoH Accounts for the FY 2015/2016, the Auditor General had raised queries regarding the unprocedural manner in which the MoH single advisory services from IKM Advocates under the MES Project. With regard to the direct procurement of IKM Advocates for MES legal transaction advisory services, the Committee observed that the MoH failed to satisfy the legal requirements set out in section 74 of the PPDA Act 2005 (now repealed) by failing to demonstrate that IKM Advocates were the only persons capable of providing legal transaction advisory services under the MES Project, and that there lacked reasonable alternatives.

The Committee observed that the direct procurement of IKM Advocates contravened section 74 (3) of the PPDA 2005 (now repealed), as the procurement of the MES equipment was not so urgent as to render competitive procurement methods for legal advisory services impractical.

IKM Advocates admitted to having had ‘informal’ engagements with the MoH in respect of the MES Project prior to the execution of their service level agreement or approval of the AG. According to IKM, these engagements were aimed at understanding the MES project and the services that they were required to provide.

According to IKM Advocates, their initial scope of work entailed the following; advising on the optimal procurement structure for the MES Project; drafting, negotiating, amending and finalizing the MES Contract including all related schedules; drafting, negotiating, amending and finalizing the intergovernmental agreement to be concluded between MoH and each County government, including all related schedules.

According to IKM Advocates, their role in the procurement processes in the MES Project was confined to drafting the template MES Contract whic h was attached to the tender documents. The firm submitted that the MoH conducted the entire tendering process, and that they were not in any way involved in the identification, evaluation or selection of the MES bidders. Further, IKM Advocates submitted that they had not had any contact with any of the successful bidders prior to the tenders being awarded.

According to IKM Advocates, the final commercial close MES contracts were signed d contracturing a signing ceremony at State House on 6th February 2015 with the approval of the Attorney General (OAG) & Department of Justice(OAJ). According to their testimony, they were not made aware of any objections raised by the OAG & DOJ in respect of the contracts.

IKM Advocates, received a total of KShs. 48,881,063.90 (excluding taxes) from the MoH. The cost was cumulative and included payment for services rendered to the MoH during their informal engagements.

However, on 23rd April, 2015, the OAG & DOJ granted approval for the extension of the mandate of IKM Advocates for additional scope services such as;

-providing guidance to the contractors on preparation of their technical schedules and collating and contractualization of the same upon receipt and approval by MoH;

-review of and negotiating further mark-ups and comments to the MES Contracts submitted by the contractors so as to arrive at Financial Close MES Contracts;

-review of contractor term sheets and financial solutions and negotiation on the same and finalization as part of the Financial Close MES Contracts;

IKM Advocates testified that their extended mandate was funded as a ‘donation’ by the five MES contractors on a pro-rata basis, as follows:

Unprocedural Engagement of IKM Advocates by the MoH

The committee observed that Contrary to the provisions of AGs’ circular dated 3rd May, 2010 (Ref.AG/1/2010) which required all client ministries to consult and seek a pproval of the AG before retaining the services of private advocates, the MoH irregularly engaged the services of IKM Advocates prior to the approval of the AG, or the execution of a service level agreement.

Services rendered by IKM Advocates during this ‘ informal’ engagement period were highly consequential and included a legal opinion that presumably informed the decision by the MoH to vary the legal framework of the entire project from a PPP to a procurement model; and, draft contracts that were attached to the MES tender documents. The MoH paid IKM Advocates KShs. 48,881,063.90 (excluding tax) being the cumulative cost for services rendered. Contrary to the law, according to submissions by IKM Advocates, the payment included the cost of services rendere d during its ‘informal’ engagement with the ‘MoH’.

The Committee observed that while IKM Advocates denied having had any relationship or contact with the successful bidders, by their own admission, GE and IKM Advocates had had a existing client advocate relationship from 2010 at the time of its engagement as legal transaction advisors to the MES Project. The Committee further observed that according to the testimony of IKM Advocates, at the time of their engagement, the MoH was aware that they were on GEs’ panel of lawyers. However, neither the firm, nor the MoH declared this conflict of interest to the OAG & DOJ.

A conflict of interest between the two entities was subsequently demonstrated by the fact that IKM Advocates sub sequently went on to draft Government Letters of Support for GE East Africa Services Ltd (and Philips Medical Systems Nederland B.V.) that were manifestly different from the other MES contractors.

IKM Advocates further exhibited bias in favour of GE by pursuing the issuance of an enforceability opinion from the OAG & DOJ in the exclusive interests of the GE contract.

Further to the above, the Committee finds that despite having participated in the preparation and drafting of the tender documents which exp ressly limited the eligibility of bidders to original equipment manufacturers, IKM Advocates omitted to advise the MoH that GE were not in fact original equipment manufacturers and that they therefore did not qualify to participate in the tender.

Based on the foregoing, the Committee came to the irresistible conclusion that, in fact, the very coming of IKM Advocates into the MES Project may have been solicited or otherwise influenced by GE.

The Committee observed that IKM Advocates acted unethically by accepting ‘donations’ amounting to USD 945,000.00 (KShs. 95,445,000 at KShs. 101 to the USD) from parties that they were supposed to be acting against i.e. the MES Contractors.

Further to this, the Committee observed that the aforementioned ‘donations’ collected by IKM Advocates from the five MES contractors was almost double the KShs. 48,881,063.90 it had received from the MoH on whose behalf it was supposed to have been acting.

The Committee noted that according to their own testimony, and as per their terms of reference, IKM Advocates played a role in “ … drafting, negotiating, amending and finalizing the intergovernmental agreement to be concluded between MoH and each County government, incl uding all related schedules”.

In the face of the findings of irregularities in the conduct of the IKM Advocates, the committee has made the following recommendations:

Governors Ceases Advertising With NMG Over Sustained Graft Stories, Warn Other Media Houses Of The Same If They Publish ‘Negative Stories’