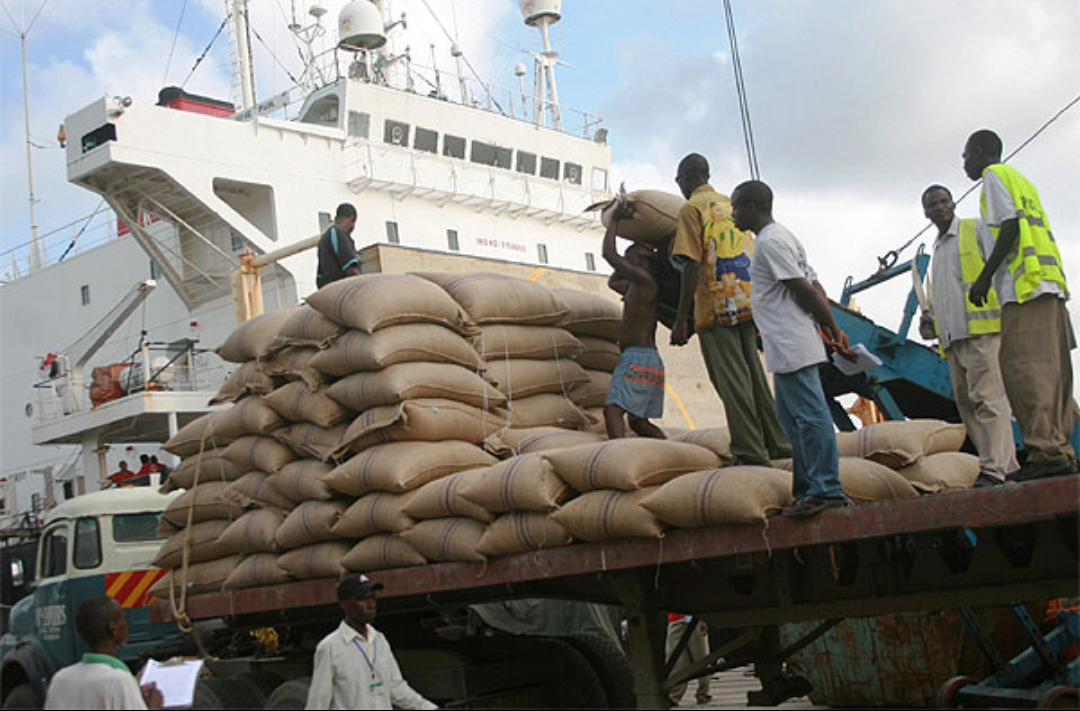 Casual workers loading a 22,000 ton track With Maize at a Mombasa port Photo|NMG

NCPB stock records indicate that they have bags to run for only one month in storage.

CS Kiunjuri said duty-free imports have been controversial in the past years.

The CS told a local press that he’s going to involve the entire cabinet in the vital decision in order to avoid political cartels that always make huge profits from such importations.

Initially, ministry of Agriculture used to apply for tax waivers from the Treasury. The ministry would later issue permits to specific traders and millers who later imports duty-free maize.

Maize is the staple food in many poor households and the anticipated shortage would lead to massive prices hikes of maize flour and products.

“I know time is running out, but I will leave that decision to be made by the Cabinet. I understand that landmines are being set for me and that is what I am avoiding,” CS Mwangi Kiunjuri in a media press.

The Government had said that they have 21 million bags, which from their estimations would sustain the country until mid June.

The NCPB is also set to release 3 million bags to Maize Miller’s. The bags are from governments Strategic Food Reserves.

In 2017, Treasury CS Henry Rotich and the then Agriculture CS Willy Bet were subjected to thorough scrutiny and grilling from the Senate for abuse of the importation process.

Related Content:  Blogger Robert Alai Says His Arrest And That Of Dennis Itumbi Is A War On Those Allied To DP Ruto

Gerald Musila, the Executive Director of Eastern African Grain Council, said that the maize will arrive more than 3 months later.

Musila emphasized that the process should have been authorized months ago because it takes over 3 months for maize to reach Kenya from any suitable country.

Kenya had previously imported controversial maize from Mexico that took over 4months to reach in the country.

Our agricultural statistics indicate that Kenya depends on maize imports from Malawi and Zambia.

However, Zambia has barred all maize importations and Malawi crop production was massively affected by Cyclone Kenneth and Cyclone .

Tegemeo Institute researcher Dr. Timothy Njagi, said the needs to be an accurate assessment of the amount of maize in the country.

In support of Dr. Njagi’s advice was Dr. Andrew Tuimur, the Chief Administrative Secretary at the Ministry of Agriculture.

Dr Tuimur said that the ministry want to avoid the repeat of mistakes that made in 2017.

In 2017, the government subsidy programme intended to import 6million backs but a backdoor deal between the ministry and Millers saw 10million bags being imported in.

KNBS also reported that the maize shortage is going to cause a price upsurge on nonalcoholic and alcoholic drinks as from mid June.

Kenya Insights allows guest blogging, if you want to be published on Kenya’s most authoritative and accurate blog, have an expose, news, story angles, human interest stories, drop us an email on tips.kenyainsights@gmail.com or via Telegram
Related Topics:KNBSMaizeMexicoMwangi KiunjuriNCPDSenate
Up Next