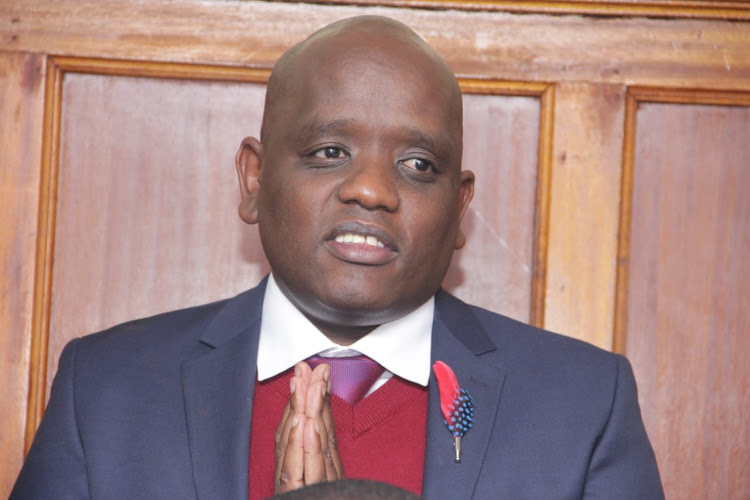 Dennis Itumbi when he appeared in court on Thursday.

In a replying affidavit to the application by DCI to have the court hold him for 14 more days as they conduct investigations, Itumbi has made a flaming comeback saying he has more damaging information to ascertain the assassination claims and information which puts his life in danger.

Itumbi who pleaded with the court to release him on condition that he surrenders his phone for forensic auditing and that the said WhatsApp group under investigations he’ll keep off, Said he gathered credible evidence to prove assassination plot and was not going to reveal his sources as wanted by the detectives.

Basing his argument on journalistic ethics, Itumbi has refused to disclose his sources but in the files affidavit he tells the court that he fully informed the detectives during interrogations that he has a videotape and audio to affirm the allegations of series of meeting at La Mada where it’s alleged that a group of cabinet secretaries had discussed the plot of killing the deputy president.

Confidently, Itumbi told the court that he was ready and willing to avail the video to the court, “I request to play the audio-video in court. In camera” Read part of the affidavit.

Itumbi pleaded with the court not to allow him to be confined at Kamukunji Police Station where the DCI has requested saying he feared for his life. He said the station holds hardcore criminals some of whom he has dealt with at his position in the Statehouse who could cause harm to him. He mentions Brian Bera the intruder who was shot at Statehouse as a possible person who could cause harm to him. Brian has since been released from jail.

“I fear for my life because the DCI and the PS are very desperate to have my help in saying there’s no plot for assassination and or that it’s based on an empty letter.” Itumbi said in his affidavit.