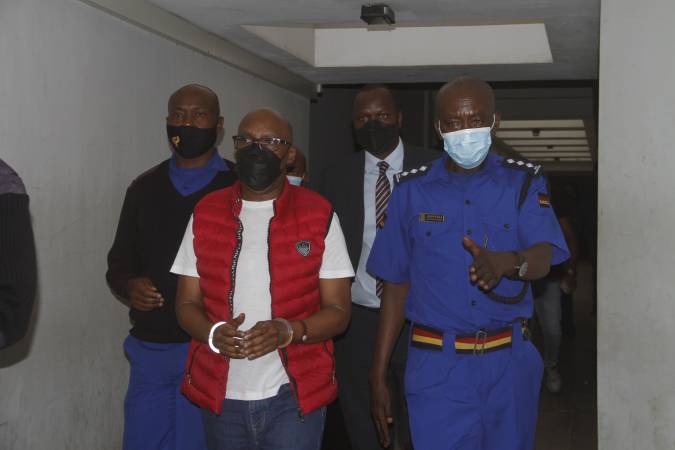 Businessman Jimmy Wanjigi being escorted from Milimani Law courts basement cells to the courtroom after he was arrested by heavily armed police officers from Directorate of Criminal Investigations.

The Directorate of Investigations (DCI) has given Presidential aspirant Jimmi Wanjigi 72 hours to surrender 11 firearms and 485 ammunitions that are his possession illegally.

In a letter, the DCI says Wanjigi doesn’t have a firearm license and will be arrested if he fails to heed the directive.

“The Directorate has conducted extensive investigations and established that you are in possession of firearms and ammunitions that are deemed to be illegally held,” the DCI says.

This even as the DCI revealed that Wanjigi ignored summons to appear before the Firearms Licensing Board last year following a directive by CS Interior Fred Matiang’i for a mandatory vetting of civilian firearm holders.

DCI also accuses him of congregating highly trained persons in the use of firearms for ulterior motives.

“In January 2022, while DCI officers were conducting investigations into a land matter in which you are a person of interest, they encountered an illegally armed person within the compound of Kwacha group of companies where you were holed up. The said person disclosed that you had armed him as your bodyguard.

It was later established that the person is an Ex-GSU officer attached to the elite Recce squad,” the letter reads.

The DCI also claims that the whereabouts of the firearms and the ammunitions are unknown, warning that they could be in the hands of criminal gangs.

“The illegal holding of firearms and such massive amount of ammunition particularly at a time of heightened political activity could be used to commit a myriad of offences,” The directorate says.

Among the firearms Wanjigi is expected to surrender is a Ceska, a shot gun, a rifle, 4 glock pistols among others.

Related Content:  Health Cartels: Local Agents Paid Sh500,000 For Every Patient Referred To India
Kenya Insights allows guest blogging, if you want to be published on Kenya’s most authoritative and accurate blog, have an expose, news TIPS, story angles, human interest stories, drop us an email on [email protected] or via Telegram
Related Topics:
Up Next