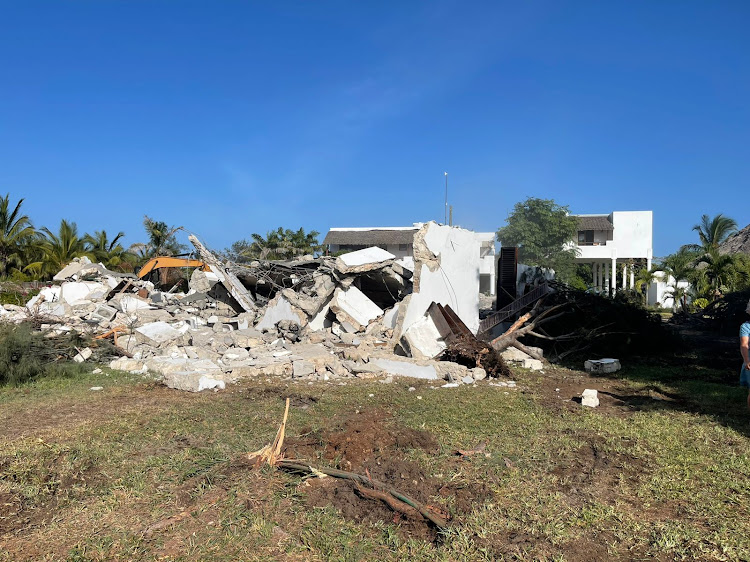 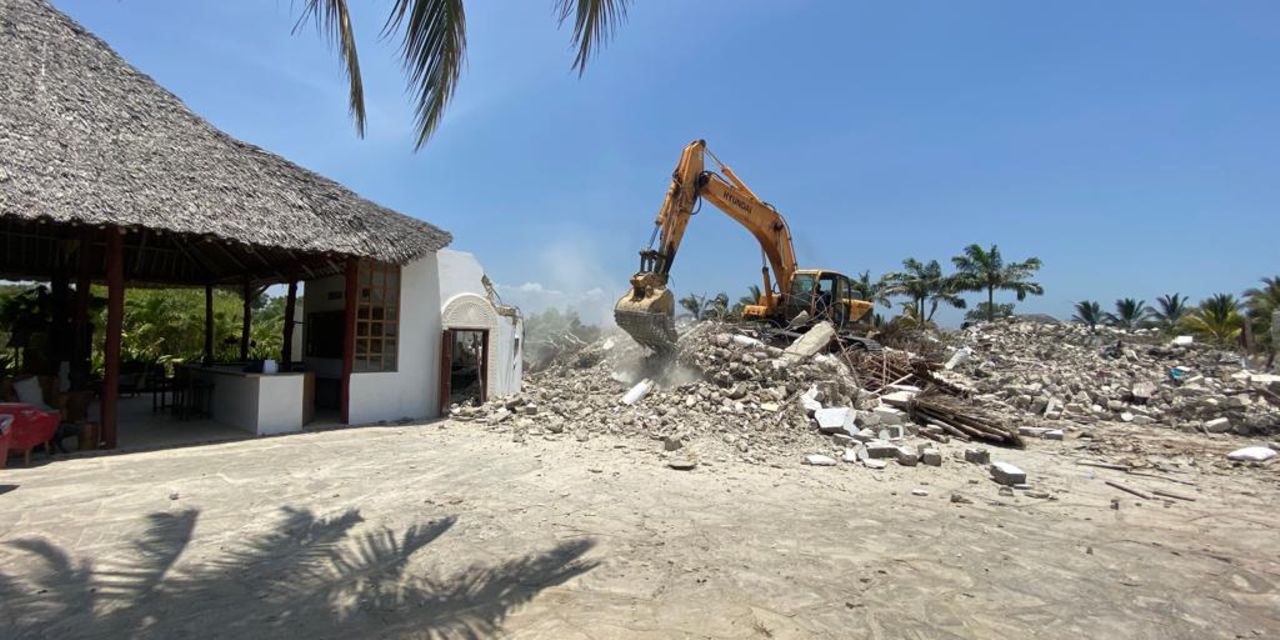 An excavator pulls down part of Sonrisa Villas in Galu Beach, Kwale County, on February 18, 2022.

The dispute is the ownership of 1.9-hectare piece of land on which Hotel Sonrisa, which was demolished on Friday at around 2pm, stood.

SK Macharia, claims ownership of the land saying it is part of his land under title deed number Galu/Kinondo/50, which he says he bought in 1981.

On January 24, Macharia and Five Eleven Traders and Auctioneers obtained orders from Judge N. Nabibya in Mombasa to evict Ali Khan Ali Muses and Estate Sonrisa Ltd from the land.

However, the order came hours after part of the Hotel Sonrisa’s perimeter wall had been demolished in the wee hours of the night on January 23.

This prompted Strezelecka, through lawyer Oluoch-Wambi, to obtain injunction orders stopping Macharia from interfering with the property.

She successfully obtained the order from Justice L. Naikuni in Mombasa on January 26 pending hearing and determination of the application ex parte.

However, the auctioneers on Wednesday obtained eviction orders from Naikuni. Naikuni said the matter will be mentioned on March 3.

Oluoch-Wambi protested the order saying the judge cannot issue an order against his order without setting aside the previous stay order.

Strezelecka is said to have collapsed about 40 minutes after the start of the demolition exercise.

She is said to be in a state of shock and cannot speak. Iwona Strzelecka, the proprietor of Sonrisa Villas admitted to Palm Beach Hospital in Diani after the Friday incident.

The Polish investor came to Kenya in 2007 when she bought shares from Estate Sonrisa Limited, which owns plot number Kwale/Galu Kinondo/48, in Diani.

According to court documents, Sonrisa says they have been in possession of the entire property measuring 1.9 ha since 1991.

In 2007, after buying the shares, Strezelecka embarked on construction of Hotel Sonrisa, which has 11 guest rooms, staff quarters, a bar, a restaurant, among other amenities, on the land.

“I came as a foreign investor and got a certificate. I came here to start a new life,” Strezelecka earlier told the press in an angry rant.

The hotel started operations in 2013.

However, in 2014, Macharia filed a case at the Land Court in Mombasa claiming ownership of the property against Ali and Estate Sonrisa.

In the same case, he also claimed that Sonrisa had encroached on his property by 1ha, based on the acreage on Sonrisa’s title that indicated 0.9 ha instead of 1.9 as it was on the ground and all relevant documents and maps at both the Lands registry and Survey of Kenya.

The legal tussle revolving around the error in Sonrisa’s title deed which indicated the land size was 0.9ha instead of the 1.9ha as indicated in the maps and other documents, was to be determined on February 16.

The Land Court in Kwale, where Sonrisa filed a suit over the land size, issued temporary orders of injunction restraining the Registrar, Regional surveyor and Macharia from dealing adversely with the Sonrisa’s property pending the determination.

However, on January 23, around 2.30am, she and her guests in the hotel were woken up by the sounds of two excavators pulling down the perimeter wall.

“The two machines were heading towards one of the hotel buildings. With the assistance of my staff and the guests, we managed to stop the excavators,” Strezelecka said.

The two excavator drivers had no documents to support their actions and were arrested when police came but were released on a cash bail.

“We are still waiting for the criminal case to start. It has failed to start twice, with each time being postponed because of a missing file,” the Polish investor said.

Speaking from her hospital bed the investor, Ms Iwona Strzelecka, whose two villas and main building, with seven guest rooms, were demolished, said the auctioneers demolished the wrong premises saying she wasn’t served with court orders.

“There are only three villas remaining. We have lost approximately Sh200 million, forcing us to evacuate our guests most of them foreigners” said the Polish national, who is married to veteran Kenyan rally driver Azar Anwar.

Following the incidences, the polish embassy in Nairobi wrote to the Director of Criminal Investigation regarding Ms Iwona Strzelecka property tussle with SK Macharia ,expressing concern on the inhumane manner their citizen was being handled.

“Allow me to emphasize that our citizen is currently living in fear after the incident. Since all the guests checked out of the hotel soon after the incident, she is also suffering considerable financial losses. Therefore, it is vital to fast track the case.” Reads part of the letter dated 2nd February seen by Kenya Insights.

The intervention by the embassy however seems to have fallen on deaf years as the demolition of the hotel eventually occurred.

Recovering from the pandemic, polish tourists were praised by Kenyan Tourism Authority as having given a boost to the tourism industry that was ailing. Kenya has been receiving a good number of tourists and investors from Poland.

Kenya Insights allows guest blogging, if you want to be published on Kenya’s most authoritative and accurate blog, have an expose, news TIPS, story angles, human interest stories, drop us an email on [email protected] or via Telegram
Related Topics:Estate Sonrisa LimitedMs Iwona StrzeleckaSK Macharia
Up Next