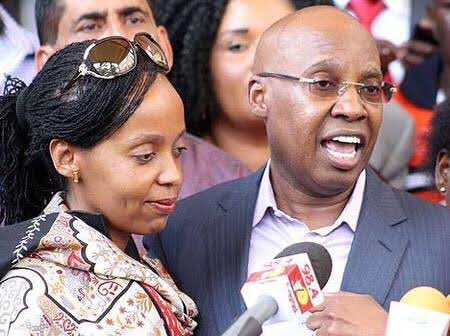 Businessman Jimi Wanjigi has dismissed claims that his arrest has anything to do with a parcel of land in Westlands where one of his houses sits on.

According to Wanjigi, his wife Irene Nzisa Wanjigi and himself are the undisputed owners of the Westlands-based Ksh.1.2 billion parcel of land having previously moved to court to alert authorities about scammers intending to swindle them out of the property.

“We went in 2018 to complain that there are fraudsters who are taking it away and now suddenly we are the culprits,” he said.

Wanjigi was arrested on Tuesday afternoon after police camped at his office off General Mathenge road in Parklands for 20 hours.

Speaking at Kamukunji Police Station where he was taken after the arrest on Tuesday, Wanjigi questioned the timing of his arrest.

Wanjigi alluded to the fact that the arrest is politically motivated.

Wanjigi continued on to say that he had planned to meet members of the ODM party allied to him on Sunday to deliberate on a party president prior to the Independent Electoral and Boundaries Commission’s (IEBC) February deadline.

“This weekend we were going to launch a special delegates congress where we had called about 2, 000 people, delegates of ODM, to elect the president of the party within 21 days. That was to happen this coming weekend on Sunday,” he said.

In addition, Wanjigi also hinted that his arrest could have been made as retaliation following his public firearms dispute with DCI boss George Kinoti, that culminated in an arrest warrant being issued for the latter for failing to adhere to orders by the court,

Wanjigi underscored that he was only apprehended in an attempt to derail his 2022 presidential bid.

Wanjigi has declared interest in the presidency using the ODM ticket.

A Nairobi court issued a warrant of arrest against him over an alleged conspiracy to commit a felony and forgery of a title deed.

The warrant was also issued against Wanjigi’s seven other alleged co-conspirators among them his wife Irene Nzisa Wanjigu.

They are accused that on diverse dates between 9th April 2010 and 5th June 2018, jointly with others not before the court, conspired together to commit a felony namely forgery of a title deed registered under the name of Horizon hills limited.

Earlier in the day, two courts issued contradicting orders over the arrest of Wanjigi.

One of the courts issued an order for his arrest while another stopped the arrest pending the hearing of a petition that had been filed.