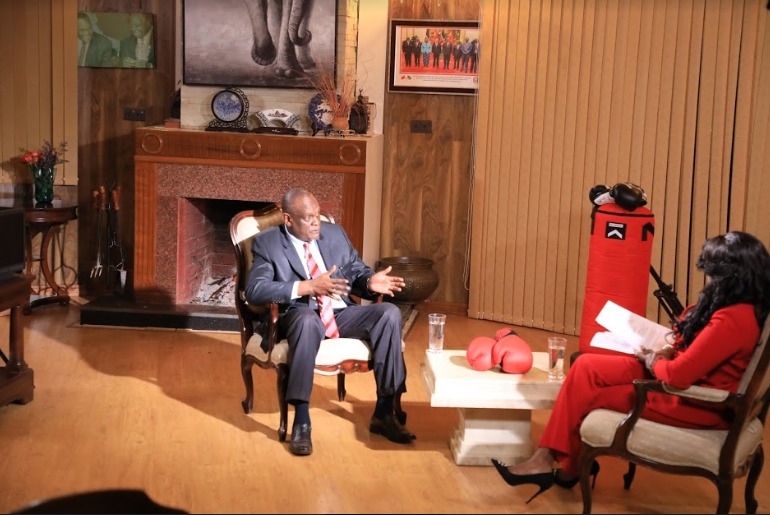 In January this year, Murathe resigned from his post as Jubilee Party’s interim vice-chairman, citing the conflict of interest in his bid to block Ruto’s 2022 presidential bid. The two have been trading punches ever since.

Murathe who formed the ‘Stop Ruto’ movement has on several occasions vowed to do everything possible to ensure the DP doesn’t go for the presidency. At one point he called upon Ruto to retire together with Uhuru when his term expires in 2022.

In another instance, Murathe warned that he would be moving to Supreme Court to bar Ruto from contesting. For long, it has been assumed that Uhuru would be supporting Ruto for presidency in 2022 in an assumed Memorandum of Understanding.

While appearing on Punchline on K24 hosted by Anne Kiguta, the Mt. Kenya political heavyweight sent jabs that left many shocked. Murathe refuted claims of an MOU between the two jubilee principals saying there was none.

He claimed that there was no such pact terming it as only political pronouncements that were only relevant then and now under review.

“You have clearly heard the president on many occasions making pronouncements that tells you what is on his mind.  For instance, in Nyeri late last year, he said that his pick for president in 2022 will shock you, and last week, you heard him say that he doesn’t care who will be president. This are clear indications that he did not have any MoU with anybody,” he said in an interview with Anne Kiguta.

He went further to tell the DP to produce any document if any that would prove that Uhuru had signed to support him in 2022. However, he said even if the president would go ahead and endorse Ruto, the Mt. Kenya region’s vote would not be automatic to him. “The president has only one vote. Even if he promises to support Ruto, that does not mean Mt Kenya region will vote for Ruto,” he said.

In a scathing attack, Murathe questioned what Ruto would do in 2022 that he has not done for Kenyans since 2013. He accused the DP of influencing the tender to Sinohydro Tianjin Engineering Limited that was the higher bidder by Sh3 billion instead of China Gezhouba Group, the lowest bidder.

Fresh on the assassination claims by the DP, Murathe said on Punchline that it was mere diversion attempt on the war against corruption. He went ahead and dared Ruto to resign if he indeed feels that there are people in the government who’re plotting to kill him and that his life is in danger.

“On principle, if I feel that I have members of the Cabinet who I feel are a threat to my life and they are not going to resign, then I should take a walk,” said Murathe.