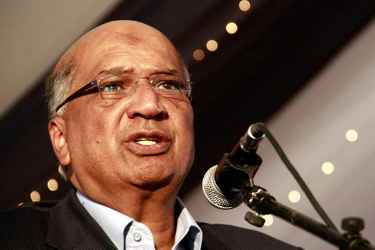 Tycoon Naushad Merali is known for good and worst reasons at the same time in equal measure. As a business mogul and in equal measure a corrupt mogul who not once or twice have been brought to limelight for bribery accusations and deals gone sour to win state tenders.

Merali whom has had close ties with almost all administrations since Kenyatta era, was at some point targeted by a famous group of seven individuals in what turned out to be an historic broad daylight scamming.

On January 14, recieved a call from the ‘President’ about a tender, the tycoon had no reason to doubt he caller was not the head of state. The caller perfectly mimicked his voice. Merali and the ‘President’ exchanged pleasantries on the phone, then got down to business.

The ‘President informed Merali of a state tender he wanted the well-known businessman to enjoy. But there was a catch. The ‘head of state’ asked Merali for a small favour before he could embark on the lucrative contract, Sh10 million in advance for facilitation.

That presumably was a trifle compared to the tender itself. It happened that Merali was outside the country but that wasn’t gonna stop the show given his appetite, he took the risk and tadked his financial officer to process the facilitation fee which at this point we will call it as it is, a bribe.

So elaborate was the plan that the ‘President’ sent his men to pickup the cash from Merali’s office in Mombasa road. Sharply dressed men arrived with full Police escort and high range cars to clear any touch of doubt. They were given the Sh.10M. The suspects didn’t target Merali randomly and using uhuru’s voice randomly, this was elaborate, they must have had an insider information in order to be able to exploit the weak links.

Sh10M is not a few coins that Merali would just give easily without solid assurance like the president himself collecting the money. The level of confidence Merali had on the ‘President’ could easily point at a possible previous and similar engagement.

At some point in 2019, Merali again was accused of giving a bribe of USD 5000 (Ksh. 500000) to fake Kenya Defence Forces (KDF) soldiers at Serena Hotel. https://www.cnyakundi.com/sameer-africa-group-chairman-naushad-merali-in-new-bribery-drama/

The bribe was meant to give him an edge on a tyre deal worth Ksh. 1.05 billion at the Ministry of Defence. The fake KDF soldiers had demanded Ksh 105 million.

Perhaps a routine activity at the Ministry of Defense – KDF. At some point one of the world’s top tyre companies, Goodyear, was fined Sh1.5 billion by a United States court for offering bribes to Kenyan military personnel and civil servants just days after two Britons were sentenced in London for a similar crime.

The Goodyear Tire and Rubber Company were accused of giving bribes amounting to Sh135 million (US$1.5 million) to top military, civil service and parastatal chiefs during the tenure of Narc and the coalition government formed after the 2007/8 post-election violence.

The United States’ Securities and Exchange Commission found Goodyear paid bribes to Kenyan and Angolan officials to land tyre sales in the two countries. The firm was accused of violating the Foreign Corrupt Practices Act. Among those bribed include officials of the Kenya Air Force, the ministries of defence and roads, the Kenya Ports Authority and Telkom Kenya.

Others listed are officials of the Armed Forces Canteen Organisation (AFCO), the Nzoia Sugar Company and the East African Portland Cement Company.

The bribes to entice these organisations to buy Goodyear tyres took place between 2007 and 2011.

At the time, the Kenya Defence Forces was headed by Gen Jeremiah Kianga, while Garissa county Senator Yusuf Haji was the Defence minister. The Air Force was under the command of Maj Gen Harold Tangai. Engineer Michael Kamau, now the Cabinet secretary for Roads and Infrastructure, was the Permanent secretary for the ministry of Roads.

According to the ruling released on by the Securities and Exchange Commission, Goodyear used its local franchise, Treadsetters, to give the bribes.

“From 2007 through 2011, Treadsetters management regularly authorised and paid bribes to employees of government-owned or affiliated entities and private companies to obtain business”, the SEC ruled.

The SEC said that the bribes were generally paid in cash and falsely recorded on Treadsetters’ books as expenses for promotional products.

“The practice was routine and appears to have been in place prior to Goodyear’s acquisition of Treadsetters”, the decision by the SEC adds.

The Ministry of Defence listed H.Young East Africa, a firm associated with Mr Merali and a consortium of three local companies – Zutari Kenya, Blink Studio and NorthWind Consulting- led by Centum Real Estate to battle for the projects to be spread across several KDF barracks.

The project is to be funded through Public Private Partnership (PPP) model with the KDF providing Sh1 billion for the first phase as the military targets to ease an accommodation shortfall especially for the non-commissioned officer cadre.
The private investors will rent out the houses to KDF for 15 years, allowing them to recoup their capital running into billions of shillings over the period after which the lease will terminate and revert ownership to the millitary.

The military has targeted 2,340 residential units in phase one of the project with the Nanyuki base taking the biggest chunk at 737 houses on 300 acres of land, followed by 610 units at the Kenyatta Barrack in Gilgil.

Tycoon Merali owns a stake in H.Young East Africa in addition to other businesses that include majority ownership in Sameer Africa that has interests in financial services, property and agriculture sectors. Sameer Group is a vehicle tyre manufacturing company listed at the Nairobi Stock Exchange.