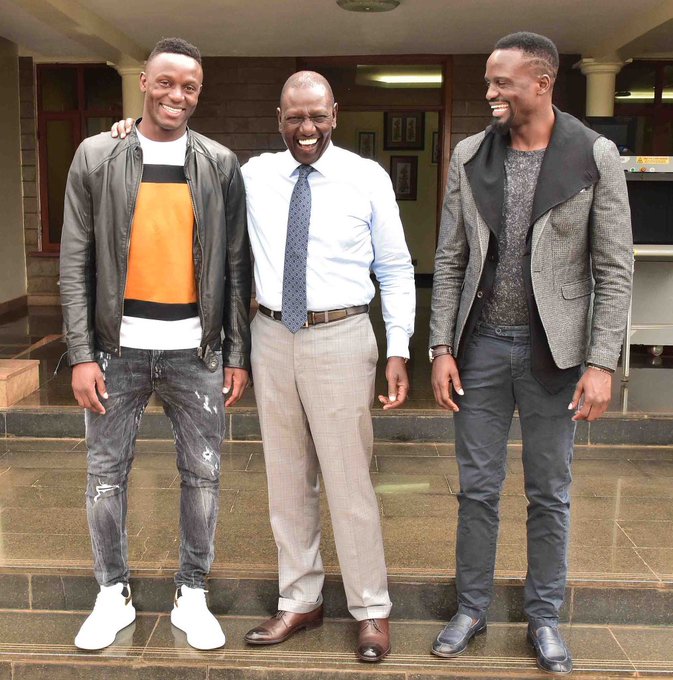 Jubilee Party thought fielding footballer McDonald Mariga was a genius move but to their surprise, it is turning out to not only be absurd but also divisive.  Mariga’s choice is facing criticism among the party’s rank and file with the latest prickle coming from Cherangany MP Joshua Kutuny.

Joshua Kutuny Speaking at Parliament buildings said that he expected the party to subject all the 16 candidates through a vigorous democratic process before settling on the best candidate terming the mode used to pick the football star on Monday by the party’s National Elections Board (NEB) as a democracy underminer.

“Politics doesn’t know a household name, we need to go back to the drawing table and put our house in order,” he said.

The MP now becomes the third Jubilee lawmaker to oppose the selection of Mr. Mariga to fly Jubilee’s flag in the November 7 by-election. Others that have opposed the election board choice are nominated MP Maina Kamanda and Mr. Moses Kuria (Gatundu South). The two Jubilee lawmakers on Monday said they would back ODM leader Raila Odinga’s candidate in the Kibra by-election.

Mr. Morris Peter Kinyanjui one of the aspirants has also been opposed nomination of Mariga by the Jubilee NEB. Kinyanjui said he has appealed the decision of the board saying it was done in secrecy and contrary to party rules. In his petition to secretary-general Raphael Tuju, Mr. Kinyanjui accused the NEB of usurping powers it does not have to conduct the aforesaid selection.

Mr. Kinyanjui, who was among the 16 aspirants interviewed, said Mr. Mariga’s selection was “not only unfair, deceptive and shrouded in secrecy, but also contrary to the provisions of Jubilee Party’s constitution.”

The election board on Monday settled on Mariga saying he demonstrated passion, zeal, and energy to serve the people of Kibra. NEB chairman Andrew Musangi, while defending its choice, said Mr Mariga has an endearing relationship with the people of Kibra since he was born and bred in the area.

IEBC on their side said they will only address complaints in Kibra party nominations after they are formally lodged. The electoral commission further noted that disputes relating to or arising from the nominations:

“shall be determined within 10 days of the lodging of the dispute with the commission.”

As if this is not an issue, other aspirants also want Jubilee Party to recall and halt gazetting of Mariga’s nomination terming it as fraudulent. Speaking at Miami Global Hotel in Nairobi, the aspirants expressed their disappointment, calling the nomination unconstitutional and a charade.

Mr Kinyanjui said the nomination procedure should have followed due process, which is either nomination by consensus, secret ballot or any other democratic method agreed upon by members. Kinyanjui said this in the company of other aspirants, including Ibrahim Said, Jack Owino, Ramadhan Daniel Orongo, Hussein, Frank Amollo, Geoffrey Mwangi and Elly Omondi.

Geoffrey Mwangi said they would not accept a nomination to be forced upon them without due process. The aspirants said they will unanimously submit their grievances to the Party Dispute Tribunal.

I’m of an opinion that this is yet another move to show the public that DP Ruto is forcing things his way and the Jubilee Party boardroom descion markers have run out of action. It is either Ruto in and his people out or his people in and Ruto out. Nobody in Jubilee clearly knows how to outsmart Ruto. If he’s a pain in the nuts right now, what if they allow him to take the Commander In Chief sword?

Related Content:  Now That The Jubilee Party Merger Celebrations Are Over, Reality Checks In
Kenya Insights allows guest blogging, if you want to be published on Kenya’s most authoritative and accurate blog, have an expose, news TIPS, story angles, human interest stories, drop us an email on [email protected] or via Telegram
Related Topics:IEBCJubileeKibraMarigaNEB
Up Next

For Joseph Kabila There’s A Life After Power