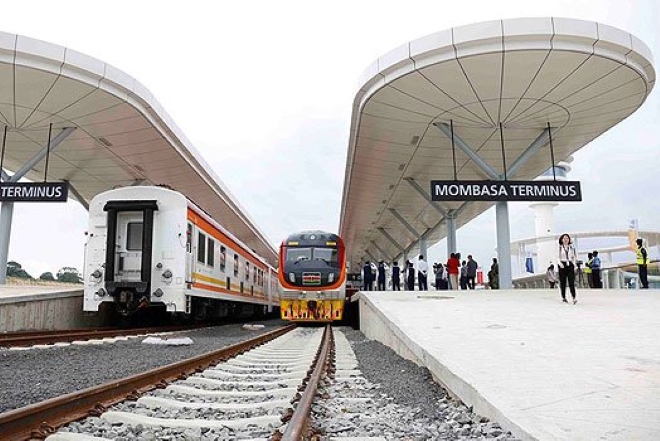 Four Nairobi based businessmen have lost their bid to stop the ongoing construction  of an inland container depot for the Standard Gauge Railway (SGR) in Syokimau, Nairobi.

John Muswanyi, John Mugo Njeru, Byron Kanyu, and Victor Muiru sought a court injunction to stop the building of the SGR depot claiming that they own the 15-acre land where the dry port is being developed.

The four claimed that the land was part of a 37-acre land allocated to them in July 1998 whose title they processed and registered under their names on February 4, 2005.

They told court in April 2020 that a company known as Syokimau ICD Limited trespassed on the suit property as it claimed ownership of part of the same plot and purporting to be from the Kenya Railways Corporation (KRC).

They also told the court that the company had begun erecting permanent structures on the disputed land that only an injunction in their favor would solve the issue before they suffered losses which may not be compensated.

However, Justice Erick Obaga dismissed their application after he established that the developing company was already in possession of the plot based on a lease from the Kenya Railways Corporation.

Evidence adduced in court revealed that the land was surveyed in 1969 and in 1971 when it became a subject of compulsory acquisition by the state.

“The question which will have to be interrogated later on is whether the land which had been subject of compulsory acquisition in 1971 could again be available for fresh allocation in 1998. This is more so because the Applicants did not place before the court any materials to show that there was a surrender of the acquired property as to be available for fresh allocation,” said the judge.

Justice Obaga ruled that the four businessmen did not support their case with probability of success since it was still unclear how a property compulsorily acquired by government would later allocated to civilians ten years on.

But the judge added that the portion of the disputed plot is capable of valuation and they can be compensated if they demonstrate their case well with evidence.

“Alternatively, the constructed portion can be demolished and restored to its original status. The Respondent has built a large area with cabros which can be used as a dry land port. Even on a balance of convenience, the balance tilts in favour of the Respondent which is already in possession based on a lease from Kenya Railways Corporation,” Justice Obaga added.

But the accused, Syokimau ICD Limited, said it has a lease of 15 years with effect from November 29, 2018 in the entire 15 acres piece of the land which has not been surveyed.

The company added that after the signing of the lease, it moved in to begin the process of constructing a multimillion inland container depot that will be used by the new SGR.

Kenya Insights allows guest blogging, if you want to be published on Kenya’s most authoritative and accurate blog, have an expose, news, story angles, human interest stories, drop us an email on tips.kenyainsights@gmail.com or via Telegram
Related Topics:KRC land disputesSGRSyokimau SGR Depot
Up Next