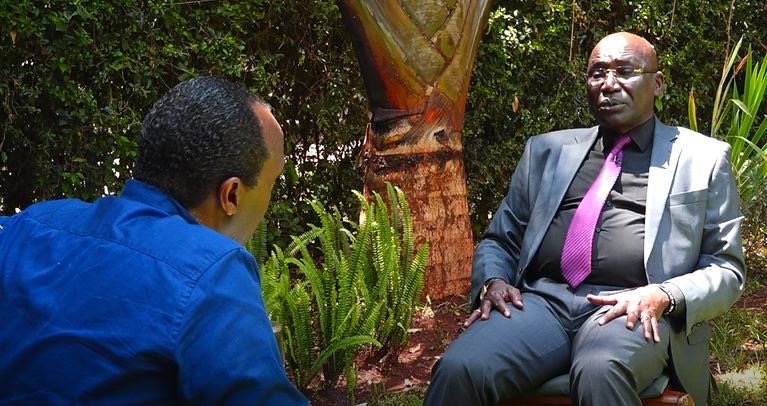 Accusations are now flying that the former  South Sudanese army chief of staff Paul Malong could have bribed his way to the screens for a ‘rebuttal’ interview following an expose done by Africa Uncensored exposing his role in looting and causing destruction and blood bath in his country.

Malong strongly denied allegations of embezzlement of public funds or committing atrocities against civilians during the five-year civil war in the country.

A recent documentary released by The Sentry and echoed by Africa Uncensored ‘The Profiteers’ once again reiterated accusations against Malong who is under UN and US sanctions about his wealth and his involvement in the war crimes during the conflict.

In a 25 minute interview with the Kenya Citizen TVreleased on Sunday, Malong further said he didn’t take advantage from his position as Governor of Northern Bahr El-Ghazal or profited from his position when he was the chief of staff.

“They did not tell us where I got the money,” he said. He further said the documentary and those who accused him have to prove that he has stolen money, give the details of these accounts and the country where these funds are deposited

“I’m not a rich man I’m just taking care of myself and my family. I have nothing,” he said.

“Northern Bahr El-Ghazal is not an oil producing state and everybody knows that,” so why the accuse me, he wondered.

Regarding the time when he was the army chief of staff, he said the minister of defence is the one who plans the army budget while the chief of staff is the implementer.

The same for the war crimes and atrocities, Malong said he executed the orders he received from his military hierarchy the army commander in chief President Salva Kiir.

“I was not operating independently,” he repeated.

Also, he dismissed any responsibility for the killing of civilians in Juba following the clashes at the South Sudanese presidency in July 2016.

“During the J1 fight, I was in control of the army more than any time,” he said stressing that the clashes ended at Jebel Kogor.

When asked about the rape of women in Juba, he said it was done by security soldier but not his army.

“I know what happened. It was in one of the hotels and one of the ladies said that the person who had raped her is an agent of security soldier and his name was written,” he said. 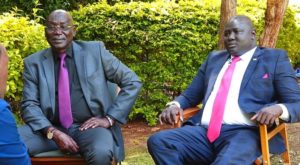 On the UN sanction, Malong said “they are missing the point. If they speak about the cause of the war, the cause of war is Salva and Machar. Whatever I did in the army was just orders,” he said again.

The old friend of the South Sudanese president avoided criticising Salva Kiir for his sack from the position of the army chief of staff.

However, Malong said that he was disappointed when Kiir accused him of asking Kenyan, Ugandan presidents and even Ethiopian prime minister to support him to overthrow Salva Kiir.

The South Sudanese tycoon Lawrence Lual Malong Yor Jr. took part in the interview to explain that General Malong was not his father and he is not his relative.

He and General Malong said they would pursue those who continue to repeat such claims in order to prove the corruption of the former South Sudanese official.

It is ironical that General Malong ‘accepted’ for an interview with Jeff to clear his name yet he refused to give John Namu audience during the compilation of documentary to comment on the accusations.

Documentary ‘The Profiteers’ was set to air on KTN but it was cancelled on the last minute in what is speculated to have been as a result of orders given to the station to edit out Malong’s name who was adversely mentioned in the three parts documentary.

It only went to show how well connected and powerful Malong is.

New information emerging is the general could’ve bribed his way to the tv after parting with Sh.600,000 or above. According Steve Juma, a journalist, he was approached by unnamed diplomat who offered sh600K for an interview with the accused general.

Steve says he declined the offer but wasn’t surprised to watch the request materialize when Malong was hosted on Citizen TV. 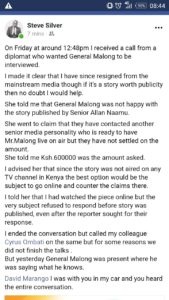 The controversial interview has been labeled a cleansing attempt and has brought Jeff Koinange under harsh criticism.

Jesus. What's Jeff Koinange doing? Is this what Kenyan TV has turned into? What nonsense is this?

Jeff Koinange Laundry Services – "Got Dirt? We Got Clean!" pic.twitter.com/CnF84FHHVd

Is it journalism if there is no right of reply?
Is it investigative if subjects were not directly interviewed?

Jeff Koinange making me question things. And I suppose that is the intent.

But he really is biased in presenting the other side of the coin. Clearly propaganda.

Related Content:  Eliud Kipchoge Throws His Shot At Barack Obama After He Congratulated Him
Kenya Insights allows guest blogging, if you want to be published on Kenya’s most authoritative and accurate blog, have an expose, news TIPS, story angles, human interest stories, drop us an email on tips.kenyainsights@gmail.com or via Telegram
Related Topics:
Up Next