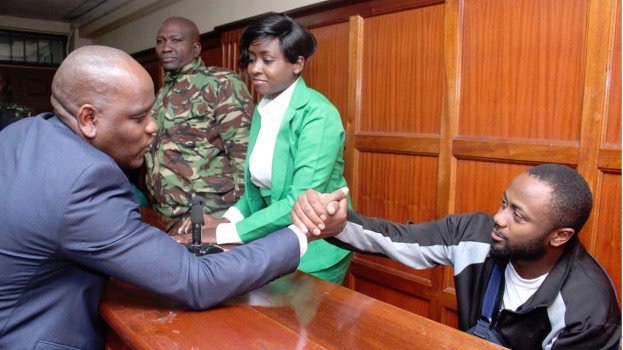 If there’s anyone who has stood at least publicly with Jacque Maribe since she got arrested and charged for the murder of Monica, that person is Dennis Itumbi.

The two are rumored to have dated before given several intimate occasions that they shared publicly including a surprise birthday party while she was live on air.

Itumbi has been consistent in standing with Jacque who together with his fiancé Joseph Irungu, have been now jointly charged for murder. The government’s digital strategist has not shied away from expressing his feelings and heartwarming messages meant for his friend Maribe.

Jacqueline Maribe, you remain in my prayers. May Justice, like many waters be done. May Monica & her family find the answers they deserve & those responsible be punished as per by law established. But may you find Justice, that you equally deserve. You got my hand of friendship

While many of her friends have not been seen publicly expressing their support neither showing up at the court, Itumbi and Maribe’s father are the ones captured on camera having gotten closer to the accused and in court during the proceedings in solidarity.

It has always been said and I agree that, "The arc of the moral universe is long, but it bends towards justice."

Though it tarries, be sure that Justice will be done my dear friend Jacque Maribe

So shall it be done for Monica and Family.

It was a show when Itumbi had the popular handshake with his ‘rival’ Jowie In Court. Jowie is the prime suspect in the murder. A teary Maribe was overwhelmed with emotions when his ‘ex’ showed up to give her moral support.

All factors aside, one thing is clear that we’re surrounded with fake friends who’ll stick around when things are merry and vanish when things go south. You don’t need many friends, keep the small circle with loyal and worthy friends. You need friends like Itumbi who stick around regardless of circumstances.