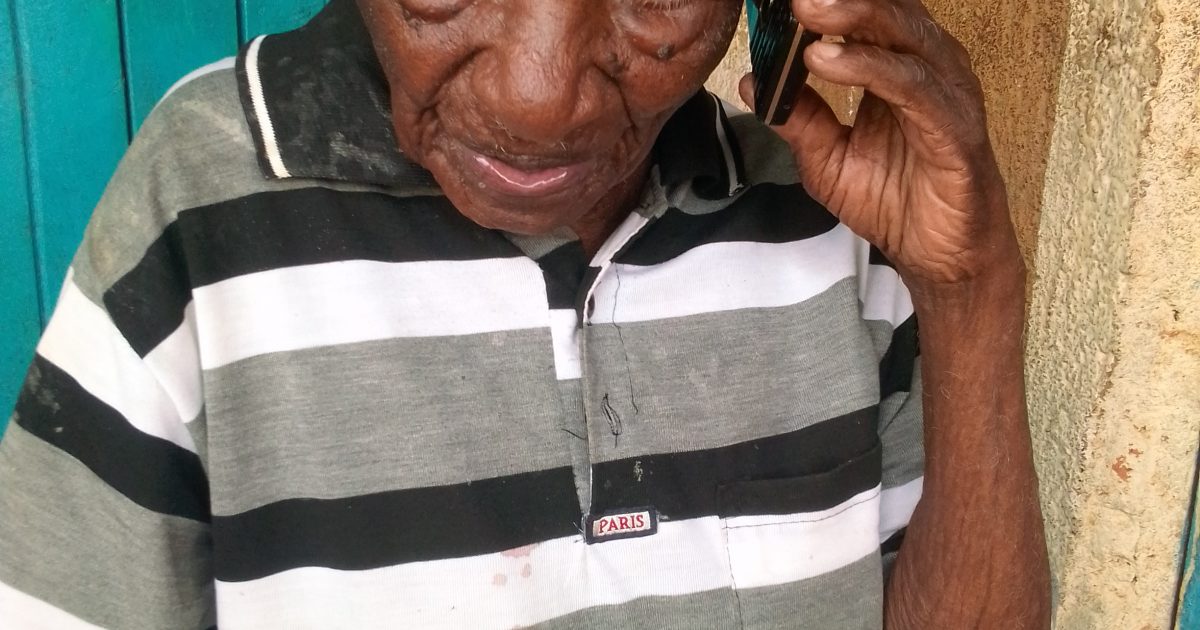 Kenya could enter the Guinness Book of Records for having the oldest man on planet earth currently if a DNA test on Julius Wanyondu Gatonga confirms him as aged 136 as indicated on his national identity card.

The supercentenarian who was born and brought up in Mukurweini, Nyeri County is not even in the Wikipendia (the free web encyclopedia) list of the 50 living oldest people in the world though according to his identity card, he is 19 years older than the current holder of the slot Kane Tanaka of Japan.

According to the Guinness Book of World Records, Kane Tanaka has clocked 117 years having been born on January 2, 1903. She was confirmed as the oldest person alive in March 2020.

According to the same encyclopedia, Frenchman Jean Calment is listed as the oldest person to have ever lived in modern times. Calment who was born on, February 21, 1875 but died on, August 4, 1997 at the age of 122 years, 164 days. So if the date of birth of Wanyondu as stated in his Identity card is anything to go by, he would break Calment’s age record by a whopping 14 years!

It is against this backdrop that the great, great grandfather’s family has called upon any interested party including both county and national governments as well as the Guinness World Records to facilitate a DNA test on him to verify his age.

“As you Know during those colonial days the level of illiteracy was very high and so my father’s birth date was not recorded. Going by the ancient stories he has been telling us he could be even older than the dates on his ID,” claimed his 76-year-old son with the second wife Jackson Gatonga.

In the sleepy village of Weru, Mukurwe-ini Sub-county, Nyeri, Wanyondu is led out of his house by his son Jackson Gatonga, 76. “Baba ũrȋ na agenȋ,” (Father, you have visitors). At a first glance, one could mistake that the supercentenarian is in his late 80s but the reality hits when you see his national Identity Card (ID).

Wanyondu was born in 1884 according to his ID but his family contends he might have been born three years earlier according to his own account on the matter. Standing about 5 feet, the jovial chocolate-faced man  says he belongs to the “Rȋka rȋa thimu” (Telephone age group), a group that was circumcised in 1908 when the telephone network was being connected in Nairobi and Mombasa. Going by Wanyondu’s indicated date of birth, he faced the knife at the age of 24 years. In those days, males were circumcised in their twenties.

“Uranjũria ciũria icio nȋkȋ? (Why are you asking me these questions?) Wanyodu asks in Kikuyu.  Tũrȋ ciana ciaku na tũrenda kũmenya thiri ya mũtũrȋre ta waku. (We are your children and we would be pleased to know the secrets of living long like you,” one of us answered in Kikuyu.

He laughs displaying a set of white dentures and says the secret is found in eating indigenous foods like arrow roots, sweet potatoes, njahi, bananas and traditional vegetables like ‘hatha’ (stinging nettle). The foods, the father of ten children says, protects one from illnesses and makes them strong. He abhors feeding on junk food that has little nutritional value.

The patriarch to whom loins over 150 living souls could be traced says he married his first wife who bore him a boy and a girl. The boy who was the first born died at his early age but the girl, now an old woman, is married in Kirinyaga County. They had eight other children with his second wife. Three are now deceased but five, including his son Jackson Gatonga born in 1944, are alive.

In his youth, Wanyondu was employed as a houseboy by an Indian in Nairobi earning Sh3 monthly. He later joined the East African Railways (now Kenya Railways) before quitting and returning home to farm. He said he engaged in coffee and dairy farming.

At the rural village, the supercentenarian said he was a great dancer and entertained villagers with Kikuyu traditional dances; Mugoiyo and Gichukia which attracted huge crowds.

Life changed for the worse when the state of emergency was declared in 1952 and Wanyondu was arrested and detained at the infamous Manyani detention camp for supplying food and other necessities to the fighters in the forest.

He bitterly reminisces with regrets that his three children died of starvation while he was being held in Manyani as the colonialists would not allow his wife to go out to look for food for them.

He vividly remembers the First World War (WW1 1914-1918), the Second World War (WW2 1939-1945), and the Mau Mau war for independence. Besides, he says he was already an adult when Harry Thuku, one of the pioneers in the development of modern African nationalism in Kenya, was arrested on March 14, 1922 in connection with his political activities.

Thuku’s arrest sparked two days of demonstrations that were led by one Mary Muthoni Nyanjiru. The first demonstration, on the March15, 1922 went on peacefully, ending after a public prayer for Thuku’s safety. However the next morning, thousands of  Thuku’s supporters gathered around the Nairobi police station to demand his release from detention. The police eventually opened fire killing at least 25 of them. Thuku was exiled, without charge or trial to Kismayu in the present-day Somalia.

According Gatonga, Mzee Wanyondu was among the people who went to pay bride price for the late mother to a 90-year-old neighbour mzee Macharia Githaiga. Macharia is now house-ridden at the same village due complications related to aging.

“And imagine Macharia who is the fifth and last born in their family, had not even been born when Mzee Wanyondu took part in his mother’s traditional marriage rights,” claimed Gatonga adding that even during his childhood, his father was well advanced in age to qualify to take part in such a respected ceremony.

Though his hearing is failing as one has to speak louder for him to hear, Wanyondu’s other senses are perfect. He can clearly see and recognize visitors who call on him.

Gatonga says his father has no history of sickness apart from the stomach surgery he went through to try and resolve the aches he experienced in the belly.  “His health is okay but sometimes complains of stomach ache,” Gatonga said.

The supercentenarian does not eat solid food but traditional nutritious foods prepared by the family members led by Gladys Mwihaki, wife to his third born child with the second wife Mr. John Nguru Wanyondu.

He advises the youths to stop consuming alcohol and smoking if they want to live long. He tells them to start engaging in activities that would generate income and eat from their sweat. Besides, he advises the youth to be God-fearing and embrace Christian values reminding them that the fear of the Lord is the beginning of wisdom (Proverbs 9: 10)

Gatonga says his father has inculcated in them the value of peace, honesty and hard work that everybody should emulate. “He has never had any quarrel with anyone neither have I ever heard of him being accused of dishonesty. He has educated us to the highest level we could individually attain,” he said.

The supercentenarian is a staunch PCEA faithful and says only God knows his time to die. He prays for his family and visitors, beseeching God to give them good health and replenish all their needs when in short supply.

Wanyondu’s family celebrates his life every August but due to the outbreak of Covid-19 this year, it was forced to shelve the ceremony. “We would not like to expose him to the virus. We are a large family and having only 15 people for such a highly rated ceremony due to social distancing, would have diminished its importance. We want would have loved each and every family member to be present,” Gatonga said.

One of the major challenges that the modern world’s Methuselah’s family has faced is registering him with the national health insurer NHIF as computers do not accept pre-1890 birthdates.

“He is deemed too old for the system, since his ID indicates he was born in 1884 and the computers only accept birth dates from 1890,” said Mr.  John Macharia, an agent of NHIF based in Mukurwe-ini in an article appearing on Sunday Nation of, August 26, 2012.

In the article, Macharia added that the family members of Mzee Wanyondu, then aged 126, visited his office seeking medical cover for their ageing parents in March 2012 but the old man’s name was rejected by the NHIF computer system.

Macharia said they resolved to use his then 89-year old second wife Beth Wanjiru (now deceased) as the contributor, as Wanyondu (then aged 128) had completely been rejected by the system.

Asked by KNA whether they managed to register the man with NHIF recently, his fifth born son John Nguru answered: “No. We repeatedly tried again to no avail. We finally decided, as a family, to meet his medical expenses whenever he fell sick. We visited Mukurwe-ini and Nyeri NHIF offices but received the same answer; his data could not be captured in the insurer’s computer system due to his age.”

Would you like to live to that age? If so then you have heard how, from the horse’s mouth; shun junk food, consume traditional foods rich in nutrients, put God first and exercise integrity.

Nyeri County is renowned for attracting national and global attention by producing great leaders and athletes. The county has at other times pulled surprises that left many in stitches. I have in mind the drama that unfolded when a man, Lemma Ayanu, who was claimed to be the lost freedom fighter Gen Stanley Mathenge was airlifted from Ethiopia to Nairobi, his reception by dignitaries, his treatment at a five-star hotel and his unceremonious deportation from the country.

General Mathenge and Field Marshal Dedan Kimathi Wachiuri, the Mau Mau war heroes hailed from Nyeri. The founder of the World Scouts Movement Baden Powel and his wife were buried here. Other great people are the late environmentalist and conservationist Prof Wangari Mathai who won the Nobel Peace Prize in 2004, the third President of the Republic of Kenya Mr. Mwai Kibaki, fiery retired PCEA Cleric Dr. Timothy Njoya, athletes Catherine Ndereva and Douglas Wakiihuri and the list continues, but perhaps Wanyondu could catapult the region’s attention if his age is confirmed through DNA as his family requests.

This region that hosts two major water towers, the Aberdares and Mt Kenya was also the ‘home’ to Sister Irene Stefani Nyaatha who was beatified in 2015. Unfortunately, Nyeri has also made history as the county that has had four governors since the inception of devolution after two sitting bosses died in office. The first governor Nderitu Gachagua succumbed to cancer and was succeeded by Mwangi Mathai while Dr. Wahome Gakuru died through a road accident barely three months into office and his deputy Mutahi Kahiga took over.

Overnight Deals Will Dig You An Early Grave, Sonko Has Some Advice For Young Men Looking For Quick Riches