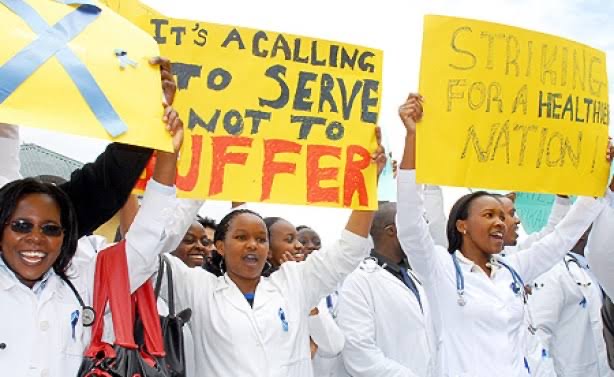 Before Covid19 Pandemic hit the world, debate over ‘who’ – who is the most patriotic cadre of frontline workers in serving the nation, whether Healthcare workers or Kenya Defense Forces comparison rented social media streets everytime whenever healthcare workers strike for better pay.
Paid influencers to antagonise healthcare workers would frequently tell off HCW to feel no better than our KDF soldiers who left their families to fight terrorists at the border. I wonder whether Doctors, Laboratory officers, Nurses, Clinical officers don’t go to the field. Smh!

Lets break some of the factual elements between these two controversial entities:

1. Lowest grade Healthcare worker is C+ student while a KDF is a D form four drop out. Academic dwarf vs Academic giant.

2. Covid19, the terrible invisible  enemy that neither KDF nor any other defense force couldn’t fight and ruthlessly swept lots of lives in a flash of time. Brought the whole world to a standstill, locked everyone in their homes and out off streets for months. Science unarguably took full control of the world.

It needed intervention of healthcare providers fraternity and scientists to help control this pandemic – invisible enemy.

Some will argue that terrorism is more of inhumane – manslaughter act but not malaria, cancer or even pneumonia but statistics have it and COVID has proven it that the ruthless killer is health matters – biological warfare.

Government sets aside budget of billions and trillions of money to secure armoury, riffles, suvs and all that defense forces need and even in excess but Healthcare workers begs to be given PPEs, delayed salaries, low wages, poor working conditions when all these two entities  are both frontline workers of the nation.

3. Countries which prioritises weapons and millitarization are forever at war and insecure and rarely gets to prosper in the midst of lawlessnes with drunken masters in power.

Well, some of these facts are discriminative in but none is ill-thought. Government should just give Caesar what belongs to Caesar.

As our Nation’s National anthem articulates about Unity, values of unity and for unity, equality and equity, Justice be our shield and defender. But why do Healthcare providers get inadequate supply of PPEs and when they are supplied then they’re of substandard quality while our Defense soldiers never runs out of full body armour and of standard quality.
Where is the equality, equity and Justice in it?

Why would government hospital fail to procure routine full hemogram equipment or any other essential laboratory equipment and if they fortunately do procure then they restock reagents and diluents once in a bluemoon while our soldiers have more than enough riffles, grenades, machine guns. Where is the equality, equity and justice?

Health has become the most life threatening terrorist in this nation, colon cancer has hit men tremendously, breast cancer has hit our women and mothers tremendously. The harsh Economy has changed the lifestyle of majority making them prone to cheap and affordable carcinogenic foodstuffs. Day in day out thousands of Kenyans travel to India to seek advanced treatments, day in day out many poor Kenyans seek healthcare fund drives through social media at an alarming rate. Health insurance companies have become the most lucrative business entities enjoying larger junk of money than any other entity.

Related Content:  AFRICA: When Development and Democracy is Compromised The Human Survival is At Risk

60% of Kenyans are unable to afford and if they afford then minority sustain private hospital charges and so their sole refuge is government facilities whose healthcare providers are overworked under pressure with no motivation, no allowance, no salaries – wages and many succumb to stroke, depression, heart attacks, some left homeless after their properties get auctioned due to heavy bank- shylock debts, unpaid salaries.

The pain is inexcess while the gain is long overdue.

As a healthcare provider, my sole objective ethicaly is to provide holistic healthcare to patients in need — with utmost favor and improvise any resource at my disposal to save lives but when I need to earn more to sustain my family back at home then am crucified like a selfish hyena, am ridiculed like a worn out politician. Like I just spent years and paid hundreds of thousands for my school fees only to paid peanuts in return? When I need more, am told am a biased ‘son of a bitch’ by the very same people whom tomorrow come begging for my service when they’ve mere headache.

A genuine and bold reminder to these drunk -arrogant authorities in power and any other enemy of healthcare provider is the fact that Doctors will forever be your Second god, will forever be the bridge between your life and death. Besides God’s natural Oxygen, we have the Oxygen plant. We treat and God heals. We’re 2 in 1.

Perhaps setting up Health Service Commission in the controversial BBI could’ve been atleast better move for the HCW fraternity. Like Teachers have Teachers Service Commission (TSC) has made work easier, their grievances have been adressed amicably, they always win the war.

Until when should MLOs -Laboratory Officers, Nurses, COs, MOs and other cadres beg to be employed as PnP – Permanent and Pensionable? Until when will they be on the street? For how long will the Employer misuse the power fire and hire everytime it oppresses its Employees? For how long will the Kenyan government champion for Universal Health Coverage (UHC) when it cant even sustain to care for basic welfare of the Healthcare providers?

Governor Korane And His Cronies Must Be Prosecuted For Gross Corruption