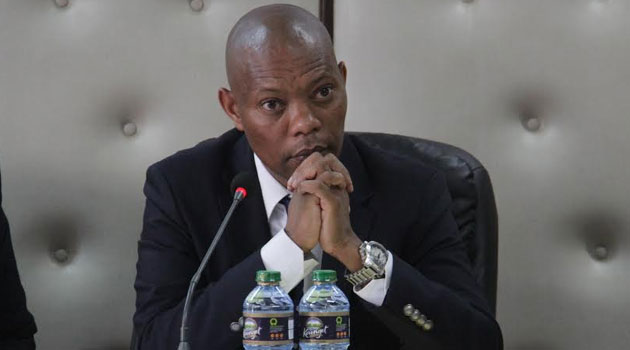 We have established that TRANSCEND MEDIA GROUP some of the work it does is charged at extortionist rates disproportionate to the work done, it has been paid millions of shillings for doing nothing beyond colluding with rogue State officials to dream up phantom jobs.

Questions exists on how TRANSCEND MEDIA group acquired the lucrative tenders at the NYS during Anne Waiguru tenure at the ministry of devolution. We can authoritatively confirm that these tenders at NYS did not just come out of the blues but through a well-orchestrated web that is deeply rooted in the Transcend Media Group Management. Apparently we have been able to establish that Tony Gatheca (CEO and co-founder Transcend Media Group) has a blood sister called Winnie Wambugu.

Winnie Wambugu was at some point a close friend and advisor to Anne Waiguru. This explains why the multiple highly priced multimillion tenders were awarded to Transcend Media Group.

Ms Waiguru, who resigned last November and is under investigation by the Ethics and Anti-Corruption Commission over the loss of Sh791 million at NYS, is said to have hired advisers and consultants to work in her office for roles that could be performed by civil servants.

Transcend Media Group, for instance, received Sh49.6 million in May 2015 “in respect of event concept cost for hosting Kibera Youth Empowerment Programme” – a presidential function that lasted only a few hours. Mind you there is always a presidential budget for this.

The same company was paid Sh7.9 million for publicity and roll-out of NYS re-branding and Sh48.9 million for delivery of an interim report on consultancy on NYS rebrand contract.

In January 2015, Transcend Media Group was also paid Sh71.2 million for “publicity roll-out of National Youth Service Re-branding” and “implementation of NYS media flighting” and a further Sh32.6 million “for offering consultancy services for the rebranding of NYS.”

Documents indicate that Transcend Media Group, which is also offered many other services to the ministry of devolution, was paid Sh49.6 million for “event concept cost for hosting Kibera Youth Empowerment Programme”. This included organising the evening event to launch a street lighting project on December 11 last year that was attended by the President, Deputy President William Ruto and Devolution Cabinet Secretary Anne Waiguru.

The event lasted from about 5 pm to 10.30 pm on the eve of Jamhuri Day at the DC grounds in the expansive slum.

There were about a dozen tents, two platforms — one for the President’s entourage and the other for guests. Entertainment was largely sourced from groups in the slums although some national artistes like gospel singers Gloria Muliro and Bahati also performed.

Well a cool ksh.50million for only 5hours! Is Ok! Transcend Media Group is indeed a growing business

It is important to note that another company was Alpha Mercantile which supplied plastic water tank and sugar. The payments were Sh6.7 million and Sh7.5 million in that order. The company was registered in December 2013 under the ownership of Njeru Mucheru, Simon Migwi and Dainah Wanjiru. So if you think we are hitting at TMG think twice.

These incidents point to abuse of consultancy in government with the perpetrators using it to cover up their financial greed. Transcend Media Group used Winnie Wambugu a personal friend to Anne Waiguru to loot the public coffers. Nothing is further from truth that makes this TMG a briefcase consultant hell bent on sucking blood our of Kenyan tax payers. TGM forms the category of the super-paid public servants largely made of campaign financiers and political loyalists, and close family members of the people in power.

Meanwhile it is important to mention here that CEO and co-founder Tony Gatheca’s uncle Mr Wanjiki Muchemi was a solicitor General in the Kibaki Government. Keep in Mind that during the same period of the grand coalition Government Michael Njeru was the errand boy for Raila Odinga. This exclusively explains why the duo could land lucrative Government tenders from both sides of the coalition. Michael Njeru is the chairman of the Transcend Media Group.

Among other Government tenders that Transcend Media Group acquired dubiously include the current tender at Kenya Power that many people across board feel that it wasn’t acquired in accordance to procedure. The Current Kenya Power MD is facing a case in court over several malpractices at the company.

NYS Fraud: Could Waiguru Be Innocent And Ruto Guilty, We Archive Jacob Juma’s Take On The Billion Heist