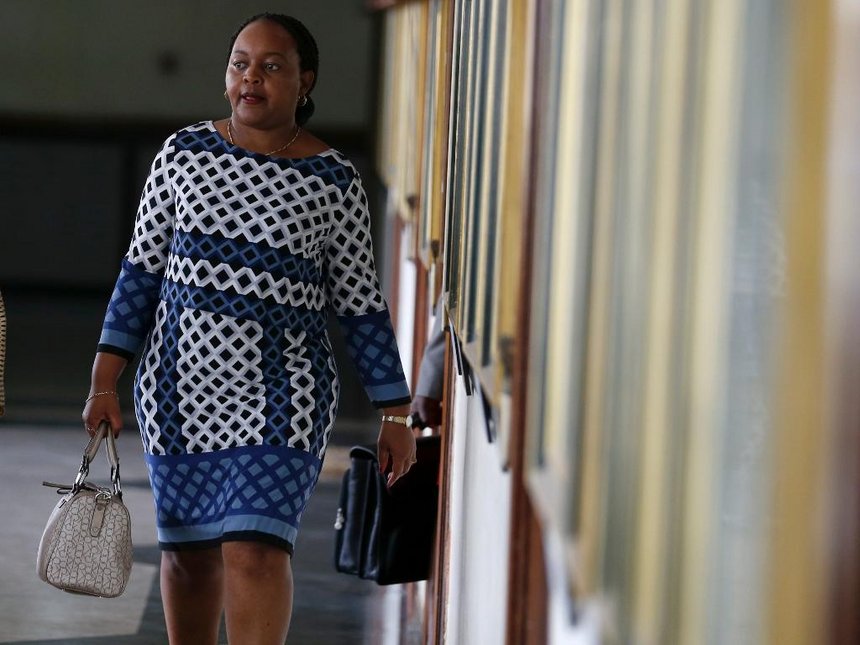 It was a long day for former Devolution CS Waiguru when she appeared before the PAC to answer to questions on the NYS that is estimated to have cost taxpayer upto 2B.

Ben Gethi who’s at the center has already been grilled by the committee in which he denied involvement in the heist despite million discrepancies attaching him to the scandal .

Kabura who’s sworn in an affidavit to be a protege of Waiguru who allegedly called her onboard from the saloon business she was engaging and turned into an overnight millionaire. Her arrogant testimony left many in shock during PAC grilling.

Among those Ms Waiguru named in documents handed to MPs were Farouk Kibet, an aide to Deputy President William Ruto, whom she claimed was constantly on the phone with prime suspect Ben Gethi in the days before the theft was executed.

Waiguru told members of the PAC that Gethi and Farouk had 262 phone calls between them before and during the transactions through companies associated with another key suspect, Josephine Kabura.

Waiguru termed Kabura as a puppet of the cartel of Gethi and his operatives who are powerful individuals in government.

In a clear exoneration move , claimed that the said cartel had set aside Sh200 million for a smear campaign that would frustrate investigations, in a super scheme to shake detectives off at every turn.

Waiguru has been named by various witnesses as the mastermind of the scandal, including claims by her former PS Mangiti that she issued illegal instructions, including in the hiring of Adan Harakhe to the non-existent position of Deputy Director General of the NYS.

Harakhe was subsequently designated as one of the people with authority to incur expenditure at the ministry.

With everyone shifting blames and committed to demonize the other and investigative bodies so far not giving any substantial direction as to the real thieves , Kenya Insights has reviewed past tweets of slain Jacob Juma . Juma tweets have become truth reference lately in his death.Jacob was also known for wide intelligence network that he used to bust the corrupt deals. Could they be holding stint of truth? Be the judge ;

The elusive master-mind of NYS scam, BENSON GETHI uses an office that was given as a gift to William Ruto at China Wu Yi center in Kilimani.

WAIGURU is INNOCENT in NYS SCAM. We have to tell the truth.Truth shall set us free. Maryanne, Ruto's Chief of Staff is behind Waiguru's woes

Mugwanja, the Head of Banking Fraud Unit is very frustrated over NYS scam. William Ruto's people(Farouk & Murkomen) have harassed him.

Ruto's people have been pushing Mugwanja, head of ABFPU to re-direct the blame to innocent people including junior NYS staff.

He contradicts himself and links Waiguru to tge scam here

If Uhuru for instance imprisoned Ruto for land grabbing, Waiguru for NYS scam, Rotich for $140b Eurobond, just imagine his popularity rating

Mr @HonAdenDuale @MutahiNgunyi, Murkomen, Farouk Kibet worked behind the scenes with the blessing of Ruto to loot public coffers from NYS.

Mr @MutahiNgunyi was part of the William Ruto team that blatantly looted NYS. He paid back by tweeting in his praise pic.twitter.com/RdDCiNUooG

If Mr. Farouk Kibet fraudulently obtained sh40 million from NYS and bought 2 houses at sh70m, how much did Ruto get? pic.twitter.com/AAFSE3QMzT

If Ben GETHI bought properties worth sh148m only out of sh800m NYS loot, who pocketed the rest? Who is protecting Farouk Kibet, Ruto's PA?

Ben Gethi frantically called over 200 times and talked to Farouk Kibet and Murkomen when he was in custody over NYS. pic.twitter.com/ThAvyw3dOR

The devil is in the details

@AnneWaiguru Your Royal Highness Baroness Waiguru, do you know J. Kabura? If so, when did you meet first, last and where?

Related Content:  How The Blacklisted China Communication And Constructions Company(CCCC) Bulldozed Themselves Into A KPA Inflated Tender Of Sh40B From Sh12B
Kenya Insights allows guest blogging, if you want to be published on Kenya’s most authoritative and accurate blog, have an expose, news TIPS, story angles, human interest stories, drop us an email on [email protected] or via Telegram
Related Topics:
Up Next