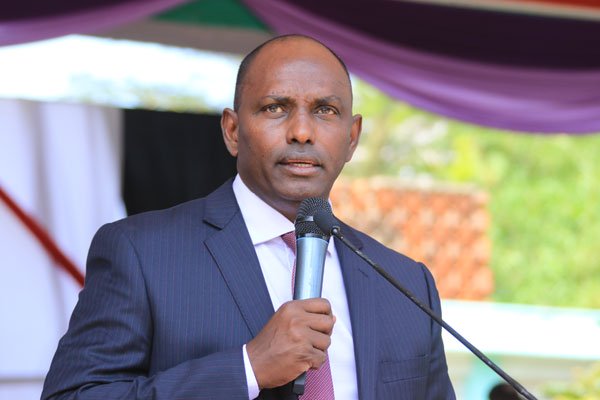 Responding to Chief Justice David Maraga’s rant on Monday, acting Cabinet Secretary for National Treasury, Ukur Yatani, has told the CJ the country is in no position to offer the Judiciary more money adding that the budget cuts are final.

Speaking to journalists, Yatani stated that the CJ was putting the judicial services above the all other government services which are critical. He also accused judges and magistrates of standing in the way of tax collection by indifferently treating tax dispute suits before the courts without appreciating that the same taxes are their main source of income. “When we try to collect taxes, people run to the Judiciary to challenge the measures and are given orders stopping us,” the acting CS said.

Yatani claims budgets cuts are a must, this is because the country had been living beyond its means before his appointment after the suspension of his predecessor Henry Rotich. He faulted Rotich’s approach to budget-making process which was informed by unrealistic revenue projections that forced the government on a borrowing spree to plug the funding hole.

The CS had earlier stated that the Treasury had not slashed budgets for any arm of the government but had instead introduced a raft of austerity measures to ensure prudent use of resources.“You can have your money, you can even carry it forward, but we will release money to you based on what we can afford at that period,” the CS had earlier said.

During a press briefing earlier this week, the CJ expressed dissatisfaction at the Executive following a cut in the Judiciary’s budget.  Lashing out at acting Cabinet Secretary for National Treasury, Ukur Yatani, he accused the CS of overstepping his mandate by trying to control the budget of the Judiciary. “Unless the budget cuts are reversed, we do not have money for fuel, we will not have mobile courts, we will not have the court of Appeal circuits, we will not be able to pay for wi-fi for the e-filing and e-payments, plans to automate corruption courts will halt.” He stated. He said the National Treasury does not have any power to tamper with the funds allocated to the Judiciary once it has been passed by the Parliament. “None of the three arms of government should control another.”

He argued that a section of functions in the Judiciary have been disrupted, including the inability to administer special court sittings due to the lack of funds. A court has already given interim orders stopping the Treasury CS from slashing the Judicial budget in a case filed by the Judicial Service Commission.

“Pending the hearing and determination of this case, an order is hereby issued restraining the National Treasury, its agents, officers or any persons from implementing a September 24 circular or issuing any unwarranted directive with the same effect on the judiciary’s budget,” said Justice Makau Mutua of the High Court.