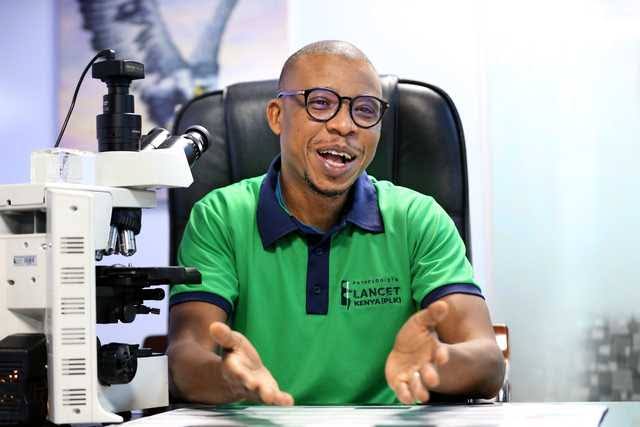 Licensed Private Laboratory – Lancet has been recieving blows derailing its public trust as patients whom they diagnose as positive turns out negative on repeat testing at Government testing facilities.

The laboratory was early in the month under scrutiny following claims by a number of Kenyans that results of the Sars-CoV-2 tests it carried out were not credible.

In the past two weeks, the laboratory has been investigated and inspections carried out by several government agencies, including the National Covid-19 Command Centre.

Two women received two sets of results from different labs with one (Lancet) showing they had coronavirus while repeat tests at Nairobi Hospital indicated they were negative.

On July 7, the Kemri and Lancet Laboratory Mombasa gave contradicting Covid-19 results for the same samples.

On June 8, Khalid Nafula Mwanaidi’s sample was taken by the lab in Mombasa and the results came back as positive on June 15.

Kemri did the a test on the same Kenyan and she was declared Covid-free.

Lancet is also being investigated for “misdiagnosing” Kiambu MP Jude Njomo’s mother. The family hurriedly buried its matriarch after being told she died of Covid-19.

A repeat of the test at Nairobi Hospital returned negative results, prompting the lawmaker to ask the Ministry of Health to investigate the contradicting results.

The samples were taken a day after the Lancet results.

Lancet Kenya is once again on the spot over discordant Covid-19 results of 17 teaching staff of St Andrew’s School Turi, who tested positive and negative three days later.

Some 24 samples were picked from the institution and taken to Lancet for testing.

However, when the school sought a second opinion and the samples taken to the Kenya Medical Research Institute (Kemri), the 17 turned negative, according to the results the institution received on Tuesday 15th.

An email by the school management to the staff after receiving the Kemri results says operations will remain as they were. “Dear team, further to the tests by the Public health team, results have come back…negative. The school will run as normal. The common areas that were closed are now open,” the email to the staff.

Routine confirmation of cases of COVID-19 is based on the nucleic acid amplification tests (NAAT) by detecting unique sequences of viral RNA (WHO, 2020g). This test can be performed by real-time reverse transcription polymerase chain reaction (RT-PCR) technique. Real-time RT-PCR is a popular technique in molecular biology (Freeman et al., 1999) for monitoring the amplification of a targeted DNA molecule in real time. Whereas RT-PCR combines reverse transcription of RNA into DNA and PCR amplification of the DNA followed by readout using fluorescence (Bustin et al., 2009). The test is done by collecting respiratory or blood samples. The respiratory samples are obtained by a nasopharyngeal swab. The nasopharyngeal swab is a collection method of clinical test sample of nasopharyngeal secretions from the back of the nose and posterior pharynx (WHO, 2020g). The swab used for nasopharyngeal collection is a narrow stick made of a short plastic rod that is covered, at one tip, with adsorbing material such as sterile Dacron or rayon and ensuring viral transport media (WHO, 2020a). The test results are generally available within a few hours to two days.

So, in layman’s language— Covid19 test is PCR based which detect Genetic information of the virus, only possible when the virus is present and someone is actively infected. There are three genes being targeted during the test, E gene, N gene and RdRp genes. E gene is enveloped gene thus – it’s used to detect the existence of all types of corona viruses ? which include SARS, MARS and now Covid19 and thus give positive results for all common viruses in the family eg flu and common cold.

The RdRp gene in combination with E gene and N gene are more specific in looking for the severe acute respiratory syndrome and also the strain of the virus. Due to high cost that is required to run both the three test most facilities resort to doing E gene which is much cheaper but non specific. That is why people test positive when testing is based on E gene but results become negative when all the three mixed assays are used.

As per WHO regulation E Gene is for screening while N, RdRp are confirmatory so most country are testing atleast two or more genes to be certain (Corman et al.,2020; WHO 2020f)

“For a routine workflow, we recommend the E gene assay as the first-line screening tool, followed by confirmatory testing with the RdRp gene assay. Application of the RdRp gene assay with dual colour technology can discriminate 2019-nCoV (both probes positive) from SARS-CoV RNA if the latter is used as positive control. Alternatively, laboratories may choose to run the RdRp assay with only the 2019-nCoV-specific probe.”

“Initial testing algorithms and expert opinion from the European Centre for Disease Prevention and Control (ECDC) advised that E gene amplification in isolation should be treated cautiously, due to concerns of non-specificity and issues related to contamination of reagents. Early experience at Sheffield Teaching Hospitals NHS Foundation Trust (UK) on serially sampled patients with confirmed SARS-CoV-2 infection suggested that E gene detection persists beyond RdRp detection, and may offer enhanced diagnostic sensitivity. Therefore we explored the significance of E gene detection in relation to RdRp, and in the absence of RdRp detection in a retrospective evaluation of SARS-CoV-2 RT-PCR testing. “ ( Hayley Colton, Michael Ankcorn, […], and Cariad Evans Research)

“From the E-only positive group (n=319), 69 (21.6%) samples had low level amplification in the E gene (cycle threshold (CT) ≥35) and were investigated further. Within this subset, the majority (n=59, 85.5%) were considered to be true positives because they were either a) confirmed by an alternative assay (n=48) or b) a preceding or subsequent sample was positive for both E and RdRp (n=11)”

Could it be that Lancet bases its tests on E-gene being the cheapest assay to perform but the least sensitive one?