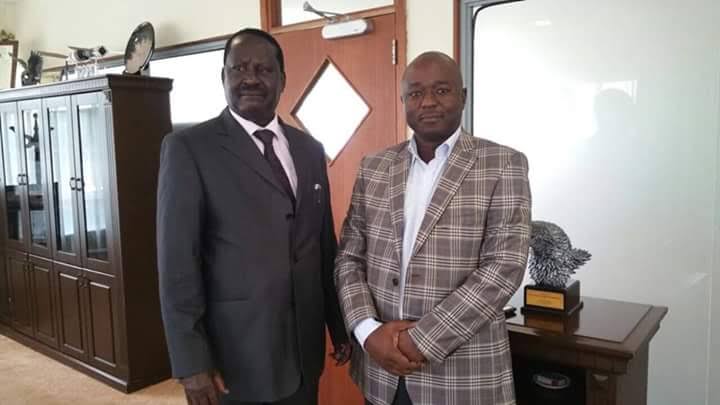 While former PM has made a name for being anti corruption sizer, elements in his camp are working against him. Uriri MP and Managing Director of Horizon Media Investments Limited Eng Mark Ogolla Nyamita is one such character. According to the allegations, Mark colluded with Pro Gas a company recently exposed for defrauding unsuspecting Kenyans.

A government’s Gas yetu project that was put in place in October of 2016 to make gas affordable to the common mwananchi appears to have been forgotten 2 years later.

The project collapsed due to allegations of corruption, lack of funds and supply of defective cylinders that pose safety risks to users, however, this was notvthe case.  The project was shelved due to corruption and bribery at the energy sector resulting in the government ceding the bulk importation of LPG to Africa Gas and Oil Ltd and in the process denying  the country the benefits of cheap cooking gas.

In 2017 the government allocated Gas Yetu Ksh2.2 billion for the period 2017-2019. A further Ksh700 million was allocated through a supplementary budget raising the total cost of the project to Ksh2.9 billion. Gas yetu project would see millions of households receive subsidised 6kg cooking gas cylinders at a cost of Ksh 2,000. 5 million households were targeted.

Investigations into what led to the collapse of the project reveals a well calculated plan by Pro Gas owner by Abbas Bilgrammi and associated with tycoon Mohammed Jaffer to kill Gas Yetu.

The government awarded the Gas Yetu tender to a consortium led by Allied East who did not have the ability to deliver, they in turn turned to Jaffers Africa Gas and Oil (AGOL) which also owns Proto who supply Pro gas.

AGOL supplied over 67,251 faulty cylinders which were leaking in the first batch. This was however a grand scheme as the PS Andrew Kamau immediately cancelled the tender purchase despite millions of money having been paid out to Jaffer.

Pro gas has been accused of hiring thugs to steal gas cylinders from competition and then rebrand to sell at incredibly low prices resuting in calls by the LPG Cylinder Exchange Pool to have the company regulated.

The Exchange Pool members further say they have evidence PS Njoroge gets sh30 million every month in bribery while other officials in the LPG sector pocket not less than sh10 million each month.

Mark himself a JKUAT civil engineering graduate and owner of Horizon Media was tasked to engage in a Métis activation for Gas Pro that would later turn out to be a major scam.

Ogolla who has been running his PR firm since February 2013 to date and has won several tenders in the banking and telecommunication and technology industries owing to his banking and communication background having served as head of Corporate sales at Airtel kenya(Zain Kenya) and as a sales manager of Standard Chartered, is a man of questionable traits.

Related Content:  Thieves Are Getting Smarter, Failing To Report On Your Stolen Phone To The Police Could Land You In Jail

Tasked by Pro Gas, Nyamita’s PR firm quickly adopted a strategy out of the many floated ideas to boost the social media presence of Pro Gas Kenya company during their campaign for the sales of Pro Gas cylinders dubbed ‘The celebrity photoshoot’. In this strategy, social media influencers were invited for a photoshoot in the Pro Gas limited mobile studios. The photos would then be uploaded on Pro Gas Kenya social media pages and the person who would garner the highest number of likes would automatically become the winner. 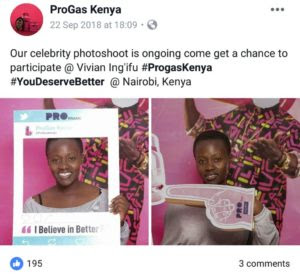 “#WeBelieveInBetter and #YouDeserveBetter too. Become and instant celebrity and stand a chance to win awesome giveaways, complete 6kgs and 13kgs Gas cylinder and a cash prize of up to Kes. 100,000 and Kes. 20,000 Weekly.
Follow and like our page and become a winner today.
#ProgasKenya #Progas #KenyanMade #Reliable #Clean #Energy #Winners #Gas #Kitchen” read one of their updates. 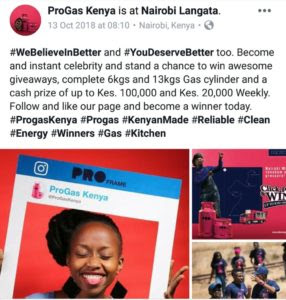 Hundreds of unsuspecting social media influencers joined the competition. Weeks passed without any award including weekly draws but they kept on pushing. A number spending to have more likes. The deadline for the draws came but none of the participants were awarded. Six months later, not a single participant has gotten anything or an explanation as to what could have transpired. It then dawned on the participants that they were duped.

While the truth is none of these allegations are anything new and probably out in the public, the really big question is how is the former Prime Minister and anti corruption champion has been swallowed into all these and remains silent. 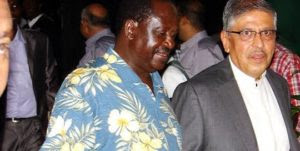 Raila and Jaffer at a past event.

In the recent unsubstantiated claims, Jaffer has been accused of buying himself out of authorities radar and scrutiny. In spirited media campaigns, the Mombasa bases tycoon is accused of sponsoring and shutting down the several investigations including parliamentary investigations that he bought off MPs where the Uriri MP is mentioned though Kenya Insights can’t authoritatively hold the claims right.

While all these remains mere allegations, Kenya has competent investigative authorities that are able to follow up everything to the last letter and that the courts are there to arbitrate on falsehoods, at Kenya Insights, we stand for Kenyans and that fairness and business ethics must be adhered to. We’d want to have the in and out of Pro Gas accusations approved or disapproved. More importantly, we want the consumers security guaranteed from unscrupulous businessmen.