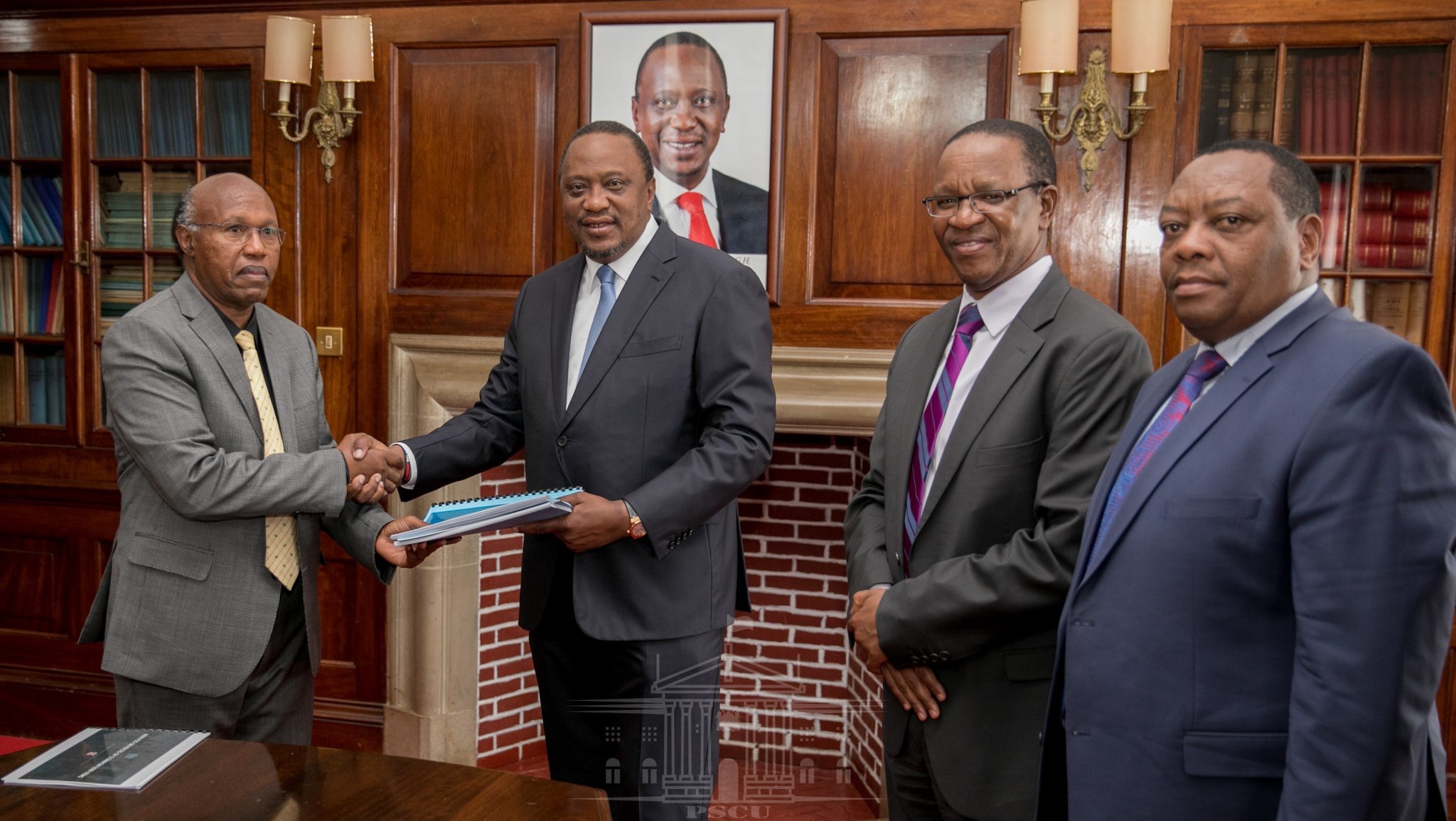 President Uhuru Kenyatta today at State House, Nairobi received a Report on Kimwarer and Arror Dam Projects from the Technical Committee he formed following the discovery of irregularities and improprieties surrounding the two infrastructure projects.

At its formation, the President tasked the Technical Committee chaired by Principal Secretary for Infrastructure Prof Paul Maringa and comprising of Quantity Surveyor Julius Matu, Eng Benjamin Mwangi and Eng John Muiruri to assess the viability of the two dam projects and report to the Head of State within 30 days.

In the course of their assignment, the Technical Committee reviewed the designs, technical sustainability and financial proposals of both dams and established as follows:

The KShs 22.2 billion Kimwarer Dam was found to have been overpriced and that the project is neither technically nor financially viable.

The committee established that no current reliable feasibility study had been conducted on the dam project.

The only feasibility study carried out on a similar project twenty eight (28) years ago had revealed a geological fault across the 800 acre project area, which would have negative structural effects on the proposed dam.

The Technical Committee also established that the project area is settled and would require compensation of displaced residents.

According to the technical design of the Kimwarer Dam, the water supply mechanism would involve pumping, an aspect the Technical Committee found to be unsustainable in terms of operations and maintenance costs.

Further, the Technical Committee established that the pumping would make the project financially unsustainable in the long run.

Related Content:  China Is Planning To Put Up A Military Base In Kenya Soon, Pentagon Reveals

Therefore, the Technical Committee recommended to the President that the Kimwarer Dam project be discontinued.

After a detailed technical review, the Technical Committee was satisfied that the Arror Multipurpose Dam Project is economically viable but noted that it was overpriced.

As such, the committee recommended to the President a cost rationalisation plan that will ensure the project is implemented cost effectively without affecting its performance and out put.

As part of the cost rationalization plan, the Technical Committee has prepared a new Bills of Quantities (BQ) for a modified dam with its height scaled down to 60 metres from the original design height of 96 metres which was found to be unviable.

The optimized dam will be technically viable since it will only require about 250 acres of land and cost KShs 15.4 billion with power and Shs 13.1 billion without power. The dam was previously estimated to cost KShs 28.3 billion.

President Uhuru Kenyatta has accepted the report on the two dam projects as prepared and presented by the Technical Committee and directed as follows:

(a) The immediate cancelation of the Kimwarer Dam project which was found to be technically and financially not feasible by the Technical Committee;

(b) The immediate commencement of the implementation of the Arror Multipurpose Dam project with the new design components and cost rationalization plan as developed by the Technical Committee.

Kenya Insights allows guest blogging, if you want to be published on Kenya’s most authoritative and accurate blog, have an expose, news TIPS, story angles, human interest stories, drop us an email on [email protected] or via Telegram
Related Content:  With Speaker Justin Muturi And Aden Duale In Parliament, Kenya Is Yet To See The Worst From The Eccentrics
Related Topics:
Up Next

Photos: Akothee Speaks Out Following Her Mini Dress To The Parliament Fiasco

Ezekiel Mutua Speaks Out On The Vulgar Consolata Boy