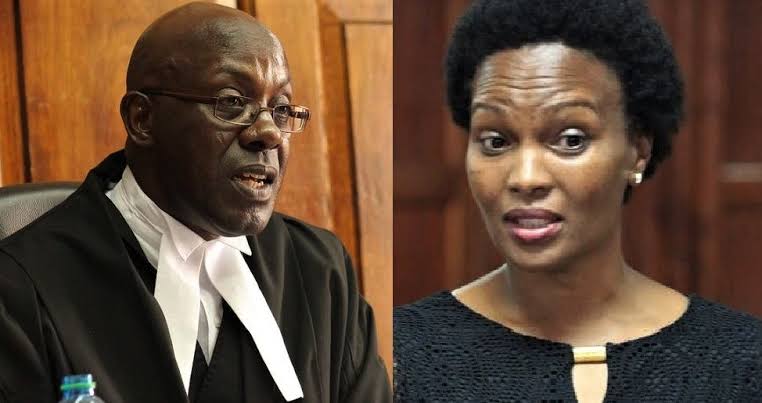 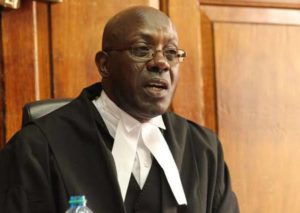 In June 2018, Justice Kantai began budding into limelight when he disqualified himself from the Embu Governorship case, saying one of the parties tried to compromise him. Rare of what majority of Kenyan judges would do.

Justice Kantai was among several judges affected by a reshuffle in February 2019 when Chief Justice David Maraga transferred him from Nyeri to Nairobi, alongside Malindi’s Justice Wanjiru Karanja and Kisumu’s Hannah Okwengu and Jamila Mohammed.

The Judiciary said the transfers were normal and routinely, in line with the requirement for Court of Appeal judges to serve in a station for two years.

The judge was sitting on the terrace of Kisumu’s Aqua Pool Bar on the second floor of Acacia Premier Hotel, watching the sun set as he waited for the murder suspect.

From here — and there is a panoramic view of Lake Victoria below — he could see the plane carrying the suspect as it approached the airport from Nairobi.

And now, the judge could be in trouble for cavorting with a murder suspect in a case that might shed light on the rot in the Judiciary.

The suspect had reached out to him, hoping to get some advice just in case she was caught or if the police implicated her.

But the judge was in Kisumu attending a workshop, according to documents left at the hotel where he was booked in Room 405.

Investigations by the Nation and Kenya insights indicate that the judge not only paid for the suspect’s ticket to Kisumu using M-Pesa, but also kept speaking to her as she boarded the flight on the day he sent his driver to pick her up and take her to the airport.

“Good morning. Driver left five minutes ago. He is coming for you,” the judge wrote.

“OK love,” she replied. “Pack mosquito repellent if you have,” the judge wrote in another SMS.

“Done.” After several minutes she wrote: “Hi. Driver has picked.”

At the Wilson Airport, the suspect once again sent an SMS to the judge telling him that she was boarding the aircraft: “Did you get medicated or shall I pick something en route once landed … We are boarding now.”

“I have a cough syrup and lozenges. There is no steam bath here,” he wrote.“Hi hun. I have checked in and now the long wait to boarding.” “CU soon,” replied the judge, attaching a kiss and the classic love heart emojis used as expressions of love.

We haven’t ascertained whether the two were in any relationship, but the flow of the conversation was suggestive of an ongoing love affair.

There are no records at the hotel to suggest that the suspect booked a separate room — and there is no evidence, either, that she left the hotel on that day.

That evening at the Aqua Pool, the two ordered a whole Tilapia and one “Catch of the Day”.

It was delivered to Room 405 and a service charge of Sh2,800 was entered around 11pm in the name of the judge. They were also served with some whisky.

There is evidence that the two were still together the next day, and at about 4.30pm she ordered a Blue Berry cake only for the afternoon to be disrupted by a call from the police in Nairobi who wanted her to report to Kilimani, urgently.

Related Content:  Missing Links In Monica Kimani’s Murder As Police Struggle To Nail The Biological Identity Of The Killer Admitting Jowie Is A Hard Nut

The judge, using his mobile phone and M-Pesa account, booked a ticket for the suspect and she flew out of Kisumu the following day.

In Nairobi, the suspect scanned copies of the media coverage and story links and sent them to the judge before she went to record her statement with the police the next day.

Sources say that she asked for a soft copy of her statement, which she immediately sent to the judge: “This is what the police have recorded; peruse, add/remove what is necessary and return …”

The judge received the copy. He then sent the copy to the suspect, who took the copy back to the police station.

Tob Cohen’s widow and main murder suspect Wairimu was freed on bail on 11 October, 2019 after spending 43 days in police custody following her arrest by DCI officers when she appeared at the directorate for questioning.

Apparently, Justice Ole Kantai was also arrested on Friday, 21 2020 while in Kiembeni, Mombasa and grilled by the homicide detectives in connection to this murder case before being taken to Muthaiga Police station. Released on Police bond on Saturday, 22 after spending a night behind bars with a condition to report back to the DCI on Monday, 24 for further interrogation .

Police are also said to be considering charging Justice Kantai with accessory after the fact in the Tob Cohen murder case.

Kenya Insights allows guest blogging, if you want to be published on Kenya’s most authoritative and accurate blog, have an expose, news TIPS, story angles, human interest stories, drop us an email on [email protected] or via Telegram
Related Content:  The Evil Kenyan Gospel Music Industry Cartel
Related Topics:
Up Next