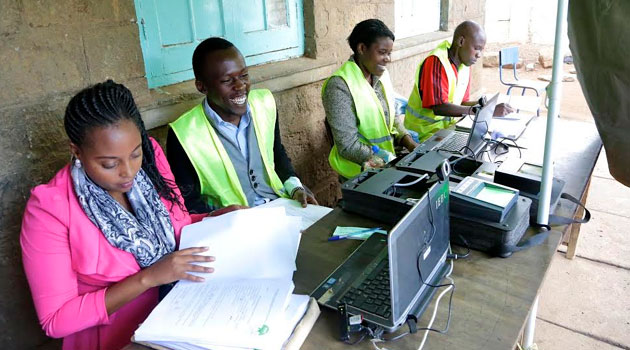 Young Kenyans blame the Jubilee ruling party for having failed to deliver the one million jobs, the 500,000 affordable houses, new stadiums in each county and free laptops in primary schools as promised during campaigns.

With only a few days to go before the IEBC mass registration exercise comes to an end, a paltry 750,000 people have been registered as new voters countrywide, this is out of a projected 8 million people.  Kenyans below 30 years of age make up 80 per cent of the 50 million population, yet they have simply refused to register.

This becomes the lowest mass registration exercise since the return of multi-party elections in 1992. A survey at IEBC registration centres revealed little or no activity as the youth kept off. IEBC clerks sat idle some busy on their phones or playing games.

The IEBC chairman Wafula Chebukati is blaming voter apathy for the slow pace in registration but is optimistic they will show up on the closing day. Many warn he could be in for a long disappointing wait as frustrated jobless youth appear to have decided enough is enough.

Jubilee party failed to deliver the one million jobs, 500,000 affordable housing, new stadiums in each county and free laptops in primary schools promised during their campaigns.  The same jubilee government they say has used trigger-happy police officers to kill them daily “like rabid dogs!”

Mysterious disappearances of people who turn up brutally murdered have raised concern across the country. A “hit squad” within the police force is being blamed for the killings whose investigations go nowhere! “After killing us and not giving us jobs they now want our votes”, several groups of youth told The Weekly Vision Online.

When reminded by some anchors on call-in radio stations that failing to vote could see “bad” leaders emerge, some asked, “At what stage of our lives has political leaders in Kenya ever been reliable?”

The low voter registration turnout has alarmed Deputy President William Ruto and opposition leader Raila Odinga. Both presidential front-runners are banking on a critical block of support from young Kenyans. DP Ruto dangling the “hustler” gospel expects mostly young people below 30 to back his drive to become Kenya’s 5th president.

So is Raila Odinga who has promised Khs. 6,000 to unemployed young people each month if elected president! But the youth do not seem to be buying into this at all! Many say it’s the usual “lies” immediately forgotten once the leaders assume office! The IEBC chairman Chebukati and his team have been accused of failing to anticipate the situation.

IEBC should have conducted civic education using the massive Ksh. 40b allocated, they say. It would then have been able to read the public mood correctly and mitigate early enough. August 2022, they predict could see one of the lowest voter turn-outs in the country’s history.

It would also make it difficult for an easy 50+ 1 victory for presidential contenders. This would set the stage for a gruelling run-off.  The exercise that closes on November 2 2021 cannot be extended, Wafula Chebukati insists.

Kenya Insights allows guest blogging, if you want to be published on Kenya’s most authoritative and accurate blog, have an expose, news TIPS, story angles, human interest stories, drop us an email on [email protected] or via Telegram
Related Content:  The State's Muscles Flexing On NMG Journalist Walter Menya Sends A Chilling Message
Related Topics:Independent Electoral and Boundary Commission (IEBC)voters registration
Up Next