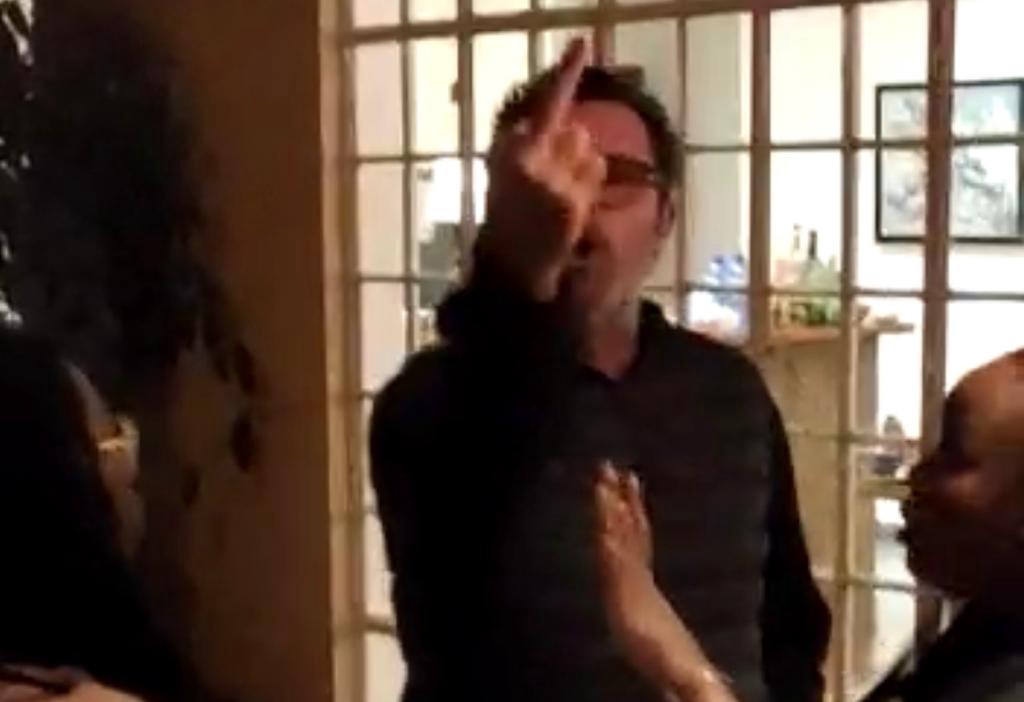 A man who appears drunk and has since been identified as Philip Van De Graaf is caught on tape invading the privacy and storming into a party in a neighboring door. Full of entitlement, he orders the occupants not vacate since it was past curfew time.

Funnily, this was an AirbnB property and only him knows where he got the audacity from. He goes ahead to hurl insults at the members who were only having a good time. Seen staggering, he gets into physical assault ending up stumbling to the ground.

Thogori Karago who was the host of the party, narrated how a post wedding lunch party for her brother with a few friends and family went awry.

On September 12th 2020 I was hosting a few friends and family for a post-wedding lunch for my brother on at my rented AirBnB located in High View area, Ridgeways, Nairobi.

At exactly 8.30pm we were having a vote of thanks speech amongst ourselves to conclude, when we were shocked upon the arrival of an intruder from a small gap in the garden shouting, flailing his arms and claiming we must exit the premises. As the person renting the premises i asked the gentleman who initially failed to identify himself or request entry onto our property or provide his name and details and purpose. However, much to my dismay he refused to disclose and continued shouting and addressing me and my friends aggresively.

Upon his close approach on my porch and personal space i asked him to calm down and step away as he continued to shout verbal abusive words and racial slurs towards me and my friends. Thereafter, he realised he was being recorded by several people hurling vebally abusive language and and he began to attack — pushing and hitting those who tried to protect themselves.

The man continued to hurl the insults and threaten physical assault using words such as ‘i will kill you’ and ‘fuck you’ repeatedly and proceeding to scream calling the diplomatic police. He ensued to use several objects around him to attack us and destroy personal property located in the porch area unprovoked. He also went and got his guard dog and brought it to our property in an attempt to use it against us.

Due to our fear for our safety (I was unsure if he was armed) I asked our guests to enter the house and I locked ourselves in the house and called the local police from the designated jurisdiction Muthaiga Police station and were assigned Police officers Noor Abdi and Veronica Bett who came to the property and listened to our greivances regarding the earlier events and took evidence.

The aforesaid officers sought to engage the man at his premises alongside his security team from BM and Kenya Police whereby he refused to admit liability for causing unnecessary disturbance, verbal and physical assault towards several persons as they attempted to defend themselves.

During the discussion with the police, he identified himself as an employee of UNICEF Nairobi and disclosed his name as Philip Van de Graaf alongside his wife, another relative and dog. Notably, we also observed his numberplates at his premises as Toyota Land Cruiser XXUNXXK , Toyota Prada XXUNXXXK and lastly Land Rover XXXXXX.

It has also come to our attention after engaging several staff at the premises he has a history of substance abuse, hurling racially verbally abusive language and using his dogs against the guards assigned.

Related Content:  Paris Court Approves For Kabuga’s Transfer To Tanzania For Trial At The UN Court

Yesterday, Sunday 13th September 2020 we reported the assault to the local police. We also reported this to UNICEF Integrity on the same day via integrity1@unicef.org. We are yet to hear back from UNICEF. We are ready to provide several witnesses and have submitted this as an official compliant of Phillip Van de Graaf’s unwelcome and unsolicited behaviour and verbal and physical assault towards myself and others as a foreign national and diplomat resident in my country Kenya.