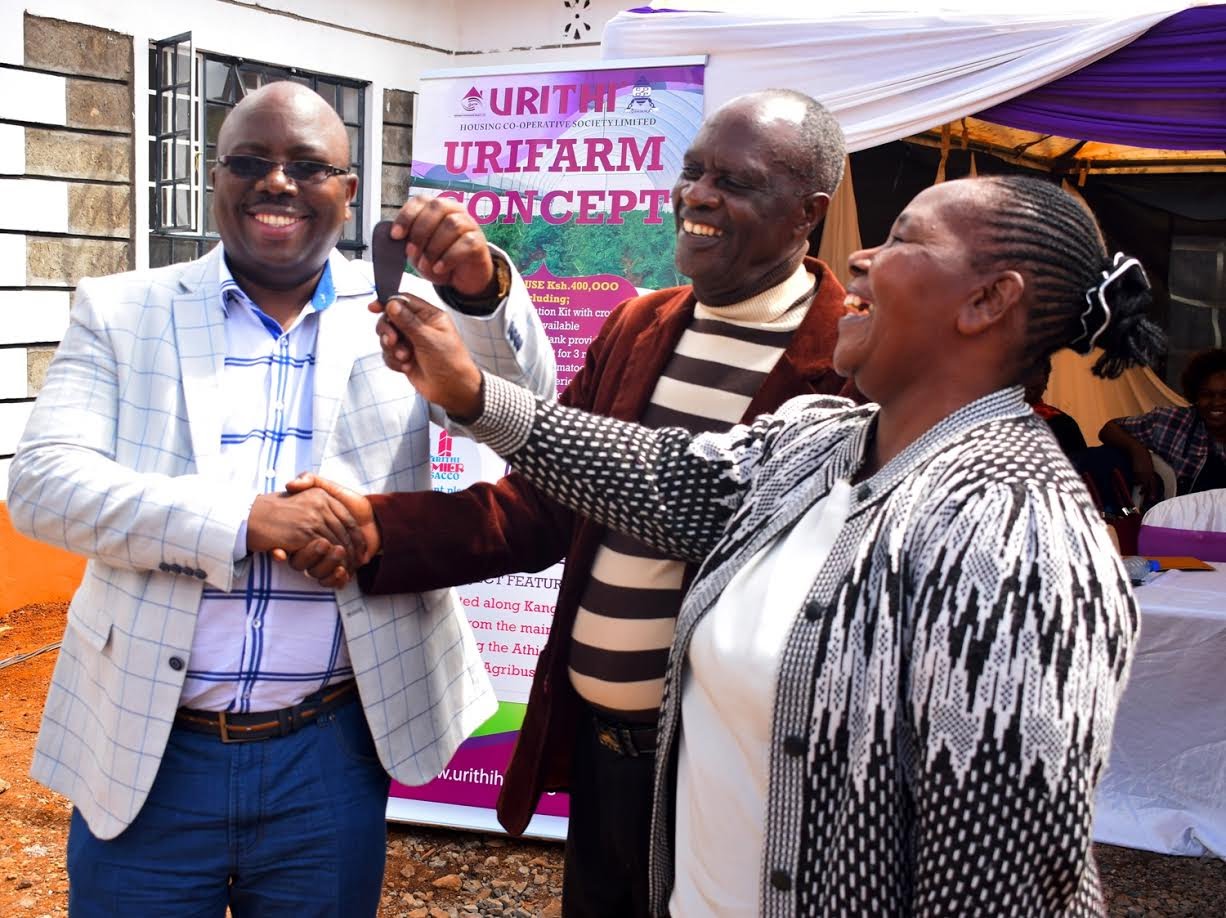 Urithi Housing Cooperative Society Chairman Samuel Maina handing over the keys to the new owners of one of the houses during the handing over ceremony of Springs View gated community estate in Gatuanyaga Location of Thika East in Kiambu County.

Since President Uhuru Kenyatta unveiled his Big Four Agenda during his inauguration to serve his second term in office, the different sectors that anchor his legacy have been making all necessary alignments to fit into the presidential vision which can only be achieved through collaboration between public and private sector players.

One of the pillars of President Kenyatta’s legacy is affordable housing, with a target of 500,000 new housing units per year.

Opinions and commentaries have been penned but what has stood out is the many experts who have made a strong case that the projected numbers can only be achieved if stakeholders would embrace the socio-economic model of housing provision.

Legend supports this narrative yet fact is that it is not exclusively dependent on this model but that this will largely drive the realization of this pillar. So what is the socio-economic model of housing, how does it work and does any of the current players in property business operate on this model?

The model is entirely dependent on members, whose contributions are key and vital in initiating and executing any project that seeks to provide housing, be it public or private. Upon payment of a pre-determined deposit or down payment, the balance of the cost is spread out and paid over a period of between 12 and 48 months.

Samwel Maina, the Chairman of Urithi Housing Society, the only player that operates on this model, says monthly subscriptions vary from one member to the other depending on their economic ability.

“For the project timelines to be achieved, also entirely depends on the speed of members to make their contributions. However, slow remittance by some members has contributed to delays being experienced as most times the society has to move with the speed of the slowest member in payment,” he says.

“Speed is determined by how fast you get money from members. But due to the uncertainty and unpredictable nature of contributions and cash flows we adjust accordingly.”

The pricing does not change over time “simply because the model mitigates on cost of labor, land and materials. Hence making it affordable without changing the initial price.”

Being an off plan project, there are critical steps, approvals and mandatory procedures that must be undertaken. Market sounding is the first of the many steps and acts a notice of the intention to undertake the project.

Then follows mobilization which entails recruiting members and other stakeholders, which process is followed by pursuit of statutory and other approvals by various government bodies, both national and county level.

Once the necessary approvals have been granted, the groundbreaking marks the beginning of construction work, whose completion is entirely dependent on members’ fidelity to make subscriptions.

“There are incidents where a member pays their subscriptions in full and expect that they would get their units but the principle here is that we pool together to own together.

“The explanation is very simple. While you may have paid yours in full, the model works in such a way that those who pay upfront help kick-start the project and sustain it by making the first commitment which is key to property ownership and the subsequent subscriptions take us through to the tail end,” adds Mr. Maina.

Urithi has over the past six years, completed and handed over thousands of housing units in Springviews in Thika, Plainsview in Juja, Gem1 in Witeithie and Lanet Homes (Nakuru and Juja).

They intend to complete and hand over all housing projects currently under construction in the next 12 months. They include Utange – Mombasa, Gem2 and Rongai Homes which are set for completion in the next quarter for handing over to the members, while investors in the Osteen Terrace Gardens will be delivered by the last quarter of 2019.

“The OTG project is the first-of-its-kind to enable us achieve affordable housing for our members and we are using the socio-economic model. This particular project [OTG] is very timely and it will hugely compliment the government’s efforts in attaining the big 4 agenda – the housing component, by engaging other stakeholders like us,” adds the Urithi boss.

Under the affordable housing pillar, the government through the National Housing Corporation and collaboration with private sector players, intends to construct 500,000 units annually by using innovative construction methods and low cost building and construction materials.

“The government will achieve its dream fast if they partner with the saccos and cooperatives. Cooperatives and Saccos have structures, a wide geographical reach and most importantly members,” avers Mr. Maina, who believes affordable housing is a major milestone towards achieving the other three pillars of President Kenyatta’s legacy plan.

Kenya Insights allows guest blogging, if you want to be published on Kenya’s most authoritative and accurate blog, have an expose, news TIPS, story angles, human interest stories, drop us an email on [email protected] or via Telegram
Related Content:  State Unveils New Force To Crackdown On Cyberbullies
Related Topics:
Up Next