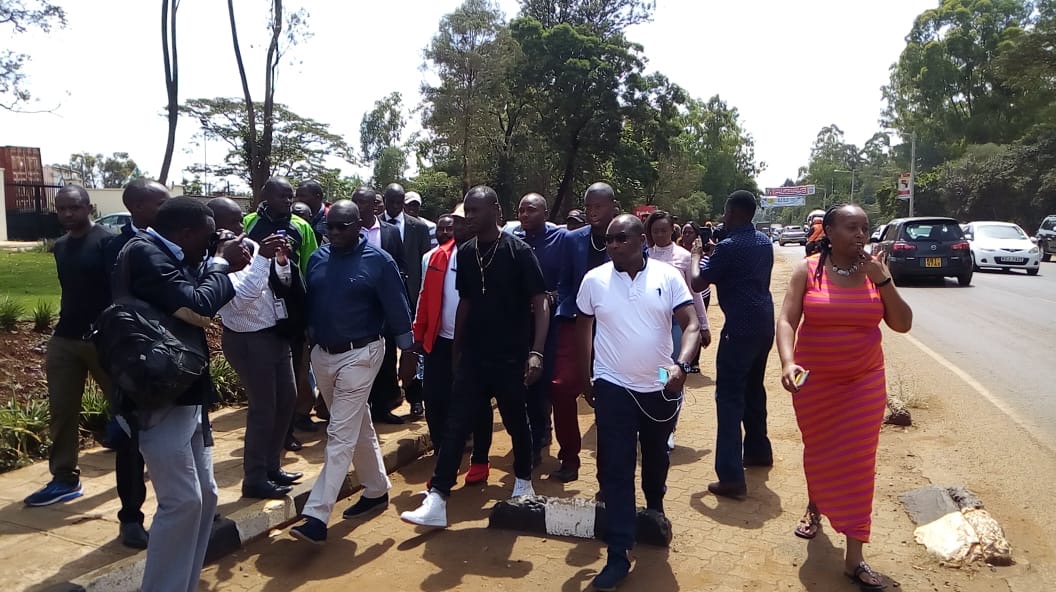 King Kaka arriving at the DCI HQ with his lawyers and supporters.

The George Kinoti-led DCI has rubbished today’s allegations that they have summoned King Kaka and termed the report as popularity stint by the rapper who has since claimed death threats on his life after releasing Wajinga Nyinyi.

I have just been summoned by The CID.

The DCI has responded to the tweet stating otherwise.

Anybody wishing for publicity should be warned to desist from using the @DCI_Kenya as platform in seeking media attention.

King Kaka painted Waiguru in his sensational song “Wajinga Nyinyi” as among the corrupt leaders in the country referring to the National Youth Scandal scandal when she was adversely mentioned which she was corruptly cleared by the Ethics and Anti-corruption Commission EACC.

In response to the song, Waiguru slapped King Kaka with a list of demands including issuing an apology and pulling down the video on all his social media platforms while Ahmednasir Abdulahi said he will represent KAKA.

I said and I repeat..I will give legal representation to @RabbitTheKing against ANYONE who sues him for the lyric #Wajinganyiyi .I'm of the considered view that no one amongst the ruling elites or the masses was defamed. UGLY, CRASS and LEWD commentaries on soceity are PRIVILEGED

King Kaka already had showed up at the DCI HQ flanked by lawyers, colleagues and Kenyans who showed up. It’s unclear as to who’s saying the truth as there are also possibilities that the agency could’ve had a second thought and reconsidered the decision following the outage the news caused and number of people who turned out to the DCI in solidarity with the musician. The song is doing well for Kaka’s numbers that’s why DCI theory of publicity stunt can’t be refuted.

King Kaka has also released a Statement to

“DCI Kenya The Number that called us claiming to be CID is +254 746 541 000 , and threatened us saying they know our whereabouts, ‘it’s either you come to us or we come for you because where you live’ . Officer Onyancha and said Room 304. Please investigate.”

Kenya Insights allows guest blogging, if you want to be published on Kenya’s most authoritative and accurate blog, have an expose, news TIPS, story angles, human interest stories, drop us an email on [email protected] or via Telegram
Related Topics:king kaka
Up Next