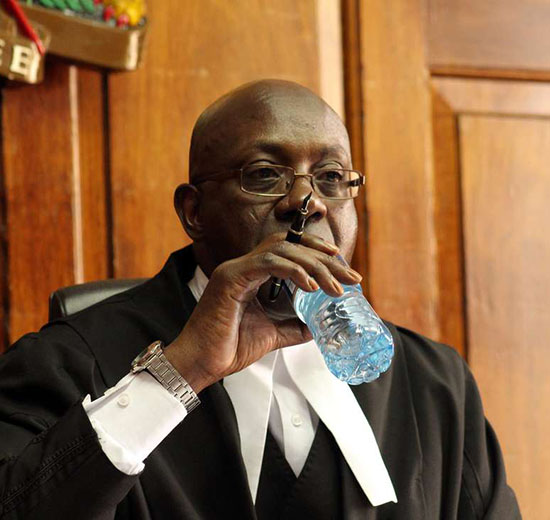 The family through Cohen’s sister Gabriel Hannah Van Straten further wants the petition heard expeditiously to ensure the judge is removed or he resigns voluntarily for violation of judicial code of conduct.

Through lawyers Danstan Omari, Cliff Ombetta and Shadrack Wambui, the family told journalist at Milimani law courts that Justice Sankale forged government documents which were used to transfer shares from Silas Itaa to himself and later to Cohen’s widow Sarah Wairimu Kamotho.

At the same time, Wairimu has sought to join a petition filed by Justice Sankale, seeking to bar the police from arresting and charging him over the murder of the tycoon. Wairimu says she has been adversely mentioned in the petition, necessitating her to participate in the proceedings.

In the petition before JSC, Gabriel accuses Justice Sankale of engaging in acts that breach public trust and consistently demeaning the dignity of his office and dishonor to the Nation.

“Clause 7 (14) of the Judicial Code of Conduct and Ethics (Legal Notice No. 132 of 2016) provides that “a judge not practice law by offering legal advice or drafting pleadings for litigants or members of the public, whether for a free or free of charge while the holder of a judicial office.” The petition states.

“I believe the action of the judge to draft the witnesses statement for the accused person, Sarah Wairimu as evidenced by their email correspondence is a breach of the above clause and should occasion the removal of the judge,” she says.

Related Content:  Man Receives Sh40,000 Mistakenly Sent To Him Via M-Pesa, What He Did Next Was Unexpected Honesty has become

She adds that in further breach of the said Clause and further demonstration of the gross misconduct on the part of the judge, Justice Sankale allegedly admits, in his statement to the DCI, that he hosted his lover, Wairimu, in his official chambers at Nyeri in February or March 2019.

It is alleged that they discussed an active divorce case filed by her late brother at Milimani Law Courts, Divorce case No. 35 of 2019.

She adds that the action is breach of Clause 5(5) that bars the judge from making comments on a matter that is likely to come before him.

Gabriel claims that exactly a week after the heinous murder of her brother, the Judge purchased an air ticket for Wairimu to travel to Kisumu ostensibly to scheme a cover-up of their alleged involvement in the murder.

Wairimu is charged alongside businessman Peter Karanja with the murder of Cohen.In documents filed before JSC, Gabriel claims that the DCI has since forensically placed the Judge at the scene of murder of her brother.

“The report filed by the DCI clearly demonstrates that the Judge actively participated in the planning and the attempts of cover-up of the murder of my brother,” she states in the petition.

The sister further claims that the Judge facilitated Wairimu to travel from Kisumu airport to Acacia hotel where they stayed by arranging her travel using his official Judiciary vehicle and official driver contrary to the government directives that official government vehicles should be used for official functions only.

She claims that the Judge also embarked on a mission to destroy evidence of their involvement in the murder between July 20 and August 28 via WhatsApp calls, phone calls and meetings planned.

Further, it is her argument she petition pointed out how the judge assisted Wairimu to draft a statement after the death of Cohen and the same statement was forwarded to the DCI and the DPP.

The lawyers argued that the Judge is being protected by the DPP after the DCI recommended that he be charged with the offense of murder.

The family wants JSC and PSC to give timelines and expedite the hearing of two petitions, which seek the removal of DPP and Justice Sankale, respectively, from office.

Kenya Insights allows guest blogging, if you want to be published on Kenya’s most authoritative and accurate blog, have an expose, news TIPS, story angles, human interest stories, drop us an email on [email protected] or via Telegram
Related Topics:Court oof AppealJudge Sankale ole Kantai.Sarah WairimuTob Cohen
Up Next