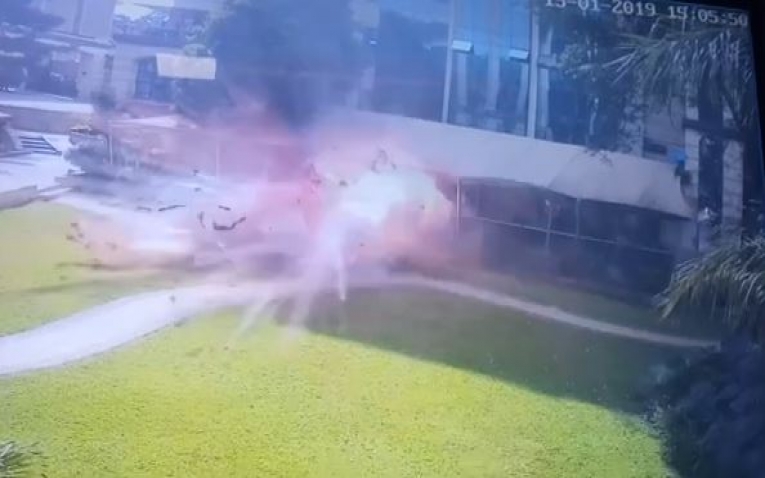 Moment Mahir then Dusit suicide bomber blew himself up.

Mahir Khalid Riziki was the suicide bomber who blew himself up at the Dusit hotel attack by terror group Al Shabaab in Nairobi that left 21 civilians dead.

In a rare CCTV footage that has been doing rounds, the attacker can be seen walking and standing strategically outside Secret Garden Restaurant While in communication with his colleagues who were on standby before blowing himself up and body parts seem flying away.

What had many people wondering is to how much one has to be radicalized to the point of offering themselves as suicide bomber. Mahir can be seen in the video looking a bit nervous seconds before the explosion pointing at a fact that he must have been hit with reality of a painful death.

Just how did it get Mahir to get from attending madrasa at Musa mosque to killing security officials before eventually escaping to Somalia where he joined the militia group and was trained to become a suicide bomber since 2016 and only crossed over to Kenya for his final mission.

In a post Dusit attack interview, an. Al Shabaab returnee only identified as Musa, opened up to tell what exactly happens behind the scenes that many don’t know. The terrorist groupie has been on s recruiting offensive charm mostly targeting to recruit Kenyans of non Somali decent whomeasily penetrate dragnet.

Musa told CNN that he positively identified Ali Salim Gichunge from the CCTV footages as amongst the attackers, this is perhaps is the first public evidence that links the Kenyan attacker to Somalia. Musa said Gichunge was a member of the feared Amniat, al-Shabaab’s internal security service, and that he met him in Baidoa, central Somalia, in 2012.

Musa who now leaves in fear of attacks from Al Shabaab and police, says he has survived assassination attempt when gunmen were sent from Somalia to eliminate him for disloyalty and defection. Having been in Somalia and trained, he certainly holds much intelligence on their operations. “I was shocked. When I saw the CCTV I said ‘I know that guy!'” Musa told CNN in an exclusive interview. 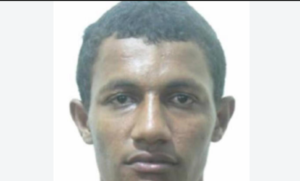 According to Musa, many of the most radicalized al-Shabaab volunteers were fighters who had converted from Christianity, he added, including Gichunge.

He reveals that on joining the terrorists camps in Somalia, one is subjected to thorough interrogation, in his instance, he says Gichunge was amongst them. “They’ll eat with you but they are just interrogating you: ‘How do you love al-Shabaab? How did you come here? Why did you join al-Shabaab?’ Those who fail to pass this phase are jailed for months if lucky or worse like getting killed.

Musa’s experiences reveal the extent to which “brainwashing” by al-Shabaab continues after volunteers have been smuggled into Somalia and offers a rare insight into the methods the terror group uses to instill absolute loyalty among its followers.

Speaking in a secret location in Nairobi with CNN, Musa said he had taken part in the decapitation of a prisoner of war.

He was part of group that took turns with a knife to saw at the neck of the victim — a tactic used by the terror group to ensure everyone’s involved in the crime.

“That’s part of the brainwashing,” he said. “They told us it’s part of the training.” He said he was then ordered to “surround the head, kick it like football and pass it to another person.” Basic military training is reinforced by involuntary collusion in atrocities.”It’s to reduce fear in you,” he added.

Musa told CNN that suicide bombers go through a rigorous selection process. New recruits are asked explicitly if they want to volunteer to “blow yourself up.” Those selected are then taken away from the main group and indoctrinated for at least a year with daily Quranic studies, lectures by a “sheikh,” and intense physical and military training.

While in Somalia, he met fighters from several western countries as USA, Britain and Australia with most of them totally brainwashed and praying for their days to be offered permission to return to their homes and launch attacks.

The former al-Shabaab fighter had a grim warning.