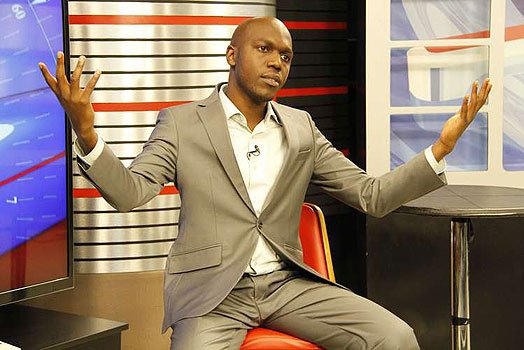 In what started as a normal tweet several months ago with Blogger Cyprian Nyakundi asking for an apology and withdrawal of statement from TV Presenter Larry Madowo following a publication on his Daily Nation column and blog post linking him to an extortion racket, things have grown to nearly unmanageable heights.

Madowo had tainted Nyakundi’s image as an extortionist following an audio clip that was floated around by blogs. In the audio that has since been cannibalized by the truth, Nyakundi was approached by Bidco with a bribery motive to keep silence on exposing dirty dealings within the Vimal Sha’s owned empire.
Larry ran with the story only for the truth to come months later in yet another exposing audio clip where the PR Head for Vimal is heard apologizing to the contact blogger and Xtiandela for having manipulated the audio leaked previously knowing the initial intent. But that’s beside the story.

Nyakundi as sued Madowo for defamation, and he had the bulk of task to prove that Nyakundi had attempted to extort Bidco and heavier that his accusations on Bidco’s malpractices in Uganda were wrong. Luckily for Madowo he scooped a corporate and high riding lawyer Donald Kipkorir while all indications were he was being sponsored by Bidco. Don’t get me wrong but facts will remain facts, Madowo with his NTV money can’t afford DBK lest he turns to the streets begging, but that’s just a punchline, truth, though.

Madowo had been unable to prove the allegations and had continuously disobeyed court orders against speaking on the matter outside court. Madowo has openly talked about the issue on his social media pages forcing the blogger to push for a contempt of court file against him.

The High Court has today ruled for Nyakundi with Madowo slapped with a possible jail term and heavy fine as compensation to Nyakundi who claim Madowo has severely damaged his good reputation that he’s built over a long time. In the initial stages when Nyakundi threatened to sue Madowo he laughed it off telling the blogger to take a loan for the bruising legal battle ahead. Now that that tables have flipped, Madowo could be on his way to Faulu Bank to beg for a loan.

Bidco has been disowned by UNDP after investigations on their operations in Uganda.UNDP found the company to have engaged in gross environmental damages, abuse of human rights and by associating they’d put their reputation in a line leading to the sidelining. Coincidentally, it’s over the same issues that Madowo has to prove Nyakundi lied about, talk about ramming into the wall.

Madowo is expected to personally appear before the courts on 16th Dec where the judge will make the definitive ruling on the civil jail and fine.

Good Riddance As KTN Cancels Jeff Koinange Live Show; Why The Decision Was Made