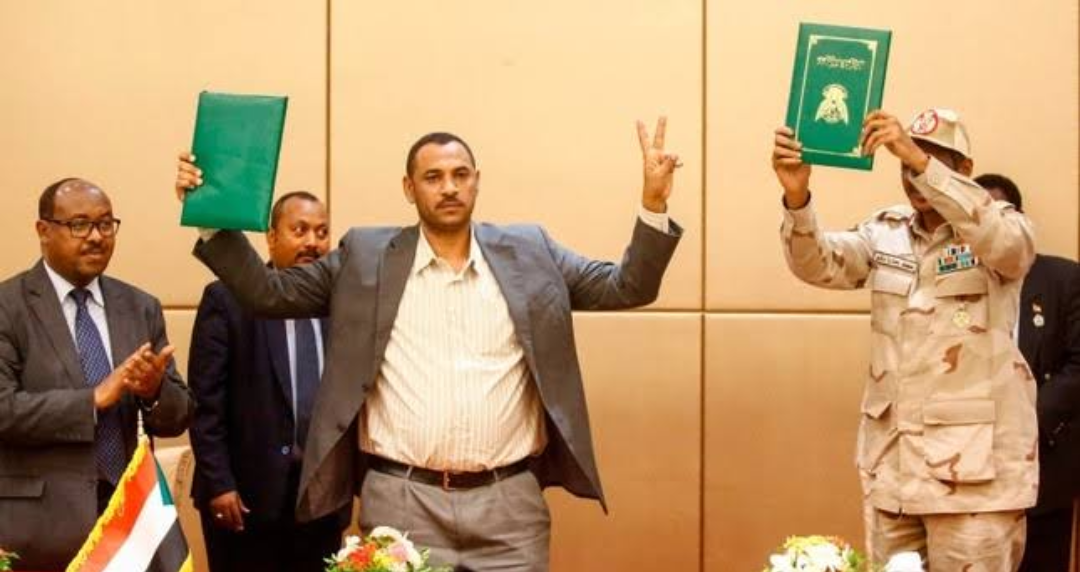 Sudan military rulers and the main opposition coalition initialed a constitutional declaration on Sunday, at a ceremony attended by African Union and Ethiopian mediators.

Under the agreement, signed at a ceremony in the capital Khartoum, a joint civilian-military ruling body will oversee the formation of a civilian government and parliament to govern for a three-year transition period.

The declaration was the result of fraught negotiations between the leaders of mass protests, which erupted last December against the three-decade rule of president Omar al-Bashir, and the generals who ousted him in April.

The parties are expected to put their final signatures on the agreement on Aug. 17 at a ceremony in Khartoum attended by foreign leaders.

Aug 17th is the same day Omar Bashir will be put on trial on massive corruption and abuse of power charges.

The next day, the generals and protest leaders are to announce the composition of the new transitional civilian-majority ruling council, Abu al-Maali said.

The prime minister will be named on August 20 and cabinet members on August 28, he said, adding that the sovereign council and cabinet would meet for the first time on September 1.

Treaty talks had been repeatedly interrupted by deadly violence against demonstrators who have kept up rallies for civilian rule.

Talks were suspended for weeks after men in military uniform broke up a long-running protest camp outside army headquarters in Khartoum on June 3, killing at least 127 people.

The movement has laid most of the blame on the powerful Rapid Support Forces (RSF) paramilitary group, commanded by Daglo.

Protest leaders stated that their calls for an investigation into protest-related violence still stands.

According to doctors linked to civilian protesters, the violence has directly affected more than 250 lives since December.

The same RSF is set to be integrated into Army’s chain of command as per Sunday’s deal.

Daglo on his speech, he avoided commenting on the unfortunate violence stating that they have turned a tough page of Sudan’s history by signing the agreement.

Dagalo, popularly known as Hemedti, commands the paramilitary Rapid Support Forces, some of whose members have been accused of involvement in killing demonstrators who have repeatedly turned out in huge numbers to press for political progress.

The agreement has received positive feedback from Members of the protest umbrella group, the Alliance for Freedom and Change, of which, their members broke into tears as they exchanged hugs.

Protesters and jubilant Sudanese gathered outside the hall, where the agreement was signed, chanting “blood for blood, our government is civilian” and “revolution, revolution”.

Despite the optimism, some have cautioned that it is still too early to tell how events will unfold in the lengthy transition period required to prepare for elections after three decades of autocratic rule under Bashir.

“It is not the first time that Sudan signed some sort of agreement to resolve very difficult political questions. I think if there is reason for optimism, the reason is not in the negotiation rooms, the reason is in this popular movement that doesn’t want to go away,” said Magdi el-Gizouli, a Sudanese academic

Ethiopian mediator Mahmoud Dirir said the agreement will establish civilian and democratic rule that will build a state of law, a state of equality and a state which does not marginalize its citizens.

Sudan’s neighbors and close allies also welcomed the agreement with amongst others, Egypt, Saudi Arabia and the United Arab Emirates leaders commenting on the same.

Egypt said it was “a significant step on the right track”, while the Saudi foreign ministry welcomed it as “a quantum leap that will transition Sudan to stability and security”.

In the United Arab Emirates, minister of state for foreign affairs Anwar Gargash said Sudan’s transition to civilian rule “turns the page” on Bashir and his Islamist allies.

On Sunday, Ethiopian mediator Mahmoud Drir told reporters the deal would see Sudan removed from the United States’ blacklist as a state sponsor of terrorism.

The country has been on the State Department’s list since 1993 over its alleged support of Islamist militants, a designation that has damaged the country’s economy and severely impeded foreign investment

Kenya Insights allows guest blogging, if you want to be published on Kenya’s most authoritative and accurate blog, have an expose, news TIPS, story angles, human interest stories, drop us an email on [email protected] or via Telegram
Related Topics:Sudan
Up Next