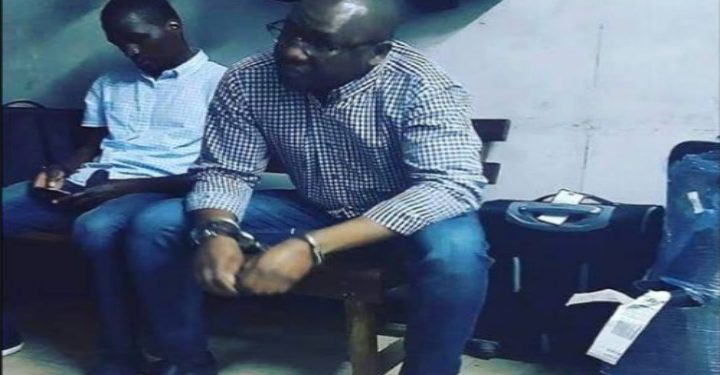 Andrew Kipkemboi being interrogated at the Jomo Kenyatta International Airport after he was intercepted with Sh227 million in US dollars last Thursday.

The High Court yesterday ordered the freezing of Sh227 million that was recovered from a man associated with Deputy President William Ruto’s United Democratic Alliance (UDA).

Monies in US dollars were intercepted from one Andrew Kipkemboi at the Jomo Kenyatta International Airport cargo shipping point as he arrived in the country from Bujumbura, Burundi, last Thursday.

The DP’s office has since distanced itself from the man who is said to be eyeing the Chesumei parliamentary seat in Nandi County on a UDA ticket.

UDA party office also denied knowledge of the man, insisting the party is yet to go through the list of all individuals who have declared interest for parliamentary seats on its ticket.

“He may have declared interest for the parliamentary seat, but is yet to submit his application to the party. We don’t have his details at all,” Wanjohi Githae, the UDA spokesman, said.

Yesterday, the Anti-Corruption and Economic Crimes Division judge Esther Maina ordered the money recovered from Kipkemboi, who is an agent of two firms, Brinks Global Service-Kenya and Brinks Kenya Limited, to be deposited in the Assets Recovery Agency (ARA) preservation account at the Kenya Commercial Bank.

“An order of preservation and seizure of $2 million found in possession of Brinks Global Service Kenya and Brinks Kenya Limited be deposited in the Assets Recovery Agency preservation USD account held at Kenya Commercial Bank. The order shall remain in force for 90 days,” Justice Maina ruled.

ARA sought orders to preserve the funds intercepted by the Kenya Revenue Authority (KRA) Customs officers on grounds they could be proceeds of crime, obtained from a complex money laundering web.

Through lawyer Adow Mohamed, ARA informed the court that on February 15, 2022, Customs and Border Control while undertaking normal clearance procedures at the Jomo Kenyatta International Airport noted an export entry. The entry had been lodged to export currency amounting to $2 million from Kenya to the UK.

The consignor was indicated as Brinks Kenya Limited while the consignee was Brinks Global Services UK but declared as exiting Kenya.

The agency added that the funds originated from Bujumbura destined to Kenya but was intercepted being reshipped to the UK without any declaration, raising reasonable suspicion of money laundering.

“We established that the respondents, while attempting to send the funds to London, UK, indicated that the origin of the funds in Kenya and concealed its origin which was Bujumbura, Burundi,” said the agency.

In an affidavit, Fredrick Musyoki, an officer attached to the agency, said that on Tuesday last week, together with his co-investigators Isaac Naikatare and Daniel Leyian, they recorded a statement of one Kipkemboi who is said to be an agent of Brinks Global Service-Kenya and Brinks Kenya Limited. The two companies have been listed as respondents in the case.

“Investigations established that the agent of the two firms, one Andrew Kipkemboi, declared the said cash on arrival from Bujumbura with Kenya as its destination and left with the same through the passenger arrivals terminal,” the officer informed the court.

Musyoki tabled in court a statement recorded from Kipkemboi which stated that he was in 2014 approached by a person known to him by the name Gikonyo Mwangi who asked him whether he could join his company, Brinks Global Services.

Kipkemboi accepted the job offer at Brinks Global Services where he got employed as the branch administrator.

He said he has made trips to Bujumbura on five occasions to collect banknotes amounting to $2 million per trip.

Kipkemboi further states that he made four trips to Bujumbura in 2021 in January, February, October and December.

The last trip to Bujumbura was on February 15, 2022, where he collected banknotes amounting to $2 million and came with the same to Kenya, the statement stated.