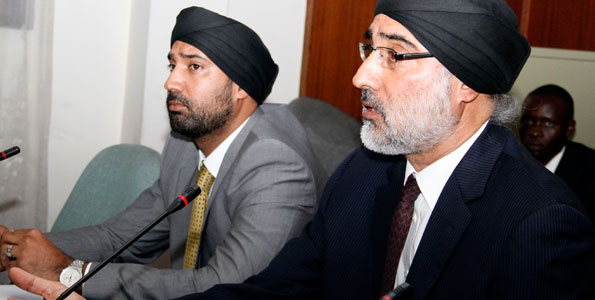 In January 2017, a lavish wedding between Gavneet Chatthe and Rajbir Rai was celebrated at the Sarova Mara Game Camp within Maasai Mara.

Clearly, the Rai Family enjoys a cordial relationship with the DP. He, however, is neither the first nor the only one. The family has enjoyed close association with the Daniel Moi, Mwai Kibaki and Uhuru Kenyatta governments for over four decades, and has reaped handsomely from the resultant political patronage.

The Family – made up of patriarch Tarlochan Sigh Rai (deceased), his wife Sarjit Kaur, and sons Jaswant Rai, Jasbir Rai, Iqbal Rai and Daljit Kaur Hans – came into prominence when Tarlochan bought off large tea and coffee estates from Belgians fleeing then Belgian Congo – now Democratic Republic of Congo – in the 1960s.

He built a fortune and entered Kenya by partnering with a fellow Asian to produce chests for their coffee and tea in Eldoret in the 1970s.

To say the family has greatly benefitted from political patronage in the sugar, wood, cooking oil and soap manufacturing businesses is understatement; it owns and dominates these sectors.

The Rai family has cultivated an appetite for affiliation to prominent politicians for since 1993 when Raiply partnered with Nicholas Biwott and former President Moi after the brutal murder of its previous partner Shabir and his wife in Eldoret. 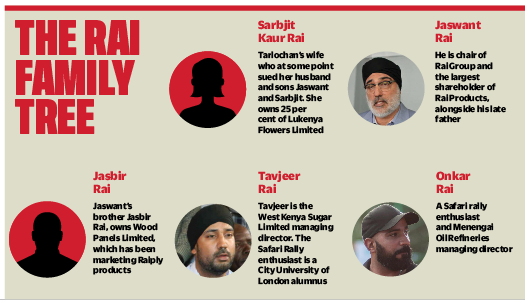 The biggest manifestation of the industrialist family’s reach in the Jubilee government came with the acquisition of Kenya’s only paper mill, Pan Paper Mills in Webuye, at the chickenfeed price of 900 million shillings

Following this partnership, Rai, who came to Kenya in 1971 from Uganda after the expulsion of Asians from the country by the then President Idi Amin, began enjoying concessions in the excision of Mt Elgon Forest, where they cultivate hard wood trees for the Eldoret-based wood processing industry.

Related Content:  Court Allows For The Liquidation Of Savannah Cement

So beneficial was the partnership with Moi and Biwott that Rai’s family business quickly expanded from timber to sugar as they continued to enjoy political benefaction, courtesy of the elder Rai’s collusions.

Kabarak Limited, for instance, is associated with Moi owns 1.4 per cent of Raiply, and has continued to get licences to log indigenous hardwood, according to a report recently released by the Jubilee government-appointed task force of forest destruction.

It is during the partnership with Biwott and Moi that Raiply earned the license to log protected public forests, which it did with wanton promiscuity.

But the biggest manifestation of the industrialist family’s reach in the Jubilee government came with the acquisition of Kenya’s only paper mill, Pan Paper Mills, Webuye, at the chickenfeed price of 900 million shillings. The last audit value of the Mills, done in 2016, was Sh19 billion.

The receiver managers in charge during the second bail out of the mill – which was a joint venture between the government and an Indian investor – confessed that the presence of powerful manipulation led to the cheap sale of the mill’s assets to the Rais; Sh900 million is less than what was injected in at the last bailout.

The purchase gave the Rai family and their backers a whooping Sh18 billion payday in assets for a Sh900 million investment. Given its history, it’s all in a day’s work.

Two of the Rai brothers, Sarbjit and Jasbir, following family disputes, have since established Nile Plywoods (Uganda) Limited and Poly pack Limited in Uganda, where they equally enjoy more than cordial ties with President Museveni. The two also have a 25 per cent shareholding in Lukenya Flowers Limited.

The family also has substantial investment in India that at one time led to protests by family members against Tarlochan over the millions of shillings invested in the Asian country.

Jasbir once accused Jaswant of diverting Sh100 million from the family’s Standard Chartered Bank account, Eldoret Branch, to Kenya Commercial Finance Company in Nairobi without the involving the rest of the family consent.

The matter was reported to police by Tarlochan and Jasbir was later paid Sh46 million before he and Sarbjit moved to Uganda, where they then established PolyPack Limited with a Ksh350 million capital investment equally owned by Jasbir and Sarbjit, and Nile Plywoods (U) Limited with US$ 2.5 million, with a joint 45 per cent shareholding.

Sarbjit would later buy out Karim Hirji’s 51 per cent shareholding after obtaining Ksh180 million from his father.

When the crackdown on sugar smuggling barons began in the country, it was Leader of Majority in the National Assembly Aden Duale, in a statement to parliament, who linked the Rai family to the importation of 187 million kilogrammes of sugar during the duty free period allowed by the government, but which had been contaminated by copper and mercury due to poor handling.

Tellingly, it is former Kakamega senator Bonny Khalwale who came to the defence of the Rais – with the weedy assertion that some barons wanted to close down West Kenya Sugar factory.

The family’s appearance before a parliamentary committee for ‘grilling over the saga turned out to be a tragic farce where committee members displayed rare carnal excitement at being close to such a immersing figure as Jaswant. It evoked thoughts of “birds of a feather”.

Reportedly, an MP from Western Kenya had come in with fat wads of cash on behalf of the Family, which he had distributed amongst the committee members prior to the meeting.

Kenya Insights allows guest blogging, if you want to be published on Kenya’s most authoritative and accurate blog, have an expose, news TIPS, story angles, human interest stories, drop us an email on tips.kenyainsights@gmail.com or via Telegram
Related Topics:Jaswant RaiRai family
Up Next