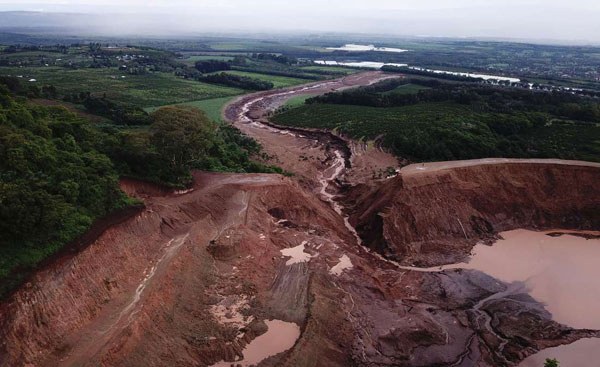 The State is seeking Sh7.7 billion from Heritage Insurance and Standard Chartered Bank for insurance guarantees paid for the controversial Arror and Kimwarer dams.

Standard Chartered Bank and Heritage Insurance have been dragged in the Sh65billion Arror and Kimwarer Dam scandal as the government moves in seeking compensation from the Sh7.7billion insurances guarantees paid for the controversial flopped projects.

The government is demanding Sh4.1 billion from Heritage Insurance and an additional Sh3.6 billion from Standard Chartered Bank.

In what now plays out to have been a well-orchestrated scheme to have the ambitious projects collapse from the word go, Deputy President William Ruto said the government would not lose any money since the projects are insured after discounting that only Sh7billion was lost and not the Sh21billion as indicated.

If the two dams were constructed successfully, the largely semi-arid Kerio-Valley region would have adequate agricultural water for irrigation and human consumption.

Regional Development Principal Secretary Belio Kipsang said the government would seek another Sh3.6 billion from Standard Chartered Bank for the Kimwarer Dam ahead of the expiry of the guarantee in June next year.

The payments akin to the performance bond are due to the failure to construct the two dams by Italian construction company CMC di Ravenna, which was paid billions of shillings and has since filed for bankruptcy.

CMC di Ravenna is at the centre of a corruption scandal involving the two envisioned dams that now remain imaginary.

Prosecutors claim that no work had been done on the dams despite the Italian firm having won the construction contract more than five years ago, and some Sh19 billion having been paid out by the National Treasury in connection with the projects.

“I can confirm that the Treasury has recalled Sh4.1 billion guarantee for Arror dam project. I cannot, however, confirm whether the money has hit the Treasury accounts,” said Kipsang

“Heritage Insurance had guaranteed that if there is non-performance on the part of the contractor, they will give us the advance payment.” He added.

Evidence presented in court showed that CMC Di Ravenna-Itinera JV received Sh4.3 billion on September 27, 2018, as an advance payment for Arror dam and Kimwarer, an advanced payment of Sh3.5 billion was approved on July 2, 2018.

Another Sh11 billion offshore payment was made to Italy’s SACE Insurance.

Kipsang submitted that the Standard Chartered payout is linked to the advance payment made to the Italian contractor for the Kimwarer dam.

“We will be recalling the insurance guarantee from Standard Chartered Bank before it expires in June 2023.” He said.

In 2019, StanChart was implicated into money laundering claims of the Arror and Kimwarer dams amounting to Sh734.5million.

The money in question, suspected to be related to the scandal was consequently frozen by a Nairobi court.

Investigations show the money belonged to Stanlib Wealth Amanah Property Limited which was flagged by the Directorate of Criminal Investigations for alleged money laundering.

According to court documents the account holders made application to the bank to transfer the sh734.5 Million to Azepco general trading company limited in Dubai a company that is suspected to be linked to the Dam scandal on 24th July the same year.

Kenyan taxpayers could pay up to Sh80 billion to the Italian firm contracted to build the Kimwarer and Arror Dams.

This is if an arbitration court rules in favour of CMC Di Ravenna.

It is seeking compensation for the irregular cancellation of the contract through an arbitration case at the International Chamber of Commerce.

In the case, the contractor wants the tribunal to rule that the government, through the KVDA, cancelled the contract irregularly, abnormally and in an unlawful way.

It reckons KVDA is liable for the delays and failures to comply with its contractual obligations.

“The situation is complicated because CMC Di Ravenna has gone to the International Court of Arbitration seeking payments. There is a standoff between us and the contractor,” the PS told the PAC.

Dr Kipsang and KVDA managing director Sammy Naporos were hard-pressed to explain how a company, which has filed for bankruptcy can seek additional pay move to arbitration to seek more payment.

“When you file for bankruptcy, how do you sue anyone? This is a conundrum,” said Rarieda MP, Otiende Amolo.

President Uhuru Kenyatta, in September 2019 cancelled the Kimwarer dam project after investigations established that it was technically and financially unfeasible.

He also issued an order for commencement of the Arror dam project at half the costs as the technical committee he appointed to look into the developments found it economically viable.

Kenya has also defaulted on the Sh19.6 billion loan for the controversial Arror and Kimwarer dams having failed to make the first instalment payments to Italian Bank Intesa San Paolo in May.

Treasury documents tabled in Parliament show Kenya was to pay the first instalment for the Sh11 billion lent to the Arror dam on May 18 and the initial repayment of the Sh8.63 billion Kimwarer loan on May 9.

The Italian bank says Kenya has failed to make the payment amid investigations into the billions of shillings that were shared in foreign banks and never wired to Kenya government accounts.

“No payments have been made in 2021,” a representative of the Italian bank who did not wish to be named told the Business Daily in an earlier email response.

Records before Parliament show the Treasury is yet to make payments for loans linked to the two dams.