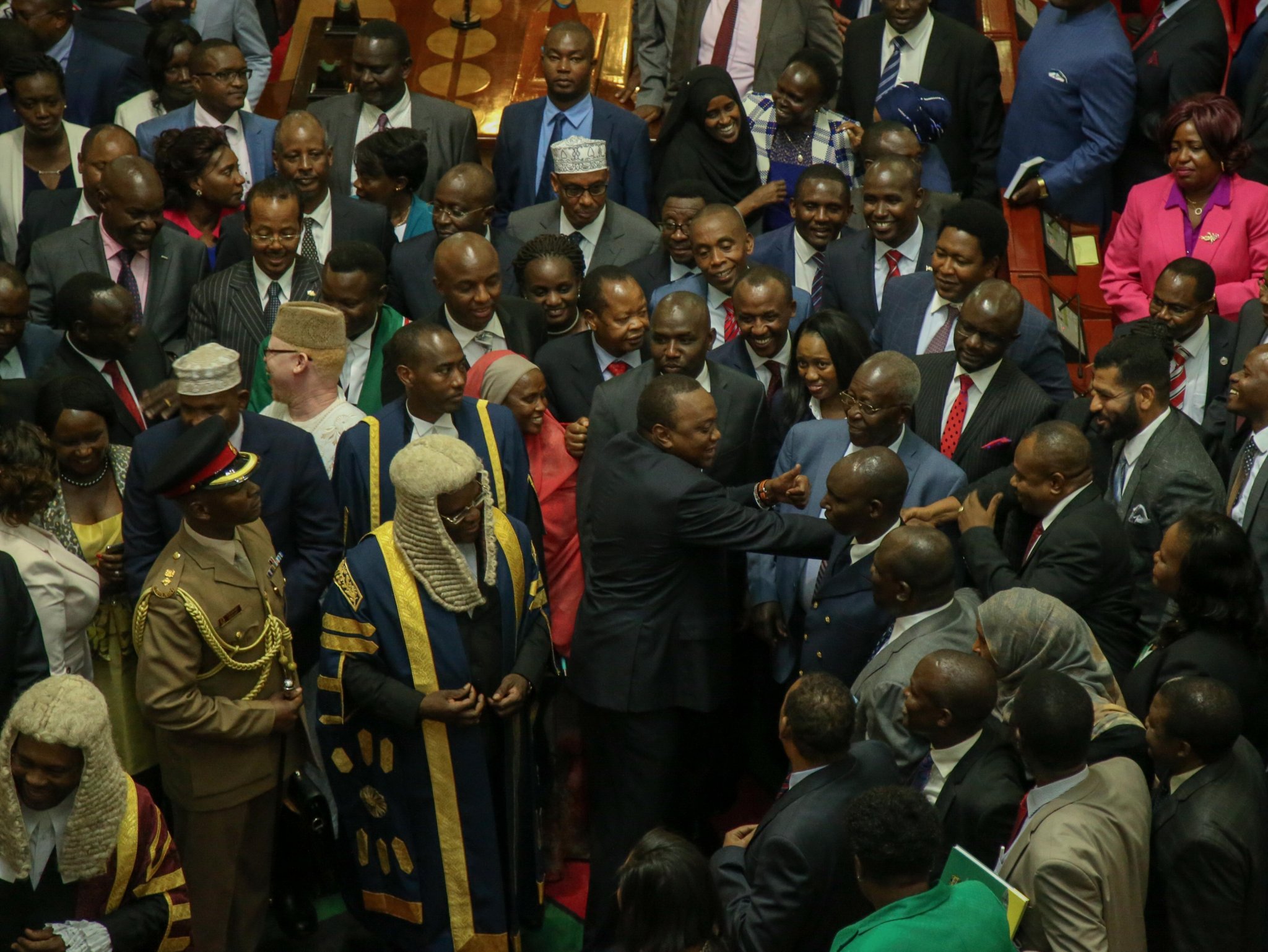 President Uhuru shaking hands with MPs after delivering his State of the Nation speech in Parliament.

Like many of the past elections, Kenya has been treated to series of violence and the 2017 election wasn’t any different. The conflicted poll was nullified in the Supreme Court and Kenyans went on a repeat poll which was boycotted by the majority of voters. Many lives were lost, many maimed from the ruthless hands of the police who reigned terror on the protesting opposition supporters.

As events would turn out, opposition’s leader Raila Odinga, ceased fire and agreed to work with President Uhuru after a long period of deadly battle. The now popular handshake was received by mixed reactions with some of Raila supporters feeling betrayed that he bowed out before delivering on what they were fighting for like electoral justice. However, many viewed the handshake positively as it brought a state of peace and tranquillity in the country.

During his address to the nation on Wednesday, the President came out in a sober mood asking Kenyans for forgiveness. We’ve been here before after the 2013 contested election when Kenyans were told to accept and move on, in that election, lives were lost as accustomed. The cynical circle is here with us once more and will continue taking rounds should Kenyans continue giving a serious issue the evident cosmetic approach.

If there was anything I said last year that hurt or wounded you, if I damaged the unity of this country in any way, I ask you to forgive me, and to join me in repairing that harm #StateOfTheNation #Big4ActionPlan #BuildingBridges

One lovable characteristic of President Uhuru is his speeches, well written and so convincing, the problem often comes in implementation. Before we forgive, we must not forget how we got here, the President in his speech, conveniently failed to mention which particular crimes he committed that he wants us to forgive. A casual way of asking for forgiveness is not going to go down well. Kenya needs genuine reconciliation, not this quicksand approach. We don’t need eruptions in 2022 but if we don’t deal all loopholes them we’re headed right to it.

Forgiveness without reparation is honestly, laughable and inconsequential. Many people lost their lives, family snatched of their loved ones and scores left with permanent scars in the post-election violence. How then do we make these people forgive? A personalized apology and compensation perhaps will do. A lot need to be changed to switch the presidency of this country from being a matter of life and death hence bloody contest every five years.

Corruption, nepotism, tribalism has been dividing this country since independence, we’ve really failed to curb it. A genuine reconciliation effort would mean we revisit the TJRC report and address all the historical justice. Without the implementation of the report, we’re merely acting on an ostrich mentality and sitting in a time bomb.

True forgiveness will not come from beautiful speeches but by genuinely addressing the historical injustices that have been the core causes of disunity and chaos in Kenya. Uhuru and Raila are in the best positions right now to deliver long-lasting solutions.

Kenyans, on their part, must report any crimes they may come across. Families must feel ashamed by one of their member becoming involved in corruption; they must insist on the upholding of their name as a family #StateOfTheNation #Big4ActionPlan #BuildingBridges

President touched on corruption, a monster that has been undoing the most. For forgiveness on what the president feigned helplessness on last year, we need to see successful prosecutions and recovery of stolen public wealth, we need to start seeing the real terror on corrupt officials, time for speeches is up, action time.

Before we rush to forgive, we must revisit how we got here, this is the only way we’re going to have a long-lasting solution, otherwise, silence shouldn’t be mistaken for peace.