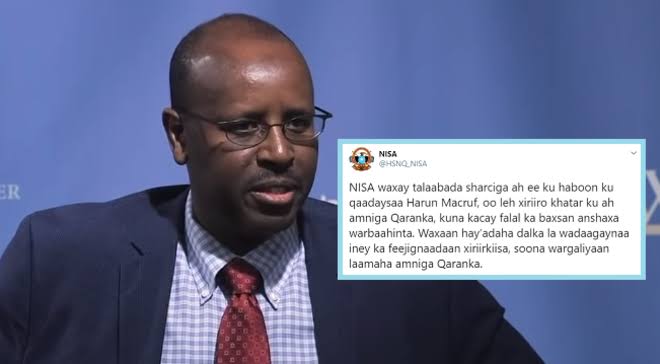 Renowned journalist and author Harun Maruf is under investigations over breach of security, Somalia’s spy agency NISA said in a tweet, threatening to take legal actions against him in the near future.

In a damning tweet that has attracted retribution from members of the public, the agency, which is coincidentally run by a former Al-Jazeera journalist Fahad Yasin, accused Maruf of having “links” that are a “threat” to national security.

Mr Maruf is a reporter with the Voice of America and in recent weeks, he started hosting a weekly show, Investigative Dossier, which might have informed the swift rebuttal from authorities.

According to the agency, the reputable reporter “commits acts outside media discipline” which could endanger the lives of millions of Somali people, adding that it contemplates taking legal action against him.

“NISA is taking appropriate legal action against Harun Macruf for having links that threaten national security,” the agency said on Thursday, adding, “He has regularly committed acts outside the jurisdictions of media discipline.”

Some of the leads the agency is purportedly investigating include the award-winning journalist’s contacts, which it claims are agents of terror and antagonism in Somalia, a country which after all considered as one of the “difficult” ground for journalists in the world.

“So we are partnering with national agencies to investigate his contacts and to inform the national security sector for appropriate legal action,” NISA said, in remarks which could reignite debate about Somalia’s respect to the freedom of media.

Besides his reporting prowess, the US-based journalist is better known for his book; Inside Al-Shabaab: The secret history of Al-Qaida’s most powerful ally, which gives a blow by blow account on the terror group.

For a decade now, Somalia has struggled to eliminate Al-Shabaab militants, who enjoy large swathes in rural central and southern Somalia. The group has killed over 4,000 civilians in East Africa.

But even before the intelligence agency takes any appropriate action, their approach has already faced severe criticism and backlash, a move which could slightly knock it off the balance.

Better known for his informative impartial pieces, Maruf has received backing from various members of the public, including veteran leaders and civil society, who terms his tribulations as “concocted lies and innuendos”.

Abdirizak Mohamed, a federal MP, accused the agency of being “ignorant” of the law, adding that “we are not a police state, nothing warrants threatening legal action against an international reporter”.

“The grim reality is that you have become an oppressive tool for the autocratic regime. Its a privilege to be interviewed by Harun Maruf,” added the MP, signalling a political angle to the matter.

And for Wadajir party leader Abdirahman Abdishakur Warsame, the statement by NISA amounts to “intimidations” and the outright war against “freedom of the press” and “independence” of media.

“It is also evidence of abuse of the power of security agencies to prevent the public from getting objective and impartial news,” Abdishakur said, in an indirect jibe against Villa Somalia.

Mohamed Moalimuu, the chairman of Somalia Journalists Association, also came into the defence of Maruf, terming him a “respected” reporter. He added that “he’s innocent until proven guilty”

The agency did not immediately reveal aspects being investigated about Maruf, who is an all-round journalist, commentating on social-economic, security and geopolitics of the country.

Fahad Yasin: A saviour or just a clown?

Maruf’s programme; Investigative Dossier involves interviewing of exclusive sources especially within the militant group, less the same thing Yasin used to do during his days in Al-Jazeera.

For instance, he has revealed cracks in the Al-Shabaab occasioned by differences between Ahmed Omar Diriye and the group’s financial controller Mahad Karate. There have been also exposing of high profile exits.

More often then not, NISA has also resorted to social media, reporting about alleged stalemate within Al-Shabaab. For instance, it reported about the exit of Muse Moalim, the Banadir district Al-Shabaab’s Amniyat, who has since been killed.

Traditionally, security forces have worked on the intelligence reports from journalists and researchers to nab criminals, something which would have been expected of Yasin and his team on Maruf’s reports.

But in Somalia, Yasin has often been accused of politicising the investigative agency to the advantage of President Mohamed Abdullahi Farmajo, who is under fire over frequent misusing of government resources including the agency.

In December, Yasin’s competence was questioned after an Al-Shabaab attack in the capital, Mogadishu, which left over 90 people dead. In a tweet, NISA claimed the raid was “planned and executed by a foreign country” although no further details were given.

However, in total contrast to his sentiments, President Farmajo, who accesses security briefing from Yasin said: “Al-Shabaab is responsible for this attack” in a statement that exposed NISA. Al-Shabaab would later take responsibility.

Yasin has also featured in outbursts by federal states, who accuse him of “misleading the president by advocating for the deployment of SNA troops in states” adding that, “such a move undermines territorial integrity”.

Jubaland has specifically questioned the presence of Somali National Army [SNA] in Gedo, citing plot by the spy agency to “overthrow” Ahmed Madobe, the president of the semi-autonomous region in the West.

Besides struggling with basic best governance practices, Somalia is, however, not synonymous with media censorship and persistent gagging of reporters perceived to be “radical”.

A report released by Amnesty International early this year dubbed “We live in perpetual fear”, the group documents incidents of assassinations, brutality, corruption and censorship targeting the media.

Both Al-Shabaab and FGS were directly implicated, although the government would later dismiss the report as “cheap” and “misleading” in what caused an uproar from among international partners of Somalia.

Incidentally, Mr Yasin’s NISA featured in the report, where it was accused of murder, intimidations and even working in cohorts with Facebook to facilitate disabling of accounts linked to “leftist” reporters.

Zakariya Mohamud Timaade, a former Universal TV reporter, had said: “The biggest fear for me was from NISA. I knew they wanted to kill me. In Mogadishu, you can hide from Al-Shabaab, but you cannot hide from NISA; they could easily pick me from my office. I decided to leave.”

Amnesty also documented examples of censorship and allegations of bribery of media outlets by the Somalia government. Officials at the Office of the President reportedly paid monthly bribes to some media owners and directors not to publish “unfavourable” stories.

Kenya Insights allows guest blogging, if you want to be published on Kenya’s most authoritative and accurate blog, have an expose, news TIPS, story angles, human interest stories, drop us an email on [email protected] or via Telegram
Related Content:  Taxman Goes After KEMSA Suppliers Who Evaded Paying Taxes
Related Topics:
Up Next

How Total Kenya Exploits, Rips Off Kenyans For Profits