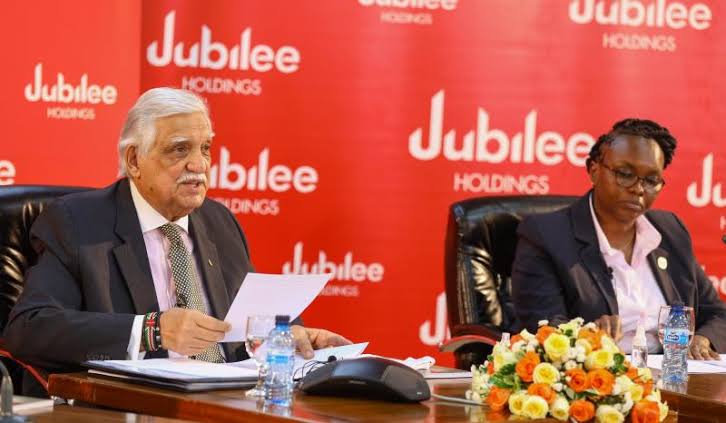 Corporate fraud has always been the biggest shareholder in driving force to corruption in Kenya. Jubilee Insurance  has spread its branches in all state parastatals and has been linked to a number of corporate fraud, that have been linked to the deputy president money-laundering sources that gases up his tanga tanga campaigns.

Jubilee Insurance company now Jubilee Allianz General Insurance Co has been directly contacting state agencies in which tender documents are prepared in favour of them. Underwriters trying to compete with them walks on a thin rope and find it next to impossible to win the tenders because usually mandatory requirements and the scope highly favour them being that they’ve the financial muscle to manipulate the authorities.

The market field hasn’t been equally leveled and Section 55 of the Public Procurement and Asset Disposal Act, 2015 has always been contravened in their favour whenever they are involved.

Most of those who understand the system, would agree with me that Corporates are the financiers of the law makers- Politicians, a mutual friendship to create connection to win state tenders, get state immunity and engage in money laundering business with the protection from the government machineries and push legislators whom they sponsor to ammend or table bills to make laws in their favor and dodge being summoned for questionings.

The decision that was made to greenlight German corporate giant Allianz to acquire Jubilee holding’s shares was a snitchy move to try refurbish the sucking public image of Jubilee company.

The transaction was Allianz’s second direct investment in the country, after establishing Allianz Insurance Company of Kenya Limited as a greenfield operation in 2014. Jubilee would continue to hold significant minority stakes in each of the operating subsidiaries, which are estimated to account for 12.3 per cent of Jubilee Holding’s consolidated net assets worth Shs1.1 trillion as at June 2021.

Global insurer and asset managers–Allianz has become the majority shareholder in Jubilee General Insurance Limited in Kenya. This follows the acquisition of a 66 per cent stake in the company, representing 1,522,622 ordinary shares, from Jubilee Holdings Limited (JHL), East Africa’s largest insurance group who are retaining a 34 per cent shareholding in the company.

The acquisition follows the execution of an agreement signed on September 29, 2020, whereby Allianz agreed to acquire the majority shareholding in the short-term general (property and casualty) insurance business operations of JHL in five countries in Africa. These are Kenya, Uganda, Tanzania, Burundi and Mauritius.

Having worked at the KWS, Julius Kipng’etich, together with some crooked KWS officials, manipulated the Ksh. 324 Million KWS Medical Insurance Tender that had to be reviewed by the  PPRA as it was marinated with fraud and would have brewed public outrage or authorities (EACC, DCI, AG) attention. 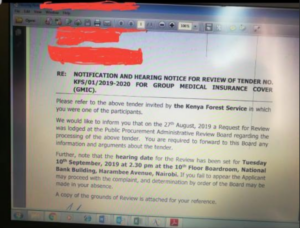 There was a hearing on the KWS tender saga on the 10th of September 2019 by the PPRA but as usual it was just for formality.

Julius Kipngetich, deputy president William Ruto’s ally has been heard on many occasions boasting of being immortal, considering his network with office of the Deputy President.

He says, “It’s in the public domain that KNH bosses have assured the agent and the underwriter who was awarded the Life Insurance business that they will handle PPRB staff and that no complaint will be successful. As of now, we are aware that CIC Life Assurance Co. Ltd have already challenged the procurement process with PPRA/Public Procurement Review Board (PPRB) and we are equally aware that KNH bosses who have their cuts already negotiated and assured are working day and night to influence the decision of the Review board, and that they are rushing to sign the contracts so that payment can be done urgently even as complaints are put every day.”

We report to you the above subject matter whereby KNH (Kenyatta National Hospital) advertised for Procurement of Insurance Underwriting Services, KNH/T/46/2021-2022 on 27th May 2021 that closed on 08/06/2021.

2. Preliminary criteria no. 13 life underwriters must have gross premiums of Kshs. 500Million for the year 2020.

The item of profitability coupled with Gross premium of Kshs. 500 Million were put as mandatory in the tender document to lock out all other Life business underwriters and only allow Jubilee Life assurance Ltd win the tender.

Section 55 of the Public Procurement and Asset Disposal Act, 2015 on eligibility to bid states that a person is eligible to bid for a contract in procurement   only if the person satisfies the following criteria:

(a) the person has the legal capacity to enter into a contract for procurement or asset disposal; (b) the person is not insolvent, in receivership, bankrupt or in the process of being wound up; (c) the person, if a member of a regulated profession, has satisfied all the professional requirements; (d) the procuring entity is not precluded from entering into the contract with the person under section 38 of this Act; (e) the person and his or her sub-contractor, if any, is not debarred from participating in procurement proceedings under Part XI of this Act;  (f) the person has fulfilled tax obligations; (g) the person has not been convicted of corrupt or fraudulent practices; and (h) is not guilty of any serious violation of fair employment laws and practices.

The two are unlawful and contravene the provisions of all the procurement, public finance and insurance laws. Eligibility of tenders is clearly and precisely outlined in the above mentioned section 55 of the procurement Act.

We would also want to bring to your attention that the same issues were raised by the KNH Tender Evaluation Committee who noticed the weirdness of their inclusion into the tender document. The committee would immediately write to the Head of Procurement requesting for guidance on how to handle them since they were very subjective and locked out all the other bidders in the Life business.

The issues raised by the evaluation committee were not responded to but instead the committee was silenced and assured of their share. Other members of the committee who tried to enquire further were intimidated and blackmailed. It’s also worth noting that we, and other insurance stakeholders raised these issues way before the tender closed.

Underwriters, also, some of whom participated and others who chose not to participate in the tender, also raised issues both in soft and in print. All those issues and queries raised were ignored and went unanswered. Negligence and lack of professionalism at the highest.

As at now, the tender has already been awarded and KNH chose to communicate to all other bidders who participated and leave out the current service provider so that they may NOT know the results and therefore fail to challenge the procurement process with the Procurement Review Board: the window of which expires tomorrow 28/06/2021.

The issues of negligence highlighted are so unfortunate and we call upon the authority and all other regulatory bodies to take the matter seriously and deal with the scam once and for all.

Thank you in advance for your consideration.”

Kenya Insights allows guest blogging, if you want to be published on Kenya’s most authoritative and accurate blog, have an expose, news TIPS, story angles, human interest stories, drop us an email on [email protected] or via Telegram
Related Topics:Jubilee insurance company
Up Next