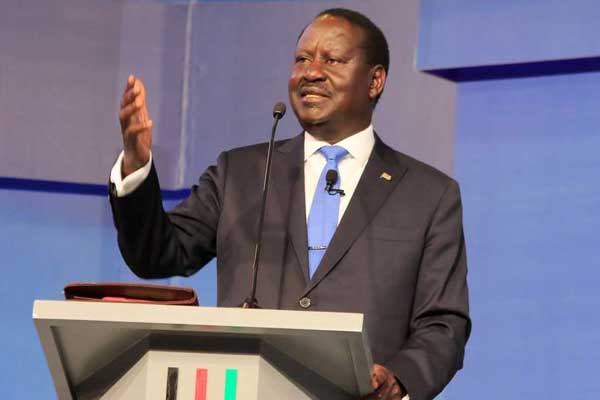 Raila Odinga on the stage during the debate

Numbers are in and an estimated number of 9Million Kenyans we’re tuned in for the grand royale battle for the two leading contenders in the presidential race but as Uhuru boycotted the show, Raila was presented with a lifetime opportunity. Free 90mins media coverage across all mainstream media spaces with close to the 9M audience. Odinga took the chance to do the right thing, convince Kenyans why he’s best suited for the job.

His show up gesture was well received by many who took it as a sign of humility, true leadership, concerned leader and respectful to the larger Kenyan masses who felt privileged to hear out his policies. Uhuru on the other end was receiving and continues to receive harsh criticism from his supporters and none. The president skipped the debate in what is clearly strategy plan from his advisers and instead hosted Samburu in the statehouse.

Being a closely contested race where the winner is too risky to bet on given latest opinion polls that put Uhuru and Raila on a neck to neck position, the debate presented an opportune platform to charm the undecided voters who average 6-8%. To Kenyans who’d made up their minds in whom to vote for, the debate was nothing but entertainment value but for the undecided, it was a decision-making moment. 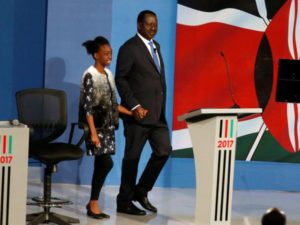 Raila enters the stage with his grand daughter

Having this in mind, Odinga seem to have come to the debate with the single strategy of appealing to the undecided voters who by the way would determine whether Kenya would have a 1st round winner or a run off which is predicted as inevitable by statisticians. Mr. Odinga took the 90mins to charm Kenyans in the debate which is a play of logic, but emotions and ultimate showmanship to connect with voters and sway the undecided voters.

Raila stayed away from combative politics and throughout the debate, he barely slammed his opponents instead stayed straight on his policies and visions. He also grabbed the chance to defend himself against accusations of inciting Maasai community against outsiders a misquotation that his opponents ran with, Odinga reiterated that he pledged to the Maasai community that NASA government would address poverty issues that have been the driving factor behind the selling of land at throw away prices.

On parallel tallying center, Raila cleverly didn’t dismiss rumors of NASA having a center in Tanzania but said the coalition will have a tallying center in Kenya and in the cloud. Highlights of his address were in single mothers empowerment, reducing housing cost and cost of living. Odinga stated that single mothers will be empowered with funds to help them bring up their children. He promised to enforce rent restricting act to cushion tenants from exploitative landlords. Addressing the high cost of living he said would be his first mandate in office.

“Political debating on television is a contact sport, the ultimate theater of performance, which can determine whether a candidate wins the ultimate prize or not. Debates are important and the declaration by the Kenyan Media to host the 2017 Presidential candidates debate is a step in the right direction of our nascent democracy.” Paul Achar, a communication analyst, and consultant.

While some would argue that the debates barely impact voting pattern and that tribal blocs are untouched for Odinga and Kenyatta some scientists would argue in contrary. Kenyatta’s chances of winning in the first round have declined to 49 percent from 62 percent in May, according to Emma Gordon, senior analyst at Bath, England-based Verisk Maplecroft.

The race is “too close to call accurately” and avoiding the second ballot has become more difficult, Gordon said. The government’s “mishandling” of maize shortages may boost the opposition by swinging undecided voters away from Kenyatta, Gordon said.

Nonetheless, Kenyan politics are always full of surprises, and no prediction is really safe. Opinion polls are not an exact science, and people can change their minds about whether to vote and who to vote for, on the basis of a good or bad campaign which is why the last minute campaigns are crucial. The elections are also becoming increasingly close, as the NASA campaign picks up speed. Raila Odinga and NASA could still win the presidency, and the outcome will probably be determined by the turnout in the NASA and Jubilee strongholds. The winner of 8/8 is too early to call but based on his performance at the debate night, one thing is for sure, Odinga won many hearts and his statesmanship show, earned him respect and admiration from even the most of his enemies.