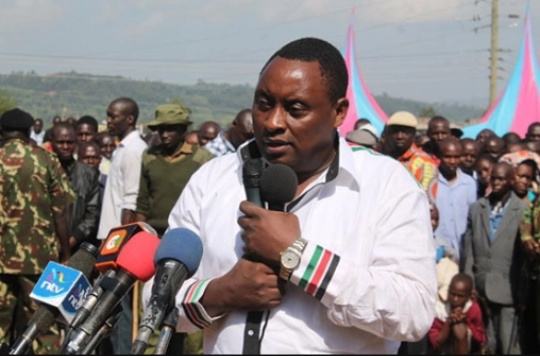 The battle for the North Mugirango constituency seat is turning into a Jubilee Party versus National Super Alliance (NASA) contest. The contest between the two leading coalitions is shaping up even as fringe parties try to steal the show.

The incumbent, MP Charles Geni (Makuti) of Orange Democratic Movement (ODM) party – a NASA affiliate, is clinging to the seat he has held for the last four years. But County Assembly Speaker Joash Nyamoko of Jubilee Party and nine others are proving to be his biggest nightmare as he seeks re-election.

TIFA County Polls released recently, made it white clear to illusionist and cat-walking North Mugirango Members of Parliament aspirants who are trying to unseat the ODM candidate and who is the current Member of Parliament Charles Mong’are Geni. The parliamentary seat has attracted a record of 13 aspirants making it a center of focus.

Through results released, a survey and door-to-door interview was conducted where 2000 respondents were engaged across various wards in an equilibrium manner and priority in the Constituency, MP Charles Mongare Geni who is the bigwig on ODM ticket was in the lead with 42%, coming second was County Assembly Speaker Joash Nyamoko Nyamache on Jubilee Party ticket with 21%,former Member of Parliament for the constituency Wilfred Ombui Moriasi with 11%,Johnstone Obike Ndege with 5%.

Some of the questionnaires that made Hon.Charles Mongare Geni being the most preferred candidate was rated higher given the People’s belief in his development track record-80%, accountability, response and Relationship with his people-70%, party advantage his being ODM Party member-80%. Nyamira country is a NASA stronghold giving the incumbent an upper hand and his relentless support of Raila candidacy has also boosted his ratings.

Related Content:  More Kikuyus Have Access to Power, Money, and Privileges Than any Other Tribe in Kenya.

Joash Nyamoko, the Jubilee Party candidate is also combing the aren’t leaving anything into chances despite obstacles in selling his policies given his unpopular party of choice and scandals that rocked him in the county assembly are haunting him as well. He’s accused of presiding over multi million scandalous deals.

Among the 13 candidates who are vying for the seat only 4 can manage to influence at least 5% of North Mugirango residents Votes.’Others’ languishing at the bottom seem to be making their way through to game plan 2022. With 6% undecided the gains could favor Charles whom the locals dance applauds his development record which is the determinant factor.

The race is simply a rematch of 2013 where Geni beat his then and now closest rival Joash in a widened win. The voting dynamics have remained the same and little is expected to change giving the incumbent a clear heads up.

Raila Won Hearts And Probably The Election From The Presidential Debate