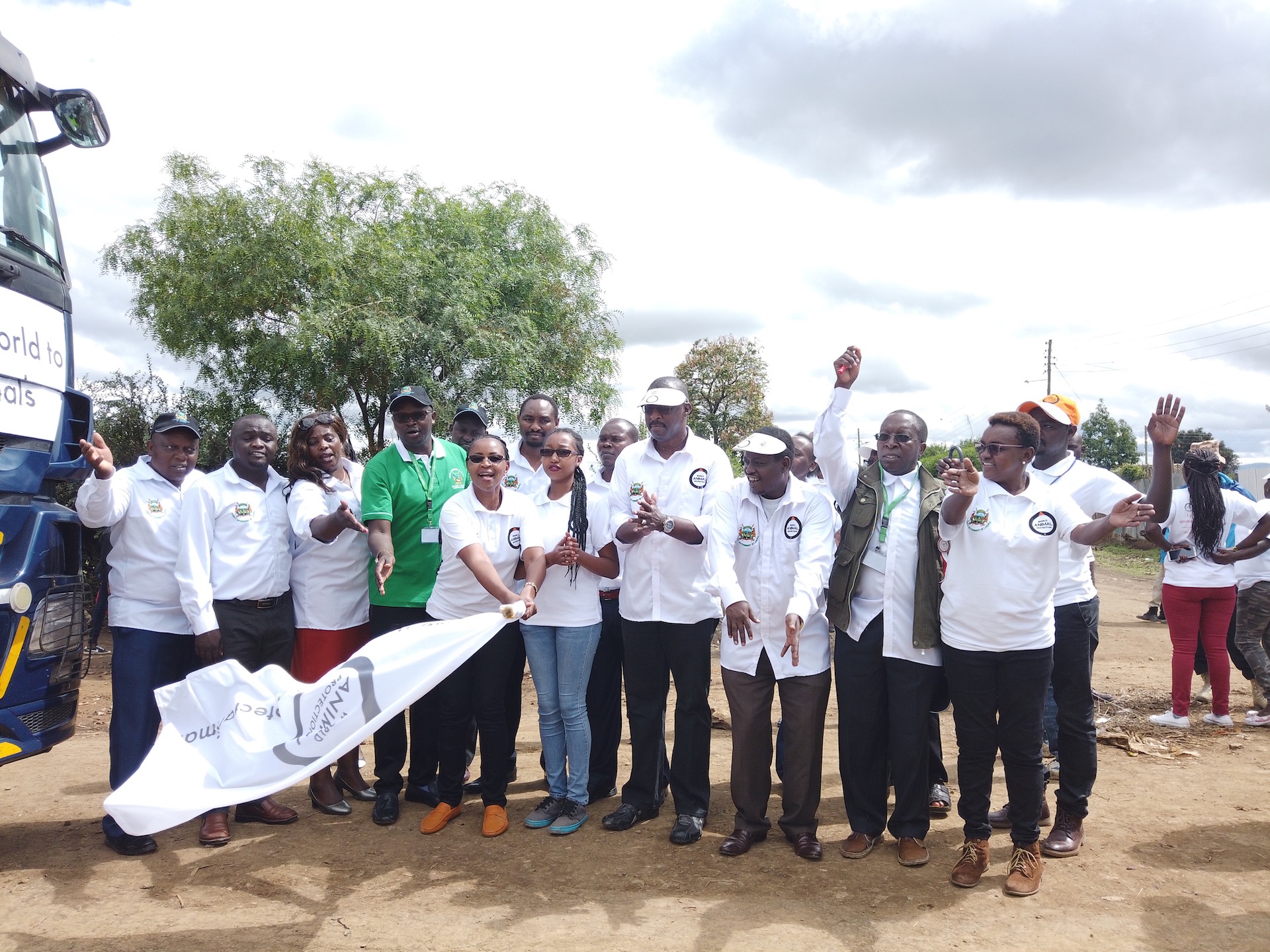 World Animal Protection officials joined by Members of Laikipia County Executive and Legislature to flag off the public awareness caravan toward animal safety.

In partnership with the County Government of Laikipia, Department of Veterinary Services and the University of Nairobi, the public campaign was launched yesterday in Nanyuki town. It strives to facilitate swift response to animals faced by disasters such as diseases, floods, drought, landslides and fires. All partners and members of the public signed a pledge committing to protect animals.

“Every time disaster strikes, livelihoods and productive assets are affected among them livestock and working animals. The negative effects are destructive on the family unit and overall community resilience. The Animal in Disasters initiative seeks to invest and enhance animal protection through effective disaster preparedness and response,” said Tennyson Williams, Director for Africa, World Animal Protection. 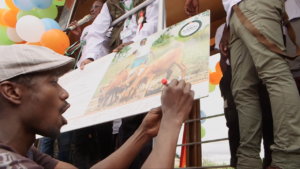 A resident of Nanyuki signs the pledge that rallies governments and the public to protect animals during disaster.

World Animal Protection is supporting countries achieve the Sendai Framework for disaster risk reduction (2016–2030) whose main objective is to reduce disaster risks that undermine development. This year’s Animal in Disastersinitiative is running in South America (Costa Rica, Brazil and Mexico), Asia (India & Thailand) and Africa (Kenya) with the global initiative having converged in Geneva during the global United Nations Disaster Risk Reduction (UNDRR) meeting held from 13 – 15 May 2019.

In Africa, represented by Kenya, the campaign will supportthe development of animal disaster funds (ADF) in partnership with the government at national and county levels. Once established, the ADF will facilitate rapid response to animal disasters caused by notifiable diseases and natural hazards. 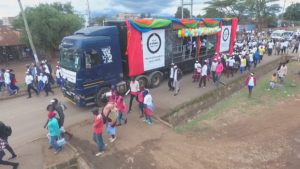 Members of the public and partners marching within Nanyuki town during the launch of the Animals in Disaster Campaign.

“Livestock husbandry being a devolved function, we have made great strides toward the protection of animals through legislation and deliberate projects that promote animal welfare. We continue to work with the World Animal Protection and line partners, scaling up our operations to ensure we safeguard animals from common disasters,” noted Dr. Lucy Murugi, County Executive Committee Member for Agriculture, Livestock and Fisheries, Laikipia county.

It will also develop and disseminate disaster preparedness information to animal owners and the public; integrate animal welfare and disaster risk reduction into livestock extension services, also develop and upgrade livestock infrastructure to be disaster-ready to support relocation and recovery. 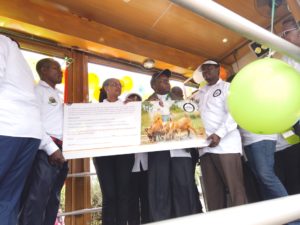 Members of Laikipia County Executive and Legislature holding the pledge that rallies governments and the public to protect animals during disaster.

This will guarantee immediate relief to animals affected in disasters, an angle that has not been prioritized by the disaster response and management bodies.  Past rescues have focussedon saving human lives overlooking the protection of key livelihoods and productive assets such as livestock and working animals.

The launch was graced by Mr. Tennyson Williams, Director for Africa, World Animal Protection, Dr. Lucy Murugi, County Executive Committee Member for Agriculture, Livestock and Fisheries, Laikipia county, Members of the County Assembly and representatives from the Department of Veterinary Services and the University of Nairobi.