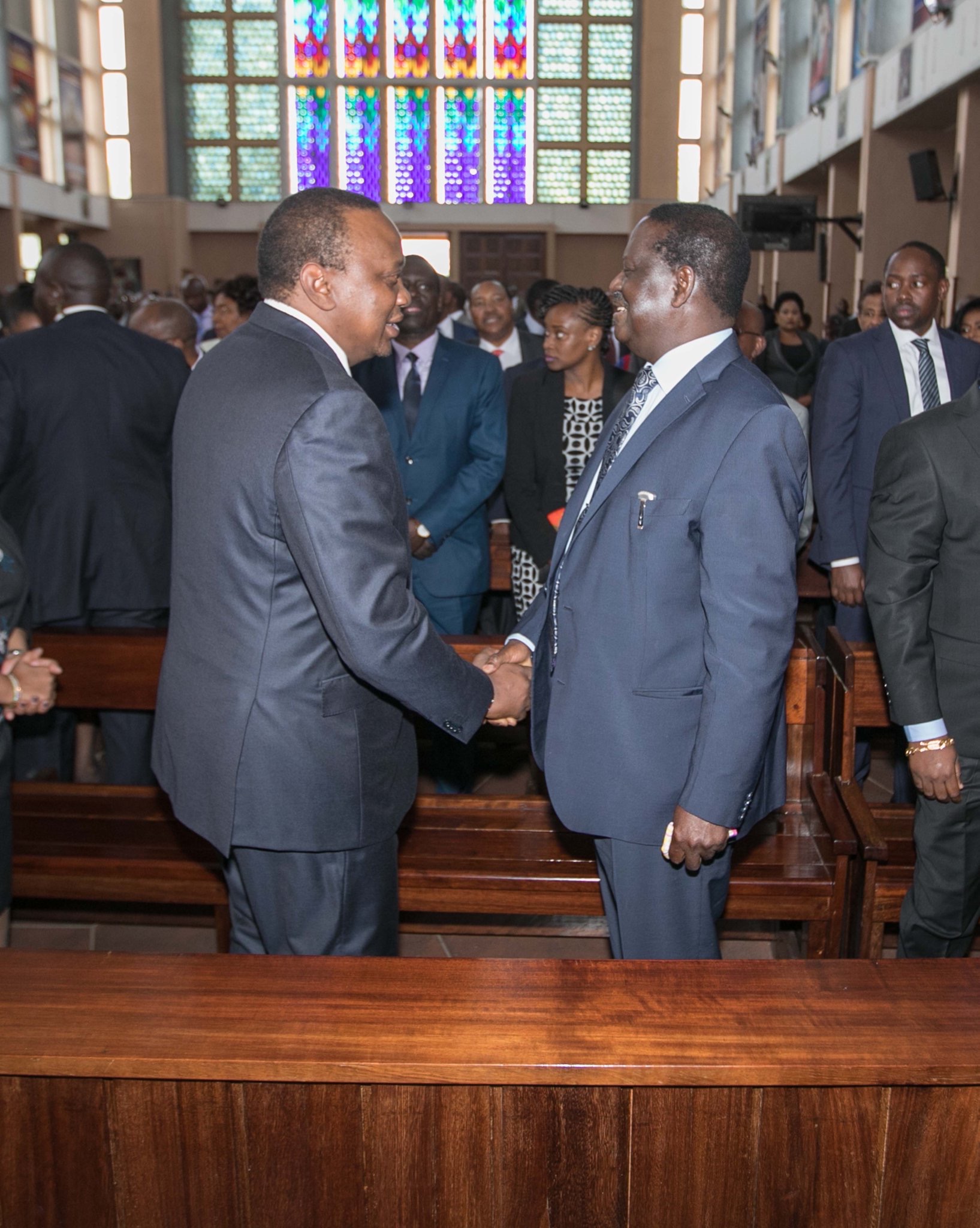 President Uhuru Kenyatta today said his famous handshake with former Premier Raila Odinga on the steps of Harambee House has a deeper understanding than some politicians think. The President said the process leading to the meeting with the opposition leader was carefully thought out and fashioned with the ultimate aim of building a stronger, united and cohesive nation.

“There is a much deeper understanding between myself and Raila Odinga; an understanding that is driven by the desire to ensure that we leave this country much stronger, more united and more focused than it has ever been,” said President Kenyatta. He spoke during the 40th anniversary memorial service in remembrance of the founding father of the nation, Mzee Jomo Kenyatta held at the Holy Family Minor Basilica, Nairobi.

Before the memorial service , the President led family members that included Mama Ngina Kenyatta and First Lady Margaret Kenyatta in laying wreaths at the mausoleum of the former Head of State  at parliament grounds. President Kenyatta said that the building bridges initiative is in keeping with the spirit of the nation’s founding fathers who held dreams of a united Kenya.

The Head of State said a time comes when leaders must let go of petty politics and come together for the fundamental issues that make Kenya a celebrated nation and in the process fostering national unity and progress. President Kenyatta cautioned some politicians to stop misinterpreting the handshake and its intentions but rather focus on its bigger agenda.

He said the bigger agenda of the handshake will allow Kenyans to work together and compete without considerations of tribe or religion. “What we are aiming at, is that politics will never again drive our country to bloodshed, destruction of property and animosity,” said President Kenyatta adding that in future a Kenyan should be able to seek elective office in any part of the country. On corruption, President Kenyatta called on all Kenyans to come together and hold hands against the vice.

The Head of State said Kenyans cannot access adequate healthcare and education if they do not completely eliminate graft. “We must work together and eliminate corruption so that our people can get the services that are due to them as citizens of this republic,” added President Kenyatta. The President said the founding father of the nation had made many achievements to consolidate the young nation but also faced challenges that confront all human beings.

“We are not here to glorify the man. He was human, and being human, there were great things he managed to achieve for this country and there were also issues that he was confronted with just like all of us,” said President Kenyatta. He said there is need for Kenyans to learn from the mistakes of their forefathers, in their efforts to achieve the dreams enshrined in the national anthem about the unity of the nation, peace within its borders and harmony among its people. 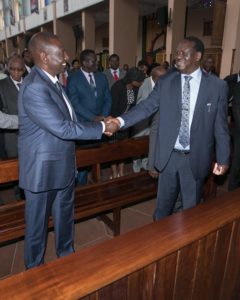 The DP Ruto And Raila shaking hands at the memorial

President Kenyatta added that history can only remain relevant if it teaches people about the mistakes of the past and how to confront them adding that history gives a nation its soul. President Kenyatta said the country is yet to completely subdue the same challenges that faced our forefathers including education, health and alleviating poverty.

Deputy President William Ruto described Mzee Kenyatta as the epitome of hardwork, enterprise and wealth creation. “He consolidated the country into a nation. He left a legacy of hardwork, enterprise and wealth creation,” said the DP. The memorial service-cum eucharistic celebration has been observed every year by sitting Presidents since Mzee Kenyatta’s death. Earlier at State House, Nairobi, President Kenyatta hosted members of the former Presidential Press Service led by former long-serving PPS head Lee Njiru. Mr Njiru was accompanied by  Samuel Karoki, Kibote Kimemia, Robert Ngatia, Hosea Njuguna, Irene Waruguru, John Omenda, Moses Sakwa and Immanuel Okoth, all of whom were on duty in Mombasa when Mzee Kenyatta passed on.

The Star Pulls Down Story, Waiguru Suing IPSOS As Pollster Ranks DP And The Governor Most Corrupt Politicians In Kenya.