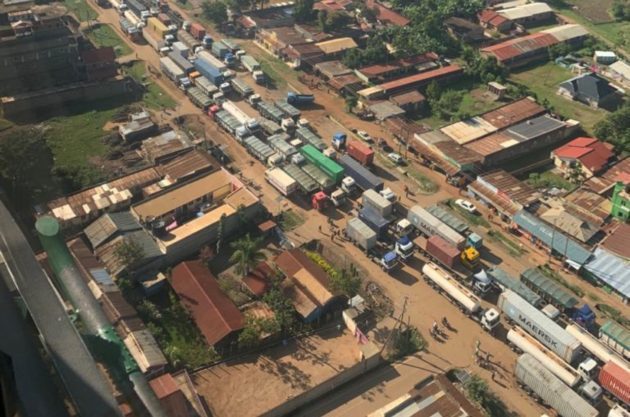 I am a resident of Busia County, a Kenyan and a strong proponent for regional trading blocks.  I know your docket is very heavy and such county-related matters easily get forgotten. The state of the transnational road that links Mombasa to the Great Lakes region through Busia town is an eyesore, an embarrassment to the country and has made us a laughing stock by the rest of our neighbours.

That Busia still remains a one-street town, even with increased traffic, population growth and impact of trans-border movement, the sight of long-distance trucks queuing for miles as they wait for clearance at the border point, and the dust in the town as vehicles try to make their way using any possible space away from the congested road is killing that town.

The story of preparation by Kenha to commission expansion works have been in the pipeline for long, and emergency intervention is required. I am sure, you have a lot of correspondence on the same including from Governor Sospeter Ojaamong. The latest was by the President of the Kenya National Chamber of Commerce and Industry Richard Ngatia and Dr Paul Otuoma, the chair of the Privatization Commission during the recent business open day in the town. They promised to remind you on the state of that road and the adverse effects it is having on private businesses who are struggling with the negative impact of the COVID-19.

Without rehabilitating and expanding that main transnational road, other great national development projects like the One-Stop Border Post (OSBP) which was commissioned at the Busia Border by the heads of states from the East African region cannot succeed. They will remain clouded by the dust from the plantation called a road.

Suffice to note that currently, the general infrastructure linking Kenya with her neighbours in the West through Busia town are not developed and have no transport linkage. Sadly, in addition to the depilated one street, non of the water points have properly developed landing points across the many water bodies while the airstrip became a museum. While the Malaba border point is a bit organised and orderly, the failure to actualize the Mulwanda border point, earlier gazetted by President Kibaki’s government remains a project on paper.

There were plans to make Busia a dry port – where some of the clearing business at the port of Mombasa would have moved to Busia translating into more investment opportunities and income generation to the county government with far reaching effects on regional trade, and we were excited. Our hopes are dwindling.

Sir, many recent feasibility studies done in the county show that, in addition to the port potential as a link to the great lakes region and central Africa, which requires that road improved and expanded, the country has a huge potential for cement production, organic fertilizer manufacturing plant, and Cassava and sugar production on large scale. The proximity to Lake Victoria and Rivers Sio, Nzoia and Yala and the possibility of gold deposits in Samia Hills make the County richly endowed. But with the current transport challenge, very few private investors will risk their money. That message came out from several speakers during the business open day.

There is a lot of goodwill and the County Government has enacted very conducive laws and policies to spur in and across border trade, but the road remains a stumbling block. The county has abundant natural resources including and competitive workforce, favorable weather and climate that is conducive to business in agriculture, strategic location making it a gateway to Uganda and Central African which offers unique business opportunities, stable communication structure, and financial institutions, availability of business support institutions, agencies and market for finished products.

The tourism potential in the county will greatly improve through re-working the airstrip and building the water landing sites along with the various water bodies – the county has tourism sites including Kakapel rock art museum, captivating Kakapel caves, rock painting found at the Kakapel national monument in Teso North, rocky hills of Kisoko and the Lake Victoria viewpoints including boat racing sites for both bating riding and water raffling on beaches such as Osieko, Bukuoma, Marenga, Bumbe, Sisenye and Busijo beaches. Che’s bay resort along the lake in Bukoma has been a place of choice for many local and international tourists, save from Uganda because of unfriendly landing sites.

The rehabilitation of that main road in addition to transforming the town from a one street town, will be a major a legacy project for this government by way of opening up transnational trade, enhancing value addition and manufacturing in the county thus creating employment among others.

The next letter will be to the CS Trade and National Treasury: We need to discuss the issue of preference taxation and increasing the competitiveness of Kenyan products at the border looking at what our neighbours are doing.