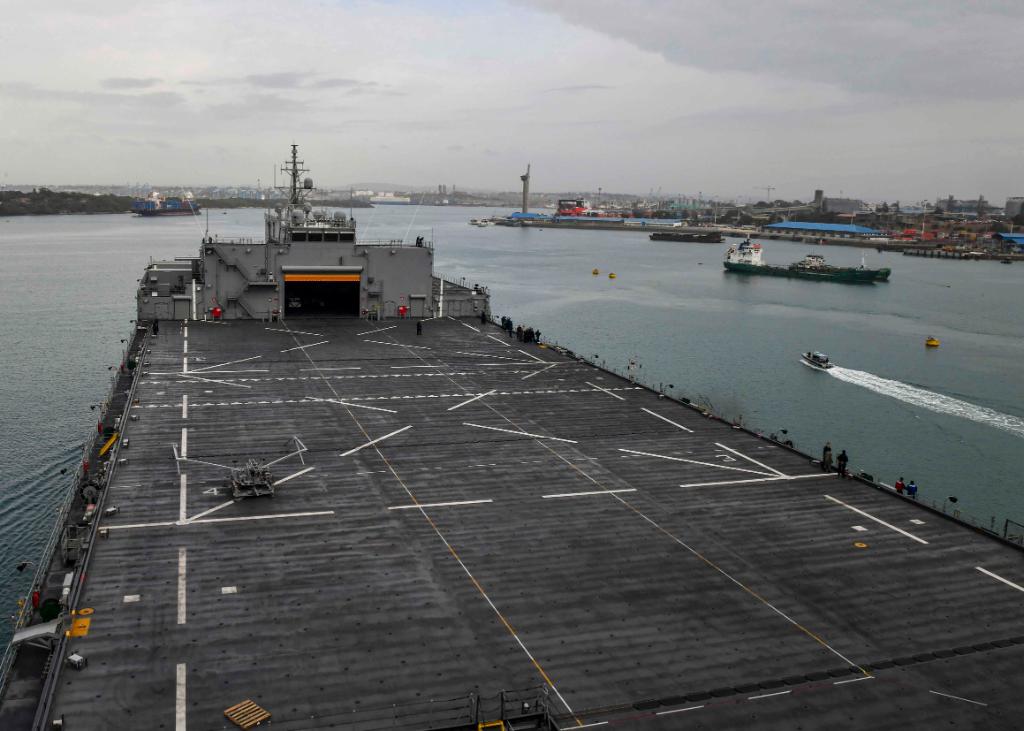 The United States of America has deployed a highly sophisticated military ship to boost maritime surveillance along the Kenyan Coast territorial waters.

The Expeditionary Sea Base USS Hershel “Woody” Williams (ESB 4) artillery vessel, which docked at the port of Mombasa on Monday, is the first US naval ship deployed to the Kenya coast in over a decade.

Senior government officials led by the Defence Cabinet Secretary (CS) Monica Juma and local journalists were conducted on a tour of the highly advanced military vessel on Tuesday.

Others who witnessed the state-of-the-art technology and other security features of the ship which is the second in the Lewis B. Puller class of expeditionary sea base vessels included Mombasa Governor Hassan Joho and Director General of Kenya Coast Guard Brigadier Vincent Loonena

The784-foot long Ship named after retired Marine Corporal Officer Hershel Williams is made of a 52,000 square foot and four spot flight deck for the landing of helicopters. It also has a capacity of 250 personnel who mainly consist of civilian mariners and sailors.

To ensure strict adherence to Covid-19 protocols, the journalists invited to cover the event were tested last Sunday at Mombasa Hospital which was sponsored by the US government.

Speaking after the tour, Rear Admiral Jeff Spivey who is the Director of Maritime Partnership Programme, US Naval Forces in Europe and Africa and Vice Commander US Sixth Fleet, Naples in Italy hailed the existing cordial relationship between the United States and Kenya.

Spivey said the arrival of the ship was clear testimony of the close ties between the two countries, which he said are committed to foster strong partnership in security and economic matters.

“We look forward to working with the Kenya Navy in future military exercises and also share intelligence information and exchange ideas,” he added.

Kenya has benefitted from US assistance in the professionalization of military forces, increase in counter terrorism and border security capabilities, increased maritime security awareness and to improve peacekeeping capabilities.

In 2018, the two countries elevated the relationship to a Strategic Partnership and established a corresponding annual strategic dialogue.

Nairobi Expressway Will Be Complete Ahead Of Times, Says CS