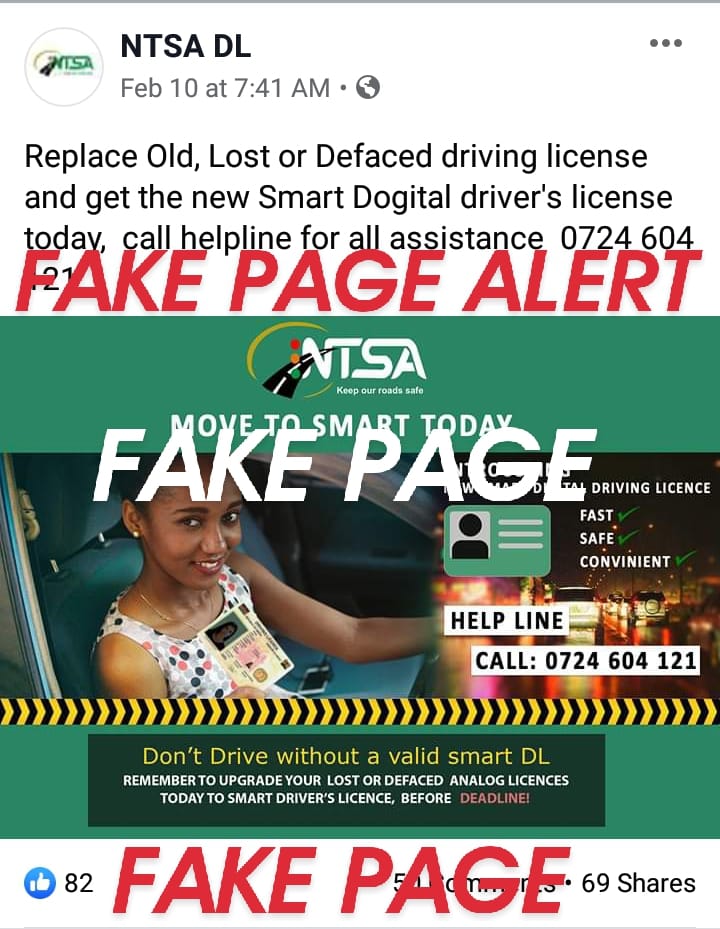 The National Transport and Safety Authority (NTSA) has distanced themselves from a facebook page titled ‘NTSA DL’ that was purporting to be replacing old, lost and defaced driving licenses and giving out the new Smart Digital driver’s license.

“The Public is advised to be aware of individuals purporting to be issuing Smart Driving Licences through a Facebook page titled *NTSA DL* .

The Authority does not manage such a page and has reported the matter to the relevant government agencies for their action.

As investigations are undertaken, we urge members of the Public not to transact through that page and request anyone who has been conned through it or the mobile number 0724604121 to report to the nearest police station” the notice reads.

Over 10,000 people had liked the fake page before the alert was issued and a huge chunk is suspected to have been conned.

A spot check by Kenya Insights on the number  +254 724 604 121 that was used to con people shows it is registered under John Kirii Mburu.

NTSA had set an ultimatum for drivers to apply and acquire the new look smart driving license. drivers have until July to get the digital license or risk attracting huge fines and in the heat of the moment and rudh, opportunists like Mburu are not scarce, Be safe!

Kenya Insights allows guest blogging, if you want to be published on Kenya’s most authoritative and accurate blog, have an expose, news TIPS, story angles, human interest stories, drop us an email on [email protected] or via Telegram
Related Content:  NTSA Warns Against Fake Number Plates
Related Topics:
Up Next