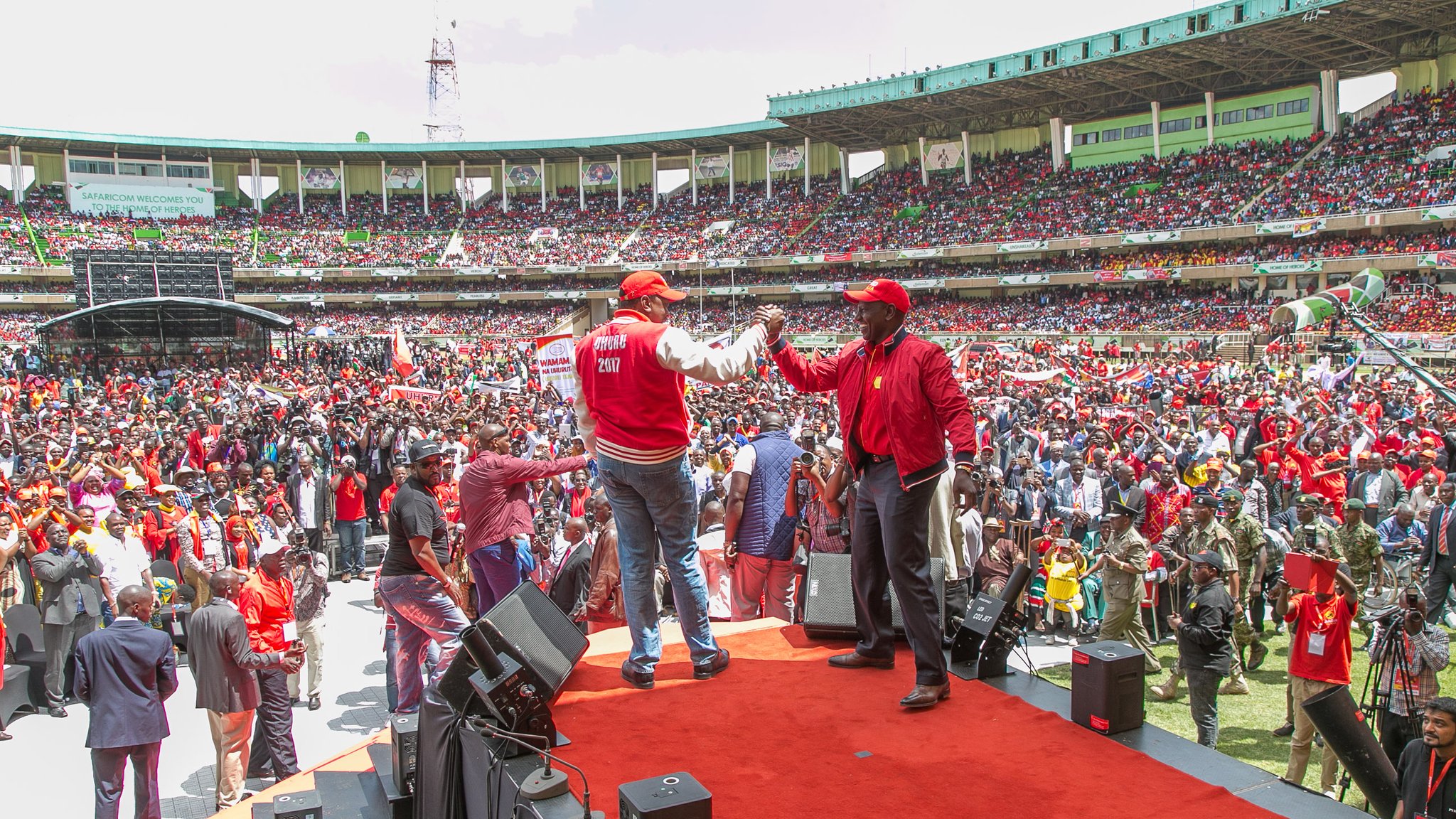 The national campaigns for 2017 elections officially kicked off on Saturday when ODM declared Raila as their unanimous Candidate for the presidential race and Jubilee Party killing affiliate parties into one in what was a glamour filled ceremony.

It was dance and jubilation at the well attended merger ceremony at Kasarani Stadium, more than forty defectors from opposition parties were unveiled and Jubilee aspirants took the platform to strengthen their bid. Billions splashed on the event that has major ssideshow of delegates complaining over unpaid alllowances and it being slashed from the promised Sh20,000 to Sh,3,000 to even worst cases delegates from rural being stranded.

Now that the party mode is off, time for a reality check. The merger coincided with coming into law legislation that restricts party hoping. Knowing the voting patterns, next elections will still remain a two horse race between now unveiled Jubilee Party and CORD. Candidates who will win the party tickets in respective strongholds during the nominations will have the upperhand in the General elections. The nominations in respective party’s strongholds doubles as the final election, Party advantage is key in the end ballot.

With affiliate parties now swalloed into one Jubilee Party, the nominations is a do or die for everyone. The Politicians pictured dancing and shouting their lungs out in not during the merger, could go into deep depression any minute. In the previous election where the coalitions left open for affiliate parties to nominate candidates individually, disgruntled aspirants took advantage and jumped into an affiliate party within their coalition after nomination spat out. This time things will be different, in the case of Jubilee, there won’t be any open affiliate party to run into, Party hoping also restricted by law. In street language they say sh*t about to get real.

Jubilee Party nominations are slotted for next year May,within the next remaining months, major fallouts and realignment should be anticipated. Candidates have to seriously consolidate and not make a guess about everything, this is no gambling, you lose out on the nominations, you wait for another shot in 2022, knowing the huge power appetite for the incumbents and new entrants, Plan Bs should or rather already in place.

Serious fallout in Jubilee strongholds, inevitable as the nominations will be a do or die foreach candidate. Take for an example Kiambu County where Kingpins Kabogo and Waititu are battling it out,Nairobi we have Sonko,Wanjiru,Sakaja,Waweru and Wamalwa both strong Jubilee aspirants fighting it out for the ticket, not unless a boardroom deal is inked to accommodate everyone, expect sizable noise.

We’re looking at a wave of independent candidates ahead of 2017 and scheming new parties cashing in on the developing events. In the last elections, Kalembe Ndile’s TIP maximised on the nominations fallout by selling certificates to disgruntled candidates.

Other possible scenerios ahead; there will be voter apathy in the general election because those defeated in nomination will not care to campaign for anyone hence their supporters will see no reason to go and vote. It will be the end of the road for many politicians especially if you have been a governor and now you lose in nomination. Expect candidates to spend heavily on the nomination. In worst case scenarios, look out for political assassinations as the last resort to remove stumbling blocks. Perhaps it now makes sense why Kabogo is moving around in an armoured car as if he’s in Afghanistan.

Expect 80% of sitting MPs,Governors to be sent home, this from historical voting patterns. Politicians faced with possible extinction and fallout in Jubilee Party but until then…ile le le yo

Kenya Insights allows guest blogging, if you want to be published on Kenya’s most authoritative and accurate blog, have an expose, news TIPS, story angles, human interest stories, drop us an email on [email protected] or via Telegram
Related Topics:JubileeOpinionPoliticsUhuru KenyattaWilliam Ruto
Up Next