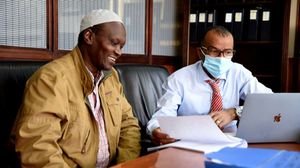 Yusuf Mugweru (left), one of the Tuskys Supermaket directors, and his lawyer Philip Murgor consult at Murgor & Murgor Advocates on September 23, 2020. PHOTO | NMG.

The debt ridden retail chain Tuskys that has been on distress and a familiar route of downfall is facing even more hurdles just when they thought a repeat had come their way over a possible Sh2B injection to get them out of the more than Sh6B debt hole.

Tuskys is seeking to sell a majority stake to a consortium made up of a private equity firm and an undisclosed foreign retailer as part of efforts to raise cash to pay suppliers and win back their confidence.

But this deal has stirred a new set of rows and confusions to the desperate company.

According to news reports, the undisclosed foreign investor in tax haven Cayman Island is willing to advance the ailing Tusker Mattress Limited with Sh2B but on ridiculous terms as holding the entire shares of Orkam as security which will be converted to equity on default.

What this means is the current shareholders of Orakam Holdings which is the mother firm owning 100% stakes in Tuskys has to give up the shares to the investor. In the event of a default on the loan, the investor then becomes the main shareholder.

Sources familiar with the share sale deal say that the potential investors are concerned about committing resources to a deal that could be scuttled by insiders.

They are also fretful about the possibility of ending up with an aggrieved minority shareholder who could rock the boat from within. The jitters are based on previous fallouts that saw Mr Yusuf Mugweru in 2018 scuttle a merger deal between Tuskys and then cash-strapped Nakumatt, which has since collapsed.

Orakam Holdings shareholders who’re the children of the founder late Joram Kamau include; Stephen Mukuha, Sammy Gatei, Yusuf Mugweru and George Gachwe each own a 17.5 percent stake in Orakam. John Kago, Mary Njoki and Kenneth Njeri who each hold a 10 percent stake in the company.

The sibling rivalry has seen them in endless court battles and this is a reason of concern to possible investors whore now putting the demands of the firm committing the shares.

One of the significant investors in supermarket chain Tuskys, Stephen Kamau, has obtained court orders allowing the cash-strapped retailer to fast track a shareholder meeting to approve the injection of new capital.

The move is also seen as a manoeuvre to pre-empt obstacles to the planned meeting by another significant shareholder, Yusuf Mugweru, who has been wrangling with his siblings in the family-owned business.

A meeting of shareholders has since been set for 28 September where they’ll have the issue of committing the shares on the table.

Tuskys had earlier estimated that it needed at least Sh2 billion to survive in the short term as piling debt led to supplier defections, stock-outs and closure of some stores.

Should this injection be approved and Tuskys rebounds to profitability, they’ll pay the debt and get back their shares. Should it fail then the investor takes control of the company.

What doesn’t make sense in this deal is why the unnamed investor would commit all that money to a company that its profitability is uncertain. If Tuskys drowns, it will leave the investor with nothing but empty assets not enough to recover the debt, which begs the question of why risk all Sh2B with a side eye on high failure? It’s like throwing a fish in the lake and hoping it comes back to you.

Another possible explanation of the mysterious investor’s motive is someone likely a Kenyan looking into launder back money from the tax haven and that’s why the idea of company’s profitability is not important to them.